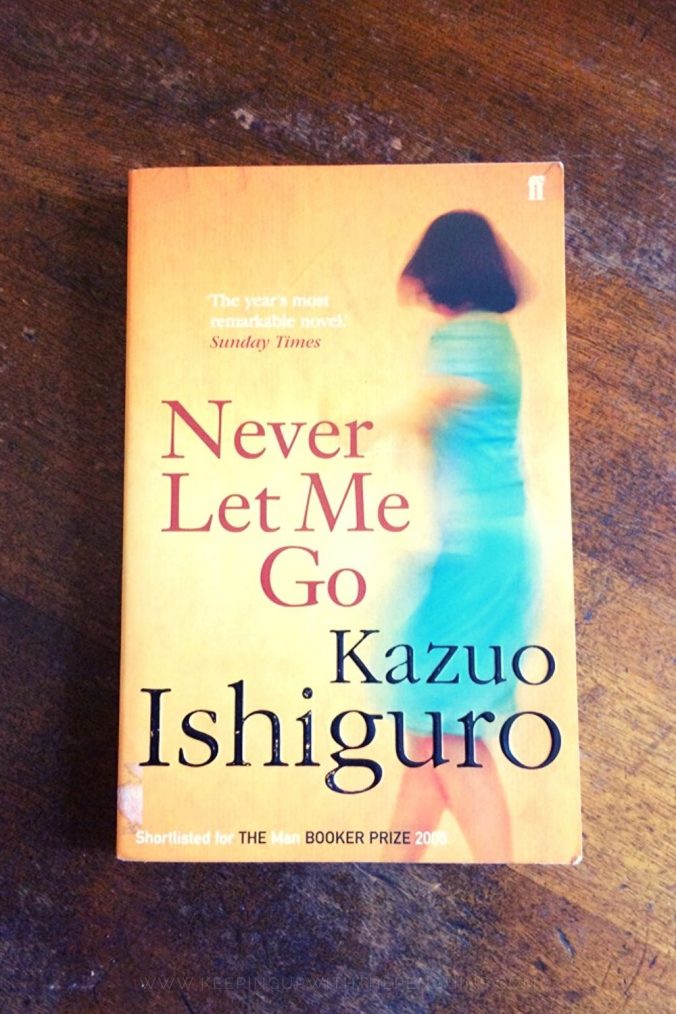 It’s some kind of miracle that Never Let Me Go wasn’t spoiled for me before I finally got around to reading it. Kazuo Ishiguro’s dystopian alternative reality novel was published nearly 20 years ago, and I’d heard some vague hints giving rise to suspicions about the Big Twist, but I still went in with no firm idea as to what was about to happen. That’s important, because you’re not supposed to know Never Let Me Go is dystopian science fiction until Ishiguro wants you to.

Ishiguro drip feeds the story to the reader, mentioning something offhand and then paying it off satisfyingly quickly (usually in the next chapter). It makes Never Let Me Go very just-one-more-chapter-y, which is a good thing if you’re looking to be sucked into a book, but not so good if you’ve got an early morning and it’s past your bedtime. If you want to go in unspoiled and enjoy that experience for yourself, exit this window now.

It all begins with Kathy H, who describes herself as a “carer”, talking about looking after organ donors. As she describes her twelve years in the role, she starts reminiscing about her days at Hailsham, a boarding school where the teachers were called “guardians” and the children’s art was selected for display in a gallery owned by a mysterious woman known only as “Madame”.

In her time at Hailsham, Kathy became particularly close to two other students, Tommy and Ruth. Kathy was Tommy’s confidant, supporting him through periods of bullying and depression, but through the usual social politics of adolescent, he ends up being Ruth’s boyfriend instead.

The first clang! reveal comes around 80 pages in, where it’s revealed that the children of Hailsham are effectively being farmed for their vital organs. That’s why the teachers- excuse me, guardians – have been so intense about not smoking and taking care of their bodies.

All the children know about their futures – and all we, the readers of Never Let Me Go, know – is gleaned through rumour and supposition, and the occasional slip-up where one of the adults in charge reveals something they “shouldn’t”. One of the guardians, Miss Lucy, is fired and removed from the school for telling the students too much.

That’s why horror author Ramsey Campbell called Never Let Me Go one of the “best horror novels since 2000”, a “classic instance of a story that’s horrifying, precisely because the narrator doesn’t think it is”. In large part, Never Let Me Go is a boarding school novel, a dark academia story about cliques and gossip and young romance, but the world that it’s taking place in is completely bonkers.

The next clang! comes at 140-ish pages, where Ishiguro reveals that all the children at Hailsham (and other similar schools around England) are cloned. So, this is kind of like the real-life situations where parents genetically engineer new babies to act as organ donors for their existing children who are crook. It’s dicey territory, ethically – to say the least.

As Kathy, Ruth, and Tommy age in Kathy’s recollections, they move out to a kind of halfway house and they start venturing out into the real world. This leads to some pretty harsh realisations: that they’re not going to have the kinds of lives or careers they see people leading in magazines or on television, that they’re going to have to undergo surgery after surgery only to die (or “complete”, as they euphemistically call it) very young, that they likely weren’t cloned from the creme de la creme of society (i.e., that underprivileged people – “human trash”, Ruth calls them – were exploited for their DNA).

Never Let Me Go comes to a head when Ruth “completes”, and Kathy and Tommy believe they finally have a shot at being together. They seek out the mysterious “Madame” from their school days, to see if maybe she can give them a stay to delay their donations so that they might spend more time together. Now, this is where Never Let Me Go first really disappointed me. I didn’t like the big clump of exposition that came around page 240. It’s a huge info dump where Madame and Miss Emily (the former Hailsham principal) explain to Kathy and Tommy why the school existed, and how society views them. It’s straight out of a B-movie playbook, akin to a hacky villain monologue in the penultimate scene.

Still, there’s a lot of very clever stuff in here – it’s easy to see why Never Let Me Go is favoured by Book Clubs For Smart People, you could talk it over for hours. Look at the role of “carers” like Kathy, for instance, in the reality Ishiguro has created. For the clones, being a “carer” is the only alternative to becoming a donor oneself, the only version of agency they have in their lives. The whole system is engineered to prevent them from thinking too much about what is happening to them and rebelling in any way (not to mention that it keeps a safe, convenient distance between the people who donate and the people who benefit from the donation). You don’t have to look too hard to find the parallels in our actual reality.

For some reason, even though they’re very different, Never Let Me Go made me think about Tender Is The Flesh. I think it might’ve been the contrast between the reader’s experience of the clones as human (having one narrate the story was clever!) and the apparent view of the world they inhabit that they aren’t (or, even if they are, that they aren’t afforded the same rights and privileges) that brought it to mind.

It’s easy to see, in terms of tone and style, that this is the same author who wrote Klara And The Sun. They’re like two halves of the same whole. I can basically guarantee that if you liked one, you’ll enjoy the other. I can’t speak to the 2010 film adaptation – I haven’t seen it yet, but of course now I want to – but this is an intense, smart, compelling read with a lot to say about the reality we live in.

My favourite Amazon reviews of Never Let Me Go:

13 Speculative Fiction Books That Could Be Real