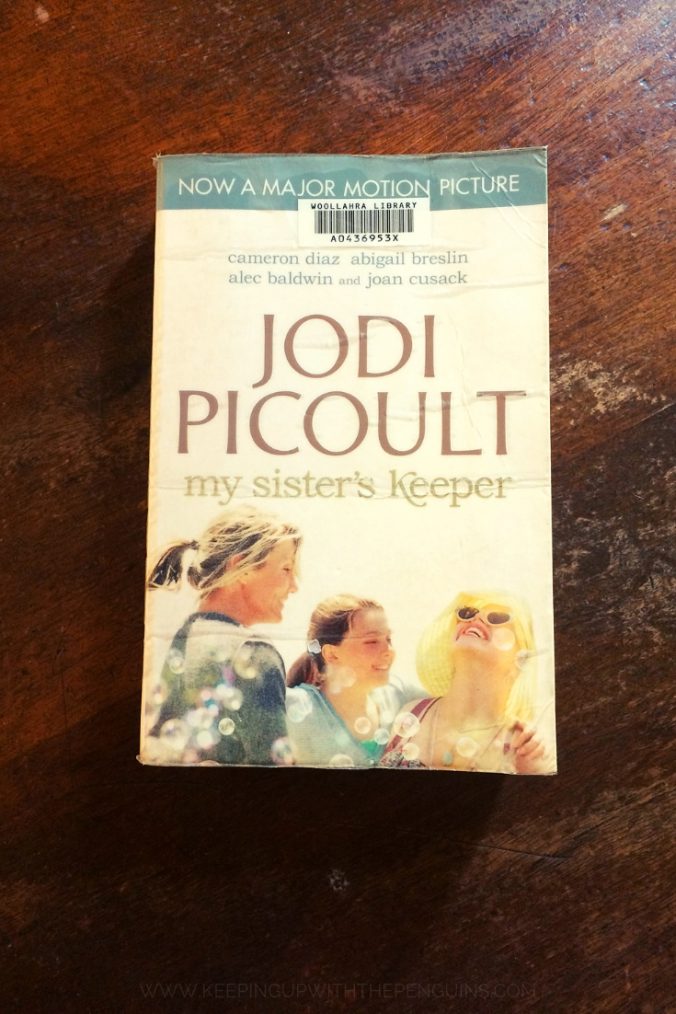 It’s kind of weird that this is my first Jodi Picoult read, especially given how much I love books about moral dilemmas and ethical quagmires (for which she is famous). My Sister’s Keeper is her eleventh novel, but it’s undoubtedly her most widely read and best known – thanks, at least in part, to the controversial film adaptation released in 2009.

Picoult, indeed, tackles a very thorny issue in this one. The main character, Anna, is thirteen years old at the time My Sister’s Keeper begins. She was conceived as a matched donor for her older sister, Kate. Kate is barely clinging to life after a young diagnosis of acute promyelocytic leukemia. She’s been variously saved over the intervening decade through donations of Anna’s umbilical cord blood, blood-blood, stem cells, bone marrow – and now, one of Anna’s kidneys is on the table.

Faced with the possibility of being forced to undergo a major surgery – with the risk of lifelong complications (or, y’know, death) and no guarantee that it will save Kate’s life – Anna takes drastic action. She seeks out flashy lawyer Campbell Alexander to petition on her behalf for medical emancipation from her parents. That would mean that the decision of whether or not to donate a kidney would rest entirely in her 13-year-old hands.

My Sister’s Keeper is told from multiple perspectives, so you get the full spectrum of insight into the ramifications of Anna’s decision. You hear from Anna herself, as well as her lawyer, her mother, her father, her brother, and her guardian ad litem appointed by the court.

Interestingly, you don’t hear from her sister, undeniably the person most impacted by Anna’s fight for emancipation. There’s a good reason for that in the narrative, and let this serve as your warning that this review, from here on out, is going to get spoiler-y.

During the trial for Anna’s medical emancipation, she reveals that she’s actually acting according to her sister’s wishes. Anna would be willing to continue to act as a donor, except that Kate has asked her to stop; she feels she’s ready to die, but surmises that her parents aren’t ready to let her give up the fight. It’s the big “clang” we’ve been waiting for throughout My Sister’s Keeper, saving it from being an expensive high-stakes teenage temper tantrum.

Oh, and there’s a side-plot playing out, too. Anna and Kate’s brother, Jesse, is a secret juvenile delinquent. In a laughably obvious ploy for his firefighter father’s attention, he’s been secretly setting fires in abandoned buildings all over town. This storyline has a nice little denouement, with a confrontation between Jesse and his father, just before Anna’s big reveal… but it’s never really Finished, aside from a throwaway line in the epilogue. Apparently, that one conversation with his father, and his sister’s death (more on that in a second), was enough for Jesse to turn his life around and enroll in the police academy. *shrugs*

Anyway, back to Anna: the judge rules in her favour, and awards her lawyer a medical power of attorney. The lawyer offers her a lift to the hospital to see Kate and tell her the good(?) news…

… and their car crashes. Anna is declared brain dead, and the lawyer grants permission for her kidney to be donated to Kate. Kate lives not-exactly-happily, but ever after, anyway.

Up until that point, I’d been thoroughly enjoying My Sister’s Keeper. I’d been pleasantly surprised by the Picoult’s deft handling of a mightily complex subject, with decent prose and excellent timing. She says, in the Acknowledgements, that her own child had to undergo ten surgeries in three years, so clearly she had heaps of experience to draw on with the sick-child narrative. But that ending? Ooft. It was too quick, too brash, and too melodramatic.

If Picoult was intent on working in this final twist (Anna’s death), she could at least have stretched out the timeline so it didn’t feel so soapy. I mean, a car crash on the way to the hospital? Come on. It was an unfortunate end to what had been, otherwise, a cracking read.

It only made it all the more baffling to me that My Sister’s Keeper readers were so attached to this ending that they metaphorically set the world on fire when it was changed to suit the film adaptation. The movie presents a radically different outcome, plus it emphasises some sub-plots while writing out others entirely. Most interesting to me: this was all done against Picoult’s wishes. Taking an author’s work and changing it, despite her public derision of that decision? Bold. Very bold.

Anyway, all told, My Sister’s Keeper was a winner for me, right up until the very end. Picoult snatched defeat from the jaws of victory. I’m keen to give another one of her books a go, though, to see if her talents have been better applied elsewhere.

My favourite Amazon reviews of My Sister’s Keeper:

The Women Could Fly – Megan Giddings