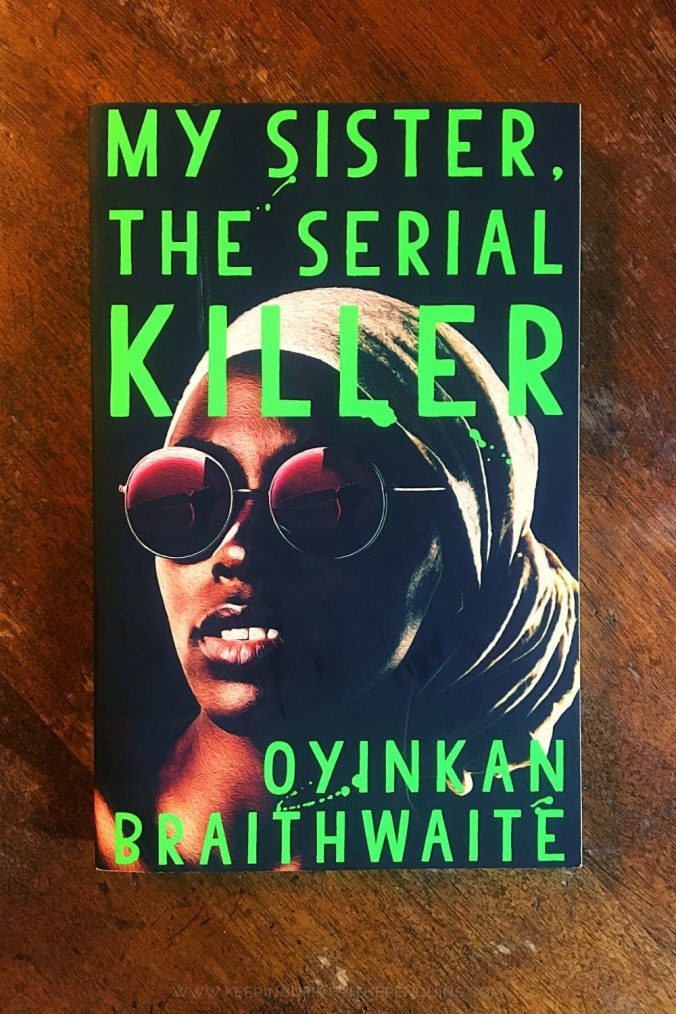 As much as we all love a bit of mystery and intrigue, sometimes it’s nice to read a book with the premise laid out completely in the title. My Sister The Serial Killer gives you exactly what it says on the tin: the story of Korede and her sister, Ayoola, who has the unfortunate habit of killing her boyfriends.

I first encountered Oyinkan Braithwaite at the Sydney Writers’ Festival (she’s lovely, by the way, and she had a queue out the door for book signings after her session). It’s hard to imagine that such an astonishingly dark and laughably twisted plot came out of the mind of such a delightful creature. I’m sure her Google search history must’ve got her on a watch-list somewhere…

But, to the story: as I said, Ayoola keeps killing her boyfriends, and it’s up to Korede to clean up the mess. Korede is literally the person Ayoola calls to help her hide a body (c’mon, we’ve all got one). The story begins with Korede cleaning up the blood spatters of the third man that Ayoola has “dispatched”, and immediately you get the sense that this situation can’t continue indefinitely.

Even aside from the serial murders, Korede and Ayoola have a strange relationship – in no small part due to their fact that their father was horribly cruel and extremely dodgy (in fact, the knife Ayoola uses to off her suitors once belonged to him, a deftly crafted metaphor for the inheritance of violence). Korede feels responsible for her sister, but simultaneously suffers from a bit of an inferiority complex. She’s the “homely” one, while Ayoola is unequivocally the “beautiful” one, with all of the privilege and preference that beauty entails.

The plot boils over when a love triangle forms: Ayoola sets her sights on the handsome and charismatic doctor that Korede has loved from afar for months. Sibling loyalty can only go so far, after all. This forces Korede into the small gap between the proverbial rock and hard place: should she keep her sister’s secrets, or divulge them to the man she loves (possibly saving his life)?

My Sister The Serial Killer thus cleverly mixes crime, romance, and family saga. It’s definitely not a thriller, in the sense that it focuses far more on the sisters’ relationship – and what happens to it under strain – than it does any cat-and-mouse games with detectives. It’s also set in Lagos, with a remarkably strong sense of location and culture that we might more commonly associate with “place writing” (and a “place” that’s sadly not often encountered by Anglophone readers, to boot).

The story unfolds in short, punchy chapters. The family backstory – abusive father, complex mother – is revealed incrementally, in a way that naturally parallels and informs the rollercoaster of the love triangle and the will-she-or-won’t-she (kill again). I must say, I thought My Sister The Serial Killer would be more light-hearted in tone – or, at least, more morbidly humorous. Braithwaite focuses more on moral responsibility and culpability than I expected. There were few laughs, and more “wait, what would I do in that situation?” dilemmas. Is Ayoola empowered, or simply sociopathic? Is Korede doing the right thing by covering up her crimes, or is she enabling a murderer? Is she righteously loyal, or simply blinded by the affection of shared experience?

But, I suppose, I can hardly complain that my funny bone wasn’t tickled when it was such a pleasure to spend time with such complex and intriguing characters. The novel’s conclusion was satisfying without being too “neat”. Braithwaite demonstrates a talent for writing far beyond her years and experience. I look forward to seeing what she comes out with next (“My Brother, The Money Launderer”, perhaps? “My Mother, The Armed Robber”?)

My favourite Amazon reviews of My Sister The Serial Killer:

Nothing Can Hurt You – Nicola Maye Goldberg

7 Books That Will Take You To Another Place