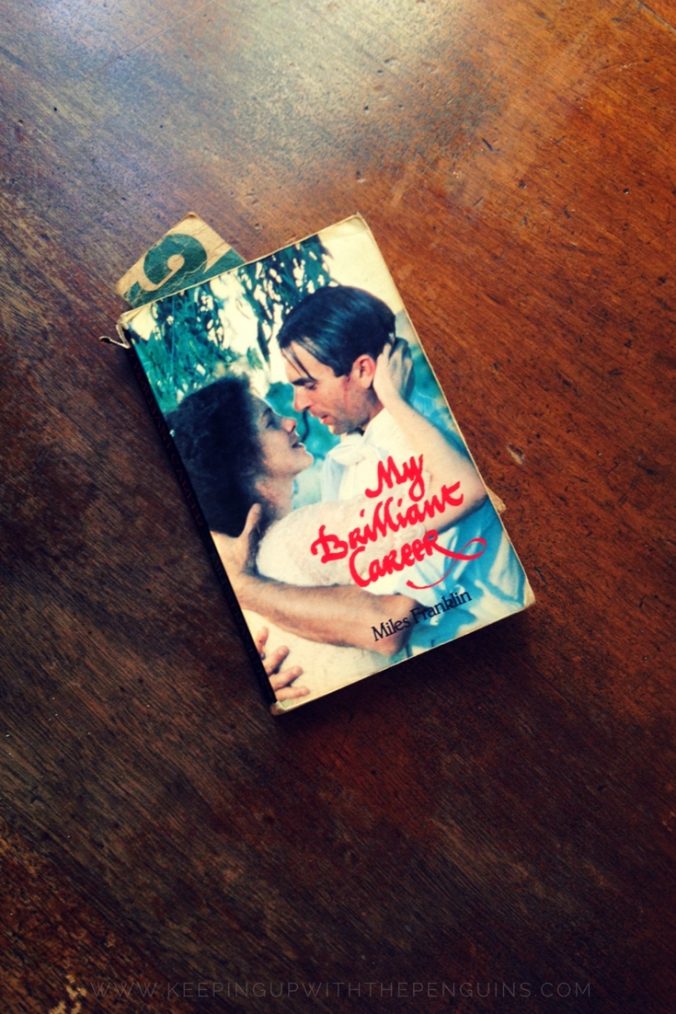 I chose a considerably shorter and more recent novel for my fourth Keeping Up With The Penguins read (I was gun-shy after the mammoth undertaking that was Vanity Fair). I was sure that My Brilliant Career would be knocked on the head far more easily, and I was right (as always).

Published in 1901, My Brilliant Career was written mostly for the enjoyment of Franklin’s friends – until she took a punt and sent it to Aussie literary giant Henry Lawson. He took such a fancy to the story that he added his own preface and forwarded it on to his publishers. That preface itself is notable in that he famously refused to comment on the “girlishly emotional” parts of the book – I mean, I think the story would have been hella boring without them, but I would think that, being an emotional girl and all…

Anyway, Franklin ultimately withdrew it from publication until after her death. Apparently it bore just a little too much resemblance to her real life, and the ignorant bush peasants took offense to being described as such (can’t imagine why).

So, a 16-year-old girl living in the bush writes a story about a 16-year-old girl and the trials and tribulations of living in the bush: shocker. The opening chapters could be summarised as “I have no time for romance, and this book is all about me, so strap in, fuckers!”. Franklin captures the mind of a teenaged girl (Sybylla) perfectly, but that’s really no significant achievement, seeing as she was one at the time of writing.

Teenaged me would have hated this book. I would have found it condescending, and rolled my eyes at the well-meaning adult who handed it over saying they thought it would give me “perspective”. The thing is, angsty teenagers will automatically reject any intrusion on their belief that they are uniquely misunderstood little snowflakes, and Franklin’s book demonstrates pretty clearly that angsty teenagers are all the same and haven’t changed much over the last 100+ years. My Brilliant Career is full of dramatic hand-wringing and tear-soaked pillows and teenage strops. I’m actually kind of surprised I never had to read it in school; it seems right up the alley of an English teacher trying to provide “relatable content” on “teen issues” (à la The Breakfast Club, which we watched approximately four hundred and seventy two times).

Even though My Brilliant Career is determinedly not romantic, there’s a lot of flirting and teenage girl wish-fulfillment. Beecham, the primary love interest, is nice enough to be flattering without being creepy or boring, he doesn’t put up with Sybylla’s shit (but in a flirtatious way, not a mean way), he’s persistent and charming despite falling on hard times, and he wants to marry her even though she’s ugly. Can you imagine? There are no truly dirty bits, but plenty of impassioned exchanges and a random BDSM scene where Sybylla goes all weak in the knees over bruises and horse whips.

Never fear, there’s no sentimentality in the ending at all: Sybylla ultimately chooses a “brilliant career” over marriage, and ends up with neither. Franklin reportedly suggested the title as “My Brilliant(?) Career”, which is laughably more apt, but the publishers vetoed it.

“At the time of my departure for Caddagat my father had been negotiating with beer regarding the sale of his manhood; on returning I found that he had completed the bargain, and held a stamped receipt in his miserable appearance and demeanour.”

The main highlights of My Brilliant Career are the language and Franklin’s turn of phrase, which often made me think of my grandmother (makes sense, given the shared time period and geography). On the whole, though, I found writing this review a little tricky, as I didn’t develop a strong feeling about the book one way or another. It’s okay.

I probably won’t read it again, but I wouldn’t tell anyone else that they shouldn’t bother. Just avoid giving it to your 16-year-old daughter: she’ll hate you for it and go back to looking at memes on Tumblr.

My favourite Amazon reviews of My Brilliant Career:

Australian, Books Made Into Movies

An Apology: Why The List Is Mostly Straight, White Men

How To Finish A Book You Hate