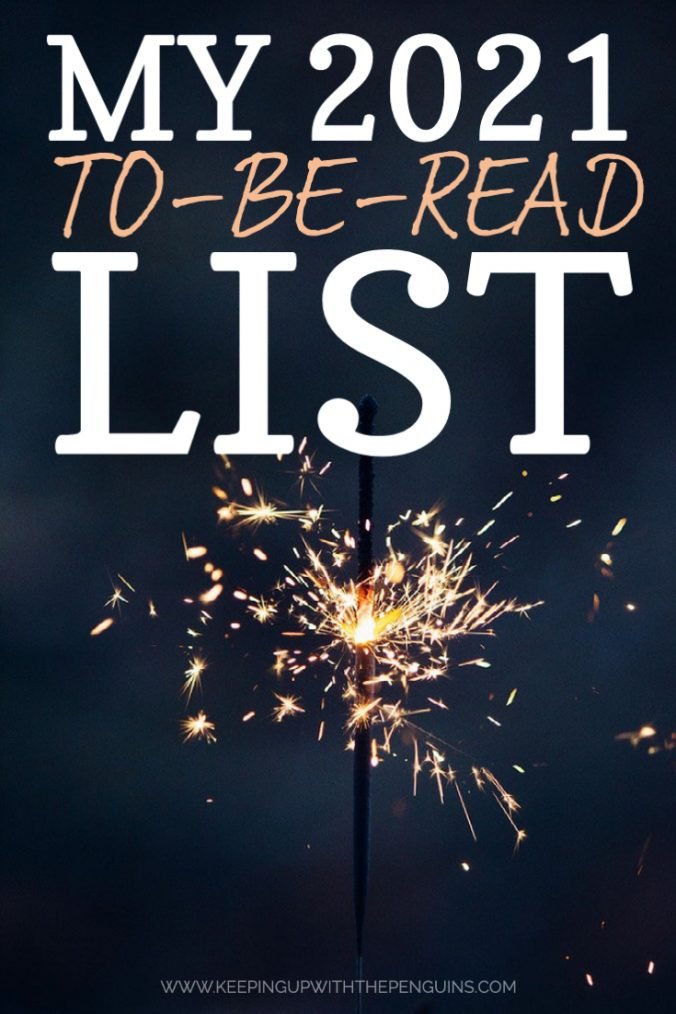 This might come as a shock, Keeper Upperers, but here’s the truth: my to-be-read list is out of control. Like every true booklover, I accumulate books way faster than I can read them. Often, I really struggle to prioritise, because I want to read them ALL in equal measure. As a little resolution-in-advance, I sat myself down with my spreadsheet (yes, there’s a spreadsheet) and forced myself to make a list of books I am definitely, definitely, definitely going to read and review in 2021. You can hold me to it!

A Tale For The Time Being by Ruth Ozeki

I was captivated by the blurb of A Tale For The Time Being from the first time I heard it. It’s narrated by two characters: a teenage Japanese American girl in Tokyo, who keeps a diary, and a Japanese American writer who finds the diary washed up on shore some time after the 2011 tsunami. Everything else I’ve heard about it just makes me want to read it more: Ozeki was the first practicing Zen Buddhist to be nominated for the Booker Prize, it’s her “most ambitious” novel, and it’s full of her “signature humour”.

Atonement was first published in 2001, which means 2021 marks the 20th anniversary of its release. Seems like a fitting time to finally get to it, eh? McEwan has a huge back-list, but Atonement is the one I’ve been meaning to read for the longest (it certainly seems to be the one for which he’s best known). It’s a WWII novel, which normally I’d shy away from, but it sounds like it has a really compelling family drama story at the centre. Plus, I need to read it in order to add the movie to my to-be-watched list!

Update: I did it! Read my full review of Atonement here.

It’s funny how the novel that best encapsulates the Vibe of 2020 was written years before it began: My Year Of Rest And Relaxation. Ottessa Moshfegh’s writing blew me away, her unique talent for crafting female characters in particular. So, I immediately set out on a hunt to find her previous novel, Eileen; it’s been sitting on my to-read shelf for nearly a year now. Now I hope, given the blurb (an unhappy 20-something woman who works in a prison), it isn’t equally prescient of what’s to come in 2021… but even if it is, I’m sure it’ll be a good read.

My Grandmother Sends Her Regards And Apologises by Fredrik Backman

I loved A Man Called Ove so much that I’ve been buying every other book by Fredrik Backman on sight. The one I was looking forward to reading most of all was My Grandmother Sends Her Regards And Apologises (translated slightly differently in some editions). It’s the story of a young girl who loses her grandmother, and slowly discovers more about her grandmother’s life and the lives she touched – sounds hilarious and heart-warming all at once, right? The thing is, I lost my own beloved grandmother in November, and I haven’t been able to face reading anything that might remind me of her ever since. Hopefully, 2021 will see the wound heal over, and I’ll be able to enjoy this one as planned.

I’ve fallen into a fun pattern of reading one Jane Austen each year: first Emma, then Pride and Prejudice, and this year Sanditon (her final, incomplete novel). I’ve got a couple more to go, and I think 2021 might be the year for Northanger Abbey. It was the first manuscript that Austen completed, but it wasn’t published until after her death – a Gothic satire novel about a young woman, Catherine Morland, coming of age. It’s the “most youthful and optimistic” of Austen’s novels, apparently, and I reckon we could all do with a bit of that next year…

It can’t all be super-literary all the time: I want to read a few fun page-turners in 2021, too. That’s why I’m bumping Room by Emma Donoghue up towards the top of the to-be-read list. It sounds really gripping, sad, and scary (what a combo!). The story was inspired by the Fritzl case (in which an Austrian woman and her children were held hostage for years), told from the perspective of a five-year-old boy who was born and has spent his whole life in one small room.

Along the lines of my Austen thing, I also try to read a notorious book each year for Banned Books Week. One that I’ve been meaning to try for ages is The Absolutely True Diary Of A Part-Time Indian. It’s told from the perspective of 14-year-old Junior, a budding cartoonist who has spent his life on the Spokane Indian Reservation but now attends an all-white high school. It’s been repeatedly challenged and banned for a variety of reasons: “alcohol, poverty, bullying, violence, sexuality, profanity and slurs related to homosexuality and mental disability”. All sounds good to me!

One of the most-often-recommended-to-me-books-on-my-to-read-list is Rebecca by Daphne du Maurier. I can’t quite explain why I haven’t got to it yet, except to say… I always mean to! It sounds deliciously Gothic and camp, with just the right drop of melodrama. An unnamed young woman fears she will always live in the shadow of her husband’s first wife, Rebecca, now dead but still beloved by the sinister housekeeper Mrs Danvers and the rest of the Manderley household staff. And once I’ve finally read it, I can watch the acclaimed adaptation released earlier this year!

Those Who Leave And Those Who Stay by Elena Ferrante

My sojourn through the Neapolitan novels will continue in 2021 with Those Who Leave And Those Who Stay, the third installment of Elena Ferrante’s brilliant quartet. If the first two (My Brilliant Friend, and The Story Of A New Name) are anything to go by, it’s going to be amazing. They’re all translated into English by the inimitable Ann Goldstein. The second book ended with Lena as a newly published author, and her long-time crush Nino in the audience at her first reading. I can’t wait to see what happens next for her!

Too Much Lip by Melissa Lucashenko

Alright, this one isn’t so much a to-be-read as a to-be-finished: I was lucky enough to study an extract of Too Much Lip by Melissa Lucashenko, and enjoyed it so thoroughly that I went out and bought the whole book to read in full. It’s a “dark comedy about ordinary people”, and it won the Miles Franklin award in 2019 for the “highest literary merit” and “presenting Australian life in any of its phases”. It’s rare that a book by an Indigenous Australian wins our country’s most prestigious literary prize, and even rarer still that a funny book wins it, so that alone is enough to make it a must-read!

Update: I got there! Read my full review of Too Much Lip here.