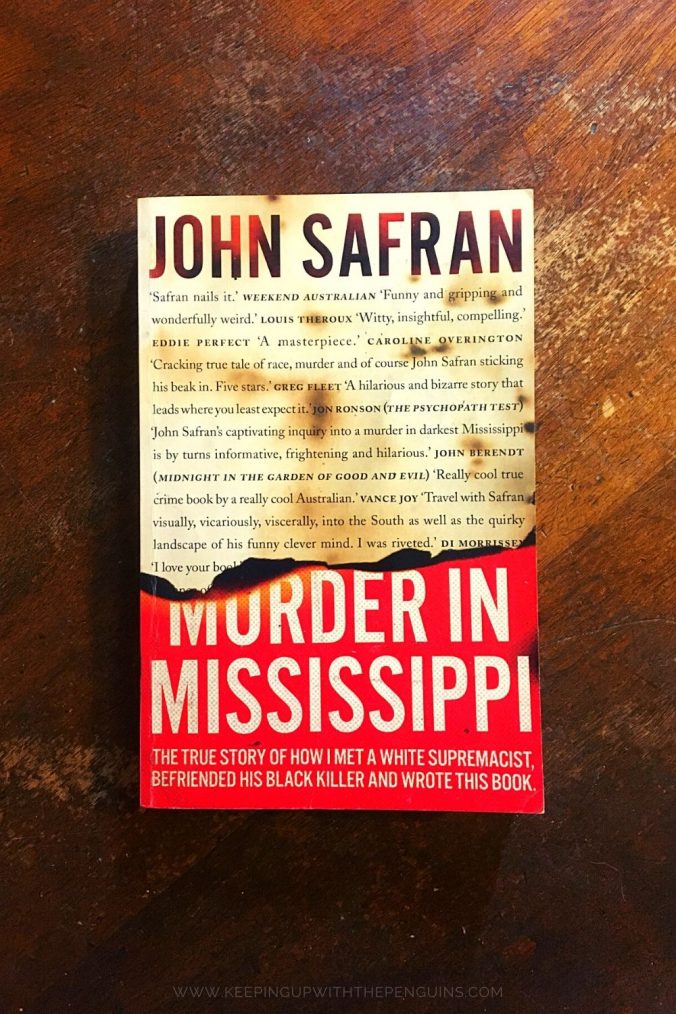 I’ve had a copy of Murder In Mississippi on my shelves since I first heard John Safran talking about the process of writing it on the now-defunct Sunday Night Safran radio program (and it’s actually the second book I’ve reviewed on that basis, the first was Religion For Atheists). It was published in 2013, and later in the U.S. under the title God’ll Cut You Down (the Johnny Cash lyric, quoted in the book’s epigraph). I remember Safran saying on his show that the title changed because Murder In Mississippi sounds very exotic in Australia, but to a U.S. audience it sounds like “Murder In New South Wales” (I checked with an American friend, and she confirmed).

The book’s subtitle is: “The true story of how I met a white supremacist, befriended his black killer and wrote this book”. So, even though it’s been gathering dust on my shelves for years, perhaps it’s a good thing I waited to read and review Murder In Mississippi – it’s only become more zeitgeist-y over time.

The author, John Safran, is a documentary filmmaker and humourist, kind of like an Australian Louis Theroux. He specialises in fish-out-of-water storytelling, and a “you can’t ask that!” style of interview. As he says himself, on page 2 of Murder In Mississippi: “I often ask dangerous people indelicate questions and try not to get thumped. And I often ask them about race. I’m a bit of a Race Trekkie – like a sci-fi Trekkie, but with race, not space.”

Murder In Mississippi starts when Safran – as a “bit” for a documentary – tried to join the Ku Klux Klan. Spoiler alert: they wouldn’t overlook his Jewishness, and declined his application. As part of that endeavour, he spent a day in Mississippi with notorious white supremacist Richard Barrett. Barrett didn’t take kindly to being the butt of one of Safran’s jokes, and made sufficient legal threats to stop the footage ever going to air. A year and a half later, Safran learned that Barrett had been killed (allegedly) by a young black man.

Safran was spooked, and intrigued. Drawing his inspiration from classic true crime books (In Cold Blood, Midnight In The Garden Of Good And Evil, and “a couple of less famous ones”), he decided he had to investigate and write the story. Doing so meant picking up sticks and plonking himself down in the American South with nothing more than a hunch and a penchant for asking nosy questions (seriously, Safran didn’t even have an advance or any publishing support when he decided to do this). That’s where the similarities between Safran and his predecessors end, however; he’s certainly a lot more frank with the reader about his trickery and creative license than Capote ever was. “All those true crime books were written before the internet,” Safran says on page 29. “These days, you can’t get away with anything.”

Safran embarks on his investigation with all the preconceptions you’d expect upon hearing that a white supremacist might have been murdered by a black man. He charged in with a bit of a white saviour mentality, to be honest. He thought he’d EXPOSE INJUSTICE and FIX RACISM… and, of course, nothing of the sort came to pass.

A brief overview of the crime at the center of Murder In Mississippi: on 22 April 2010, a neighbour called emergency services and reported seeing smoke rising from Barrett’s home. Firefighters found his corpse near the back door of the house, and an autopsy revealed thirty-five stab wounds, traumatic injuries to the head, and rib fractures.

The investigators pieced together a story and timeline that involved Vincent McGee – who was out on parole, after serving most of a sentence for assault and grand larceny – doing some yard work for Barrett in the afternoon, returning to the house that evening and stabbing Barrett, then returning again a third time to set fire to the property in an effort to conceal his crime. They proposed a number of motives for McGee’s alleged crime, mainly robbing Barrett (his wallet and gun were missing), and/or rejecting a sexual advance made by Barrett. Safran was the only one who started asking questions about race.

When Safran arrived in Mississippi, McGee was being held in remand pending trial. Safran was hoping to get the preliminary interviews out of the way and then get his court reporter on, figuring that the Truth Would Come Out as the prosecutor and defense did battle… only McGee entered a guilty plea, and was sentenced to 65 years in prison. That left Safran scratching his arse, wondering where the heck to go from there. It completely destroyed his preconceived narrative (because miscarriage-of-justice stories should really end with the wrongfully-imprisoned man going free, at least in a pre-Serial world).

Murder In Mississippi therefore became a book about the process of researching and writing a true crime book, far more than a book about the crime itself. Searching my feelings about half-way through, as I scanned the obligatory glossy photo inserts, I realised I cared about whether Safran actually got onto McGee’s prison visitor list to interview the man in person, far more than I cared whether McGee actually committed a crime and/or what actually happened at Barrett’s house that night. Safran’s investigation, his frustrations and his doubts are the focus of the story.

“In Mississippi, the more layers of onion I peel, the more I’m standing in a mess of onion.”

There was actually something quite comforting about reading a fellow Australian’s efforts to wade into American race relations. Neither Safran nor I can pretend to truly understand the divide between white and black in the American South; all we can do is ask nosy questions and make inferences from what we understand of racism in our own backyards. Still, he has the gall to ask far nosier questions than I ever would, which meant I learned a lot.

Safran won the 2014 Ned Kelly Award (True Crime) for his efforts, and enjoyed the process so much that he went on to write Depends What You Mean By Extremist (my review of that one to follow, soon, probably). All told, this was an interesting, compelling, and at-times hilarious read, one I highly recommend to true crime fans and Race Trekkies alike.

My favourite Amazon reviews of Murder In Mississippi:

No One Is Talking About This – Patricia Lockwood

10 Books About Violence Against Women