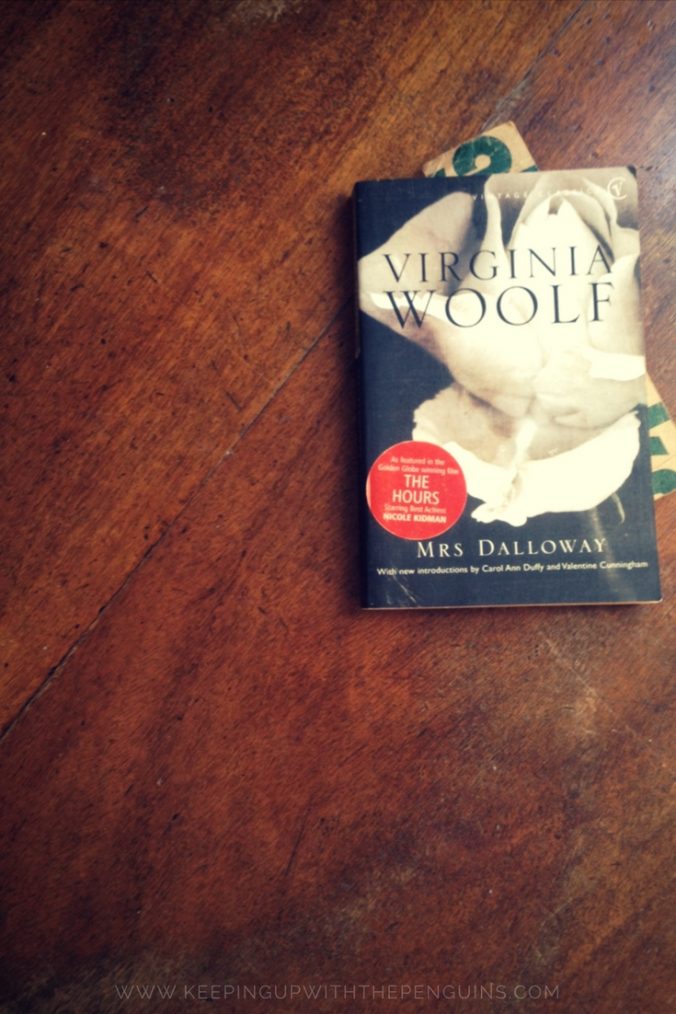 Ever-mindful of the gender imbalance on my reading list, I decided it was high time for a feminist writer to teach me some shit. My next selection was Mrs Dalloway by Virginia Woolf.

The first edition of Mrs Dalloway was published in 1925 by Hogarth Press… which was founded, owned and operated by Virginia Woolf and her husband. That’s one way to get published, I suppose!

Woolf was reportedly inspired by reading James Joyce’s Ulysses, though she wasn’t a fan of his notoriously unreadable tome. Writing Mrs Dalloway was really Woolf’s way of saying “Look, mate, here’s how you do it right!”. She mirrors the format of Ulysses, with both books taking place over the course of a single day, but in this case it’s a day in the life of Clarissa Dalloway, an aging Pommy socialite.

And holy smokes – “heavy” might not be the right word, but it sure was something. I felt like a ping-pong ball bouncing around the inside of Woolf’s skull. It’s a “stream of consciousness” suitable for white water rafting. Woolf has us saying hello to a childhood frien-NOPE, we’re admiring a tree-NO WAIT, we’re reminiscing about a past lov-HANG ON, we’re buying flowers… on and on it goes.

I had no idea what the fuck was happening, not for a single moment. I re-read every sentence three times, and still couldn’t follow it at all. What I did manage to absorb I can summarise here in the form of a few Mrs Dalloway Fast Facts:

There’s some peripheral guy she walks by in the park, Septimus. He’s shell shocked out the wazoo and it’s making his foreign wife miserable. He decides he loves life but hates doctors, so he throws himself out the window. Not a great end, all told. Septimus and Mrs D are the two primary characters, but they never actually meet – his suicide just features in the party gossip she hears later.

Yeah, it’s that kind of book – the kind that makes me feel extremely stupid. I couldn’t shake the feeling that I was Missing The Point the whole time I was reading it. The closest analogy I can come up with is that it’s like watching an episode of Seinfeld, but harder: you keep waiting for there to be a point or a plot, but none materialises. There’s no literal interpretation, it’s just layer upon layer of metaphor until you’re buried so deep you can’t breathe.

And the best part is: according to the critiques I read online afterwards, Mrs Dalloway is a “much more accessible” version of Ulysses. So that’s the story of how Ulysses got demoted to the very bottom of my to-be-read list 😉

If I had to say what I got out Mrs Dalloway, it would probably boil down to the following: everyone is bonkers. You shouldn’t get married out of obligation. London is pretty. Women are brave to write letters without the help of a man. Teenaged daughters are annoying. Young women who wear party dresses that stop above the ankle will get called slutty behind their backs. Hosting a party is hard, especially when your girl crush shows up unexpectedly and the talk of the night is the shell-shocked veteran who topped himself. So, I guess, do with all of that what you will…

I would recommend Mrs Dalloway, wholeheartedly, to anyone who is far, far smarter than me.

You can read my review of Michael Cunningham’s 1991 adaptation of Mrs Dalloway, called The Hours, here.