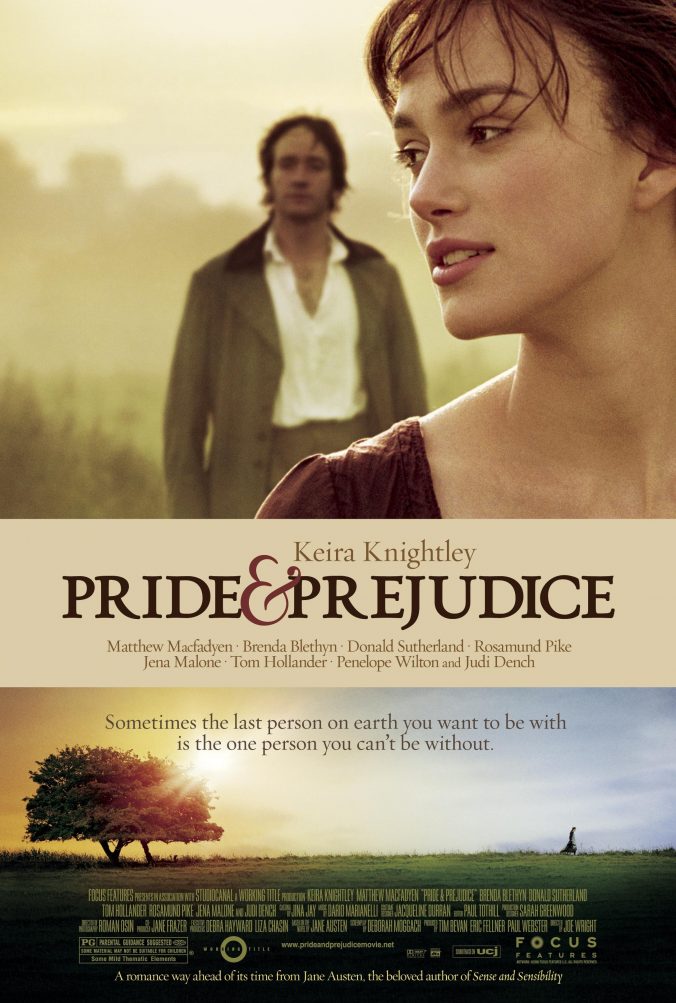 Welcome, one and all, to the first in a new blog series for Keeping Up With The Penguins! All month long, I’ll be reviewing movie adaptations alongside the classic and best-seller books that inspired them. This week, I reviewed Jane Austen’s Pride And Prejudice, and I was pretty spoiled for choice when it came to screen adaptations. It is, after all, one of the best-loved books in English literature, and we can’t help but translate it to the screen as often as possible. In the end, it was a toss-up between reviewing the classic BBC mini-series or the more recent movie version. I ended up going for Pride & Prejudice (2005), mostly out of laziness – a 129 minute film sucks up a lot less of your day than six hour-long episodes.

Pride & Prejudice stars Keira Knightley as Elizabeth Bennet, and Matthew Macfayden as the romantic lead Mr Darcy. I can see how Colin Firth would have made a better Darcy, but in my view Knightley was a practically-perfect Lizzie, exactly as I’d imagined her in the book. Plus, she was fresh off the back of the success of Bend It Like Beckham and Pirates Of The Caribbean. Director Joe Wright said that’s pretty much why he chose her; her star-power allowed him to cast a relative unknown as the male lead, and kept the marketing team happy. I can’t work out whether that’s a compliment or an insult to all involved…

And an important note at the outset: I know this is a historical film, but I refuse to nit-pick matters of period accuracy. Reviews that get stuck into “but the soldiers wouldn’t have had yellow embroidery on their jackets that year!” or “but that type of flower wasn’t introduced until 50 years later!” are boring as heck, and I won’t be one of them.

That said, as much as historical accuracy is off the table, story accuracy remains the centerpiece. When you’re adapting, as I said, one of the best-loved books in English literature, the stakes for remaining faithful to the original material while simultaneously making a great film for modern audiences get super-high. That happy duty fell to screenwriter Deborah Moggach (with a little help from her friend, the incredible Emma Thompson). At first, she tried to stay as faithful to Austen as possible, and she really put in the work, writing ten drafts over the course of two years. She focused in particular on trying to keep as much of the original dialogue as she could. When Wright came on board as director, he gently cajoled her into making a few small changes: adding a couple scenes from perspectives other than Lizzie’s, for instance, and tweaking the timeline. It was a pretty bold move on his part, given that he hadn’t actually read Pride And Prejudice before he saw one of the script’s early iterations…


Anyway, this version, Pride & Prejudice, is set in 1797, a bit earlier than most other adaptations (that usually place it in 1813, the year that the book was first published). From what I can tell, that decision was based almost purely on the fact that Wright hated nineteenth-century fashion. He also wanted this film to look a bit more earthy and rural, so there’s a lot of mud on hems and farm animals wandering about. Those factors combined helped Pride & Prejudice stand out among the slew of Austen adaptations in the ’90s and ’00s, which had presented much cleaner and more refined versions of the period drama.

I found that the movie skipped over a lot of the subtleties of the various political negotiations that took place in the marriage market, but perhaps to be expected in the medium of film. Wright had a lot less time to work with than the BBC adaptation, which was three times as long; he once said that Pride & Prejudice is “about Elizabeth and Darcy, following them, and anything that detracts or diverts you from that story is what you have to cut”. This means that the film really emphasises the romantic and comedic elements, and downplays Austen’s social commentary – whether that’s a good thing or a bad thing I suppose depends on which aspect of her work you like the best. They did have to take the time to do things like explain in the dialogue what an “entailed estate” means, because films don’t have footnotes, and that made me laugh.

I know Knightley is the star, with her sassy forthright iteration of Lizzie Bennet, but it was really the supporting cast that stole the show. Kelly Reilly abso-fucking-lutely nailed Miss Bingley! She’s snarky, she’s nasty, she’s snobby, all to great effect – even I found her intimidating, from the comfort of my own 21st century couch. And Tom Hollander as Mr Collins had me in hysterics! Again, his character was exaggerated – he was more awkward, more oblivious, more snivelling than he came across in writing – but he did it so bloody well. Hats off to both of them!


Actually, every character was exaggerated, almost a caricature of their book-selves. Lydia, in particular, seemed a lot more childish. I mean, in the book she was hardly a calculating femme fatale, but she was definitely a bit more worldly than Movie Lydia who got swept away in the illusion of a fairytale romance, giggling all the while. The irony is that Jena Malone, who played Lydia, was actually older than Knightley and most of the other Bennet sisters at the time of filming – movie magic strikes again! And, of course, I can’t neglect to mention Judi Dench’s stunning performance as the indomitable Lady Catherine de Bourgh; apparently, Wright convinced her to join the cast by writing her a letter that said “I love it when you play a bitch. Please come and be a bitch for me.” And she delivered!

On the whole, it was a very theatrical retelling of Austen’s best-known novel, but it stayed quite faithful to her story. They changed the “feel”, for lack of a better term, but not what actually happened in the narrative. For time and convenience, sure, they cut a few scenes and some minor characters, but none of the major plot points were altered. Quite a feat, as far as I’m concerned!

That’s not to say I didn’t have a few quibbles. My favourite line in the whole novel, where Darcy offers a distressed Lizzie a wine, didn’t end up in Pride & Prejudice, which I consider to be a huge oversight. And their first dance featured a bit of camera trickery whereby everyone else in the room literally disappeared, which I thought was a bit heavy-handed. Those minor cock-ups, however, pale in comparison to Lizzie’s horrible line in the big romantic climax, when she meets Darcy in the mist:

“Your hands are cold” she bleats, ugh! It’s an abomination, an insult to Austen, and no matter how good the rest of the movie was, all involved in bringing that line to life should be made to sit in the time-out corner and think about what they’ve done.

And thank goodness I saw the U.K. version, where the final scene shows Mr Bennet giving his consent to Lizzie and Darcy’s marriage. Apparently, the U.S. release added an extra “and they lived happily ever after” husband-and-wife-smoochy-smoochy shot after that, and I literally would have thrown up in my mouth. Such a shame to end an otherwise good film on bum notes…


But let’s not linger on such unpleasant matters! Pride & Prejudice was made on a (relative shoestring) budget of $28 million. It wound up raking in approximately $121 million total. Its success was hardly surprising, given the trend set by Romeo + Juliet and Shakespeare In Love, and other extremely popular Austen adaptations. There was a push for an Austen Revival at the time, and Pride & Prejudice rode that wave, trying to capture a younger audience; in fact, it was marketed as “brought to you by the produces of Bridget Jones’s Diary and Love Actually“, before Austen’s name was even mentioned.

The film was released in fifty-nine countries in 2005-06, and became the 41st highest-grossing film internationally that year. Its appeal went beyond the popular, too, and it earned four Academy Award nominations (including Best Actress for Knightley). Despite the fact that Austen adaptations will always ignite strong feelings regarding accuracy and faithfulness, this one was undoubtedly a success on all fronts.

So, which was better, the movie or the book?

Through gritted teeth, I’ll say the book. The movie was great, and I really enjoyed it, but really the best part of Austen for me is her political and social commentary, and that’s something the movie really skates over. If you enjoy Austen for the romance, this movie should be a winner for you!

But probably no one will ever enjoy it as much as the woman in Chile who, Netflix reported, watched the film 278 times over the course of a single year. That’s a true fan, right there…