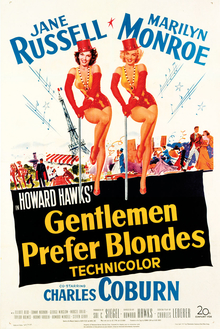 It took quite a few iterations for this film to reach our screens: Gentlemen Prefer Blondes, the 1953 musical comedy, was based on the 1949 stage musical of the same name, which was in turn based on the 1925 comic novel of the same name by Anita Loos. All the work was worth it, though; it was the ninth-highest grossing film that year, taking $5.3 million at the box office (on a budget of $2.3 million), and it stars, of course, the incomparable Marilyn Monroe in one of her most iconic roles.

One of my favourite things about films of this era is that they put the credits right at the beginning, before you’re tired and hungry for (more) snacks. It’s a good thing, in this case, because I needed laser-sharp focus to find Anita Loos’ name! She’s buried right at the bottom, beneath the other screen-writers, which seems a bit rough given that the entire story and its characters were her creation. And here’s another fun fact I picked up about how work was valued on this film: despite Monroe’s role as the titular Blonde that Gentlemen Prefer, she was only paid her usual contract salary of $500 per week, while her co-star Jane Russell, earned a whopping $200,000. It seems hard to believe now, but at the time Jane was actually the more experienced and well-known actress of the two.

Anyway, to the plot: there are some significant departures from Loos’ book, which shouldn’t be surprising given the telephone-game of adaptations it went through to get to the screen. In Gentlemen Prefer Blondes the movie, Lorelei Lee (Monroe) and Dorothy Shaw (Russell) are showgirls, rather than society girls, and the timeline has been shifted up a few decades so it’s no longer set in the Jazz Age. Lorelei is engaged to Gus Esmond, a dorky-looking fellow who falls all over himself to buy her things and treat her well. However, he’s simultaneously under the thumb of his wealthy father, who believes the fun-loving money-hungry Lorelei to be a bad influence (imagine!).

Dorothy isn’t attached, and she seeks a different kind of love to Lorelei. She’s drawn to men who are good-looking and fit, regardless of their prospects. About twenty minutes in, Lorelei declares in frustration (which had me in hysterics):

“You don’t want to end up in a loveless marriage, do you? If a girl spends her time worrying about money, she doesn’t have no time for love! I want you to find happiness, and stop having fun.”

Lorelei plans to marry Esmond in France, and they’ve got tickets to sail there together, but Papa Esmond intervenes. He forces his son to stay at home and plants a private investigator on the cruise liner, to keep an eye on her (more on that in a minute). Esmond sends Lorelei off with a blank cheque and tells her not to worry, he’ll meet her there, but also warns her to behave herself, lest any stories of her misadventures get back to his father.


The private dick is Ernie Malone, and he seems to take the place of DA Bartlett and Major Falcon from the book. The whole storyline of Lorelei’s former life of felonies and her role in military espionage is removed. Instead, Malone falls in love with Dorothy, and has to balance his desire to impress her with his obligation to tail Lorelei and catch her in a compromising position. Dorothy initially fobs him off, preferring the all-male Olympic athletics team on board (which seemed just a convenient excuse for an extremely camp scene of mostly-naked men in beige boxers dancing flamboyantly for her in a gym, heaven!), but eventually she comes to return Malone’s affections.

Naturally, Lorelei gets herself into trouble. She meets and charms the rich geriatric Sir Francis “Piggy” Beekman, owner of a diamond mine, much to the chagrin of his wife (who is also on board). When Lorelei and Piggy are alone in her cabin, he recounts his travels to Africa and demonstrates how a python squeezes a goat by hugging her close (wink-wink) – the perfect moment for Malone to snap a picture of them.

Dorothy spots Malone hustling away with his camera, and she and Lorelei concoct a scheme to get Malone drunk and steal the film from him. Lorelei lures him to her cabin, and they convince him to drink up with what is now my favourite rhyming toast of all time:

“There was an old fellow named Sidney

Who drank ’til he ruined a kidney

It shrivelled and shrank, but he drank and he drank

Of course, with encouragement like that, Malone writes himself off. (Oh, okay, fine, Lorelei spikes his drink and I find that a really gross and creepy addition to the story that I’d rather forget, so let’s not mention it again.) The girls find the incriminating film in his pants (not a euphemism) and Lorelei takes it straight to Piggy, bragging about her cleverness and discretion. He offers her a thank-you gift, and she asks for Lady Beekman’s diamond tiara. I actually like this version of that particular sub-plot better than the book; it’s sacrilegious, I know, but it’s a lot less convoluted than Lorelei convincing him to buy her one and Lady Beekman chasing her across the world to steal it.


When the ship arrives in France, Lorelei and Dorothy hit the shops hard. It’s all going swimmingly for them, until they’re abruptly ejected from their hotel and Esmond’s cheque bounces. It turns out that Malone had a recording device planted in the room, in case his Peeping Tom routine didn’t work out, and he’s shared his findings with Papa Esmond. Lorelei’s engagement has been unceremoniously called off. Esmond shows up to confront her about her indiscretion, and she shuts him down with her now-iconic performance of Diamonds Are A Girl’s Best Friend, making it abundantly clear to him that women are sensible to chase the security that money brings and forget about love.

While she’s thawing out Esmond’s cold dead heart through the power of song, Lady Beekman files charges against her for the theft of the tiara, and when Lorelei comes off stage she is arrested. Dorothy convinces Lorelei to just give the damn thing back, but when they go to retrieve it they find it’s missing from her jewellery box. The two of them concoct another hair-brained scheme, to have Malone track down Piggy while Dorothy disguises herself as Lorelei (complete with blonde wig and fake accent) to present at court. Sure enough, Malone reveals in court that Piggy had the tiara all along, Lorelei is exonerated, and the day is saved!

In the final scenes, Esmond has decided he’s ready to forgive and he and Lorelei go to leave the club together, but Papa Esmond shows up to make one last attempt at destroying their future happiness. He accuses Lorelei of being after her fiance’s money, at which she laughs and tells him not to be silly – she’s after his! Then she gives a rather impressive speech about how money is an asset for a man in the same way looks are an asset for a woman in this bullshit patriarchal society we’ve created. After all, she implores him, if Papa Esmond had a daughter, he’d want the best for her and that would mean marrying a man with a fortune – why should he begrudge Lorelei the same? He agrees, and the film ends with a joint wedding for Lorelei and Dorothy, marrying Esmond and Malone respectively. It’s a very sanitised ending compared to the book…


… but, really, the whole film is a rather sanitised version of Loos’ original creation. They’ve erased Lorelei’s diary completely from the plot, and thereby taken away a lot of her cleverness. She comes across as a simple gold-digger, practically two-dimensional, instead of the insightful, witty woman we came to know and love through her journal. The only upside is that Dorothy has a lot more agency in Gentlemen Prefer Blondes the movie. She’s a lot more decisive, and much more likeable and relatable as a result. Plus, she has dynamite outfits! In fact, all of the costumes are perfection. I can’t resist the visual appeal of a camp musical, I’m a sucker for it!

Monroe and Russell were both widely praised for their performances, even by critics who weren’t otherwise impressed by the movie version of Gentlemen Prefer Blondes, and I can see why. They’re both incredibly compelling, and they steal every scene. Monroe’s performance of Diamonds Are A Girl’s Best Friend is, as I said, iconic – I couldn’t look away! – which is how it came to inspire homages from performers like Beyonce, Madonna, and Kylie Minogue. That said, it shouldn’t overshadow the equally-brilliant performance by Russell, with her sharp wit and wry one-liners bringing a much-needed cleverness to an otherwise flimsy over-simplified story. The film doesn’t move as quickly as the book, much is lost in translation, but thanks to Monroe and Russell there are still many knowing nods and knee-slapping laughs to be had.

So, which was better, the movie or the book?

The book, definitely, but the movie was still great fun. Plus, with a run-time of 91 minutes, it’s the perfect lazy hungover Sunday film, one to watch when you don’t want your thinking meat to work too hard and you’re in the mood for some glitz and glamour.

The Turn of The Key – Ruth Ware