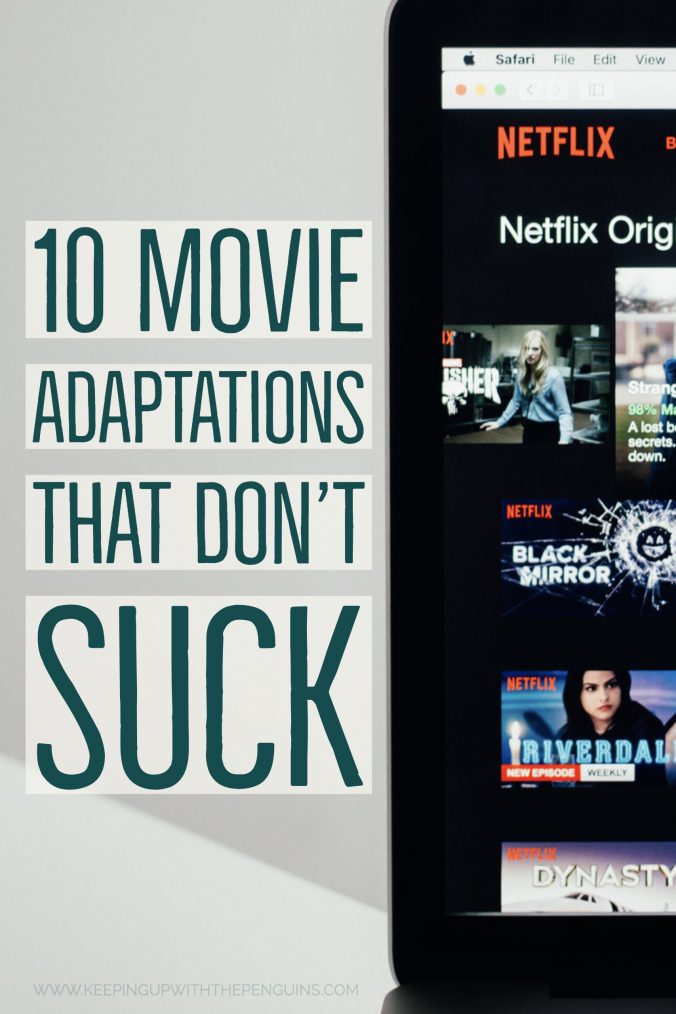 I confess: in addition to being perpetually behind in my reading, I almost never watch movies. Sure, I have a few tried-and-true favourites that I turn to on nights in alone, but for the most part I never get around to actually watching something new. I bring this up because I’m reading my way through a list of classic and popular books, and many of them have (unsurprisingly) been adapted for the big screen. Before I started Keeping Up With The Penguins, I could have counted the number I’d seen on one hand. This week, all that changes! I carved out a few precious hours and finally dug into my Netflix queue, just so I could bring you this: my (probably incomplete but still valid) list of movie adaptations that don’t suck.

I figured that the subject of this week’s review was as good a place to start as any. The Dressmaker by Rosalie Ham was published in 2000, a gothic novel set in a fictional Australian town of the 1950s. The film adaptation, starring Kate Winslet and Hugo Weaving, was released over a decade later, in 2015. I know it’s a cardinal sin for a book-lover to admit this, but I think that I liked the film better than the book. It was certainly more fun, more whimsical, and more comedic – all good things, as far as I’m concerned. They had to tweak some elements of the story for the translation to the big screen (the protagonist was struck down with a kind of trauma-induced amnesia, to allow for the “big reveal” of her dark secret about two thirds of the way through), but it was all done really smoothly. Plus, Winslet is absolutely fantastic, not to mention all the other Aussie acting royalty starring alongside her.

The story of Still Alice is every struggling writer’s dream: aspiring author Lisa Genova was struggling to get any interest in her heart-wrenching tale of a young woman’s descent into dementia, so she self-published in 2007. Still Alice sold so well that it got the attention of the major publishing houses, and eventually Hollywood. The film adaptation, starring the incomparable Julianne Moore, was released in 2014. I will make no secret of the fact that I am a Julianne Moore fangirl. In my eyes, that woman can do no wrong, and Still Alice was no exception. I was gripped, the whole way through. I mean, the book was fine and everything, but it probably didn’t tug on my heart strings the way that Genova intended – it took Moore’s incredible performance to pull the thing right out of my damn chest.

I meant it when I said I love Julianne Moore, and that’s probably why two of her films feature on this list. The Hours is not an “adaptation” of Virginia Woolf’s Mrs Dalloway of course, but it’s about as close as you can get given that the original text is a crazy stream-of-consciousness modernist ramble. Technically, it’s actually an adaptation of Michael Cunningham’s 1998 novel The Hours, which was itself an adaptation of Woolf’s work… adapt-ception!

The Hours features not only my homegirl Moore, but also Meryl Streep and Nicole Kidman. That’s one heck of a formidable trio! Kidman is almost unrecognisable (that fake nose!) in her role as Virginia Woolf, writing Mrs Dalloway in 1920s England. Moore plays a pregnant 1950s housewife, living in California and reading Woolf’s book as she struggles with the confinement of her domestic life. Streep plays a modern New York woman, planning a party of her friend with late-stage AIDS in 2001. The stories of these three women weave together across the film, and it is absolutely stunning. I give them all 10/10.

This is one of the very few film adaptations I had actually seen before I started the Keeping Up With The Penguins project. Little Women was a childhood favourite of mine; I loved Winona Ryder’s Jo, who dreamed of becoming a writer and refused to be waylaid by silly boys and their ridiculous offers of marriage. Louisa May Alcott’s 1868 novel has been adapted to film six times (and countless more times in television and other media). Of course, I’ve not seen any of the others, but how could they possibly top this one? Pre-shoplifting-scandal Ryder is joined by Susan Sarandon, a very young Claire Danes, and an even-younger Kirsten Dunst. When you’re watching it, you’ll probably have to work pretty hard to shut off the nagging intersectional-feminist voice in your head that points out all the problems, but once you do it will make for a truly enjoyable and touching film.

To be honest, what I love most about the 2014 film adaptation of Cheryl Strayed’s Wild is the story behind its creation. Reese Witherspoon optioned the rights to Wild before the book was even released. She had recently founded Pacific Standard, her own production company, with the goal of finding roles for women that were, y’know, actually good. Roles that were layered and complex and stretched further than the tropes to which she had been relegated for so long. So that, in itself, makes this a film – Pacific Standard’s first – worth watching.

As far as the movie itself is concerned, I really appreciated their refusal to blindly adhere to conventions of the film genre. The book did not present a neatly packaged story, there weren’t clearly delineated character arcs, it was chaotic in the way that intensely personal memoirs often are. All too often, books like Wild are re-packaged (see: bastardised) to fit this linear model of plot development that audiences have been trained to expect, but Wild bucked that trend. The filmmakers stayed true to the story of Strayed’s life, and her telling of it, which makes for a fascinating film-watching experience. I’m not sure the movie was “as good” as the book per se, but it certainly didn’t suck.

Up ’til now, I could totally hear all the proper film aficionados rolling their eyes at me, so here’s one with which they can’t possible argue: the 1962 adaptation of Harper Lee’s To Kill A Mockingbird. Gregory Peck was breathtaking in his role as Atticus Finch – so much so that he and Lee became lifelong friends. He won an Oscar for Best Actor, and the film won two additional awards (for Best Screenplay Adaptation and Best Art Direction). It totally has the chops!

The only – only! – flaw in this otherwise-perfect film, as far as I’m concerned, is how the writers limited the role of Calpurnia (the Finch’s nanny, cook, cleaner, and all-round Good People). She had a very strong presence in the book (which I reviewed here, by the way), she really influenced Scout’s development (moral and otherwise), and she played a pivotal role in the Finchs’ relationship with the black community in their small Southern town. Unfortunately, in the film, she was downgraded to a mostly “yes sir, no sir” kind of role, which was disappointing. Nonetheless, I really hope that they never try to re-boot this particular adaptation; despite that one criticism, I am certain the original version cannot be topped.

I’m throwing both of these films into the same category, because I like them for the same reason. The Fault in Our Stars and The Hunger Games both feature teenaged female protagonists, with overwhelming odds to overcome and a complicated love life. The fact is, I’m not sure either of the adaptations constitute “great films” in and of themselves, but they share the same main benefit. In fact, all film adaptations with teenage protagonists are better than the books (in my humble opinion), for the simple reason that I usually find the internal monologue of teenage narrators – with all their self-deprecation and worrying and overwhelming emotional investments in questionable relationships – pretty damn annoying. The translation from book to big screen completely alleviates that!

Even where these films use a voice over, it’s used (relatively) sparingly. This allows the plot and the actual action to come to the fore. The story is allowed to speak for itself, without all of the yucky let’s-get-the-reader-to-emotionally-relate-to-this-troubled-teenager guff. So, for that reason, I count both The Fault in Our Stars and The Hunger Games as movie adaptations that don’t suck. Plus, I’d much rather young women watch these than, say, Disney movies where the Prince always saves the Princess in the end. These ladies save themselves, which is a much better message!

This is probably the millionth adaptation of Nathaniel Hawthorne’s The Scarlet Letter. It came very much towards the end of the let’s-adapt-classic-literature-for-the-teen-market trend. Now, Easy A could never measure up to something like 10 Things I Hate About You (a classic of the genre, don’t even try to fight me on this), but Emma Stone is hella loveable, and the filmmakers did a less-clumsy job than many others in making the storyline of a classic novel accessible to a teenaged target market. Given that I didn’t exactly love The Scarlet Letter, it’s not hard to see why I preferred this version.

So, I watched the original adaptation of In Cold Blood (the one released just after the book, in 1967) – I must say, it wasn’t great, and I scrubbed it off the list for this post pretty quick. But then my husband suggested we watch Capote, the 2005 biopic about Truman Capote’s life during the period he was writing In Cold Blood and, I gotta say: it. was. fantastic! Once again, it’s not strictly an adaptation per se, but it was just so good that I had to include it here!

Phillip Seymour Hoffman does a truly awe-inspiring job in his role as Capote, it goes without saying (the man was a legend), but the bit that really impressed me was the role of Harper Lee’s character. Not a lot of people realise this, but Lee did a lot of work for Capote in the eight years that he spent preparing his manuscript; she was pretty much his research assistant, typist, witness liaison, editor, and emotional support person, all rolled into one. Unfortunately, most histories of Captoe’s life and work gloss over her contributions. This film gave her a much bigger role than I was expecting – granted, probably not quite as big a one as she played in real life, but still so much more than any of the others. If you have any curiosity about the story behind In Cold Blood, including Capote’s controversial friendship with the murderer Perry Smith, this is the film for you!

It would seem that the main ingredient for making a movie adaptation that doesn’t suck is securing a fantastic star – Kate Winslet, Julianne Moore, Meryl Streep, Gregory Peck, and Phillip Seymour Hoffman were all mind-blowing. Their masterful performances put these movies a cut above all of the other crappy adaptations that are spewed out every year. Have I missed one of your favourites? I’m keen to see more (I’m on a roll!), so let me know in the comments (or give it a plug over at KUWTP on Facebook!).