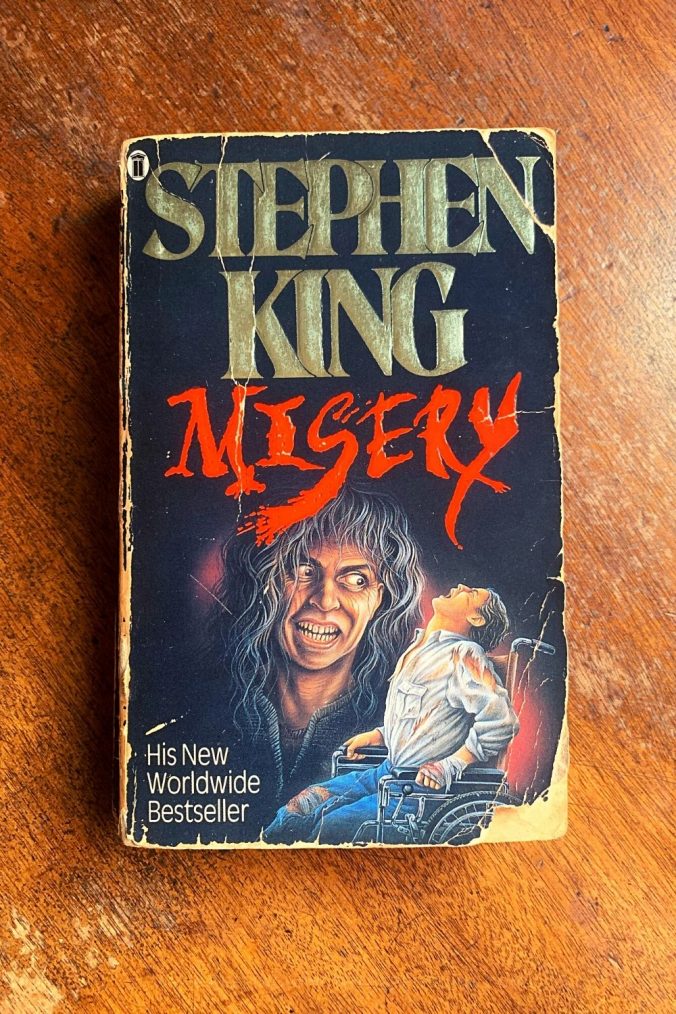 Can you imagine a writer so twisted that they write a best-selling book about a writer who is kidnapped, abused, and forced to write a novel by an axe-wielding villain? Such an idea could only come from the mind of the King of Horror, Stephen King! Misery is his 1987 psychological horror novel with that exact premise.

The main character, Paul Sheldon, is a 42-year-old author. He has recently published the final installment of his best-selling Victorian romance series, much to his relief; finally, he’ll be able to focus on his more Serious Literary(TM) novels. Unfortunately, Paul also likes a drink, a bit too much. He gets plastered to celebrate his success and winds up totalling his car. He’s pulled from the wreck by Annie Wilkes.

Ah, yes, Annie Wilkes – even if you’ve never read Misery or seen the movie adaptation, you’ve probably heard her name in hushed whispers as one of the most horrifying villains in fiction. She’s a former nurse with a healthy home-stash of medication “samples”, and she’s a big fan of Paul’s romance novels. She’s also very, very unhappy about his decision to kill off his protagonist in the final book.

So, here we have a severely-injured writer, “fortuitously” discovered by his number-one fan who’d do anything to have him continue writing. What’s a girl like Annie Wilkes to do… but take him hostage in her guest room, set his broken legs, get him hooked on painkillers, and plonk a typewriter down in front of him? That’s right, she forces him to write the story she feels Misery (the character for whom King’s novel gets its title) deserves.

When King first had the idea for the story of Misery, he envisaged a 30,000 word manuscript that he would call The Annie Wilkes Edition. In that parallel-universe version, Paul finishes the story Annie forces him to write, and Annie kills him, in order to bind that special, final book in his skin. Ultimately, though, he decided to go with a much longer version (four times as long) and a different ending (which I won’t spoil completely here, but…). When asked why the change, he said:

… it would have made a pretty good story (not such a good novel, however; no one likes to root for a guy over the course of three hundred pages only to discover that between chapters sixteen and seventeen the pig ate him), but that wasn’t the way things eventually went. Paul Sheldon turned out to be a good deal more resourceful than I initially thought.

Misery moves a lot faster than the other Stephen King novel I’ve read (Under The Dome), but that’s not surprising really, given that it’s a third of the length and only has two central characters. Unfortunately, despite having a narrower focus, King really doesn’t flesh out his characters as fully as you’d hope. Maybe I’m jaded from reading too many more recent and more intricate thrillers, but everything in Misery just seemed a bit two-dimensional. Annie Wilkes had no depth, no complexity – she was like a cut-out of a “psychopath”. Paul Sheldon was a mess of convenient realisations and insights; by way of example, he kept having dreams that would point him in the right direction or “reveal” how he truly felt. The “shocking twists” were just small bumps in the road, overcome by Paul thinking really hard about them for a bit. It’s paint-by-numbers intro-to-Psychology “show, don’t tell” stuff, and I honestly expected more from King.

Maybe he was blinded by how deeply personal and autobiographical Misery was for him. It’s not just the emphasis he puts on the importance of dreams (he has said, IRL, that the character of Annie Wilkes came from a dream of his own). King’s personal struggles, and the at-times destructive passion he feels for books and writing, feel encoded into Misery‘s DNA. Firstly, you can see the way King sees his books (and himself, come to that) hinted at in the way he describes his main character:

He was Paul Sheldon, who wrote novels of two kinds, good ones and best-sellers.

But the larger, overwhelming metaphor is that of addiction. Misery is like King’s come-to-Jesus moment about his own addiction(s) manifest. Paul Sheldon becomes addicted to the painkillers that Annie Wilkes forces him to take, and his days come to revolve around her dispensing his medication, more than food, water, or his bedpan; even when he contemplates escape, he wonders and worries about cutting off his supply. So, you’ve got a murderous captor holding the writer hostage, getting him high and forcing him to do things he doesn’t want to do, until he almost loses himself completely – honestly, if Misery isn’t handed out at AA meetings, it should be. To his credit, King doesn’t deny the connection.

I wrote [Misery] when I was having such a tough time with dope. I knew what I was writing about. There was never any question. Annie was my drug problem, and she was my number-one fan. God, she never wanted to leave.

He stops short, however, of admitting that Paul is some kind of cathartic Mary Sue; he concedes that “certain parts of him are [me]”, but qualifies that “I think you will find that, if you continue to write fiction, every character you create is partly you”.

(Maybe he spoke too soon. In a strange twist of life imitating art, King himself was in a serious car crash similar to his character Paul Sheldon’s, in 1999. Luckily, no one took him hostage and forced him to write anything afterwards… as far as we know.)

After publication, Misery won the inaugural Bram Stoker Award for Novel, and critical reception was generally positive, despite disgruntled voices from fans who resented King for steering away from his prior fiction’s supernatural/fantasy elements. Personally, I preferred the realism of Misery, but it still fell a bit short for me in other ways (see above). I might check out the movie adaptation at some point, just to see if the story translates better to the screen (though if they do any cheesy dream sequences, I may actually vomit). All told, Misery is a middle-of-the-road horror novel, made more interesting for its parallels to King’s personal life.

My favourite Amazon reviews of Misery: