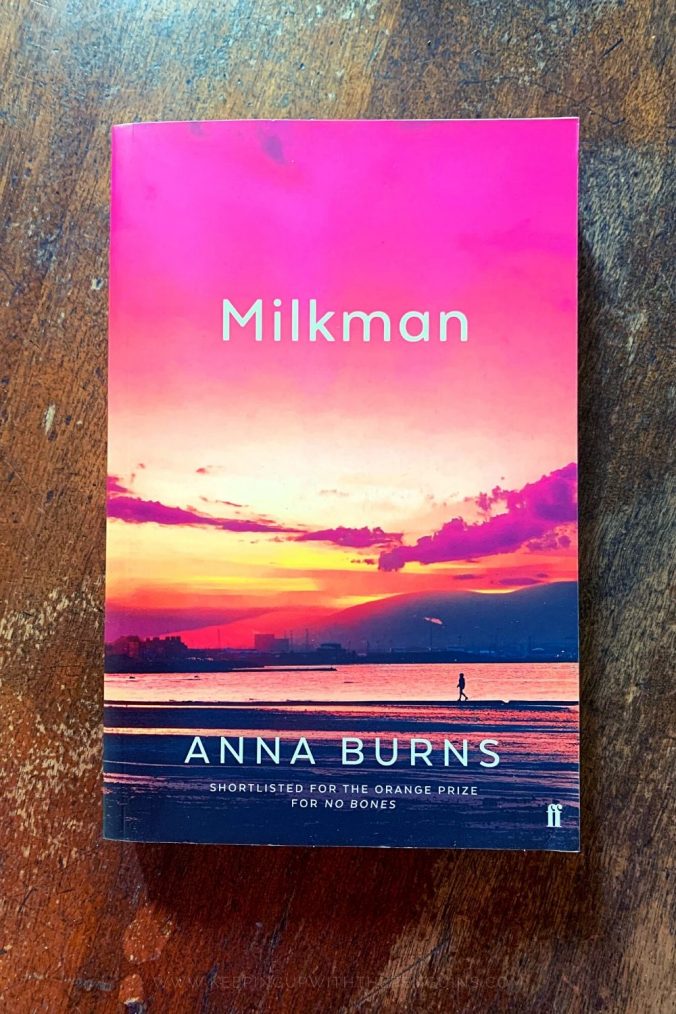 I was lucky enough to win a copy of Milkman in the 2018 Better Read Than Dead Booker Prize giveaway. This book was a big deal back then (which feels like a lifetime ago). It went on to win the Booker Prize (shortly after I won it in my BRTD stack), making Anna Burns the very first Northern Irish writer to get the gong.

As per the blurb: “In this unnamed city, to be interesting is to be dangerous… [Milkman is] a tale of gossip and hearsay, silence and deliberate deafness. It is the story of inaction with enormous consequences.”

The “nameless” city is quite clearly Belfast, Burns’s hometown. Milkman is loosely based on her experiences growing up in that neck of the woods during the Troubles. Burns herself has called the setting as “a distorted version of Belfast”, but also that it could work as “any sort of totalitarian, closed society existing in similarly oppressive conditions”.

Burns nails the opening line, too.

The day Somebody McSomebody put a gun to my breast and called me a cat and threatened to shoot me was the same day the milkman died.

It really sets the tone for this historical psychological novel. The narrator is an unnamed 18-year-old who is being stalked by an older man she calls “the milkman”. He also happens to be a paramilitary honcho. Despite her rebuffing his offers of “lifts” and “talks”, and her quasi-relationship with a more age-appropriate man she calls “maybe-boyfriend”, rumours start to spread around the insular community that she and the milkman are having a torrid affair. This sends the narrator’s mother off the deep-end, panicked that her daughter is practically an old maid and now her reputation is ruined.

It’s a hard plot to summarise, mostly because nothing and no-one is specifically named. Even the narrator only refers to herself as “middle sister” and “maybe girlfriend”. This is a heavy-handed but effective allusion to the culture of silence that surrounded the Troubles (see, once again, Seamus Heaney’s poem Whatever You Say, Say Nothing).

Also, much of the plot of Milkman is built around seemingly small events, things that might barely rate a mention if you and I were to discuss our day over a cocktail. Everything is heightened, everything is politicised, and everything is prone to being extrapolated upon by the community. A trip to the fish and chip shop becomes a harrowing experience with a major domino effect in the main character’s life, all because of a rumour that the proprietor heard about her love life.

(Important note: one not-small event that warrants a major trigger warning are particularly violent and horrifying animal deaths, about a hundred pages in. I had to skip my eyes down a couple of pages to get past it, it was making me queasy.)

Anyway, over the course of the novel, the milkman’s stalking escalates, to the point where he’s threatening to kill the narrator’s maybe-boyfriend if she doesn’t leave him. The narrator’s friend calls her out for her aberrant behaviour – like reading while walking, and running at the reservoir – which has apparently made her an easy target for this crazy stalker-slash-hardcore paramilitary. Oh, and she gets poisoned by a local kook. The poor lamb is having a rough month! Luckily, it all kinda-sorta works out by the end. Mostly.

If William Faulkner and Virginia Woolf had a love child who grew up in 1970s Belfast, they would write this book. Milkman won major praise – more than Woolf or Faulkner received for some of their works, even – with reviewers praising Burns’s voice and portrayal of the complex social politics of Northern Ireland at the height of the Troubles. The Booker Prize judges said:

From the opening page her words pull us into the daily violence of her world — threats of murder, people killed by state hit squads — while responding to the everyday realities of her life as a young woman, negotiating a way between the demands of family, friends and lovers in an unsettled time. The novel delineates brilliantly the power of gossip and social pressure in a tight-knit community, and shows how both rumour and political loyalties can be put in the service of a relentless campaign of individual sexual harassment… an exploration of the universal experience of societies in crisis.

I think it’s best to inhale Milkman – read as much of it in a single sitting as you can. I was reading it bit-by-bit at first, and not really getting into it; then, one night, I had the time to read two-thirds of it all in one go, and that’s when I started to really feel the flow. I’d also recommend reading it immediately after Patrick Radden Keefe’s Say Nothing, if you’re not particularly familiar with the Troubles. As a non-fiction and fiction pairing, they both explore the consequences of a culture of silence and complement each other superbly.

My favourite Amazon reviews of Milkman: