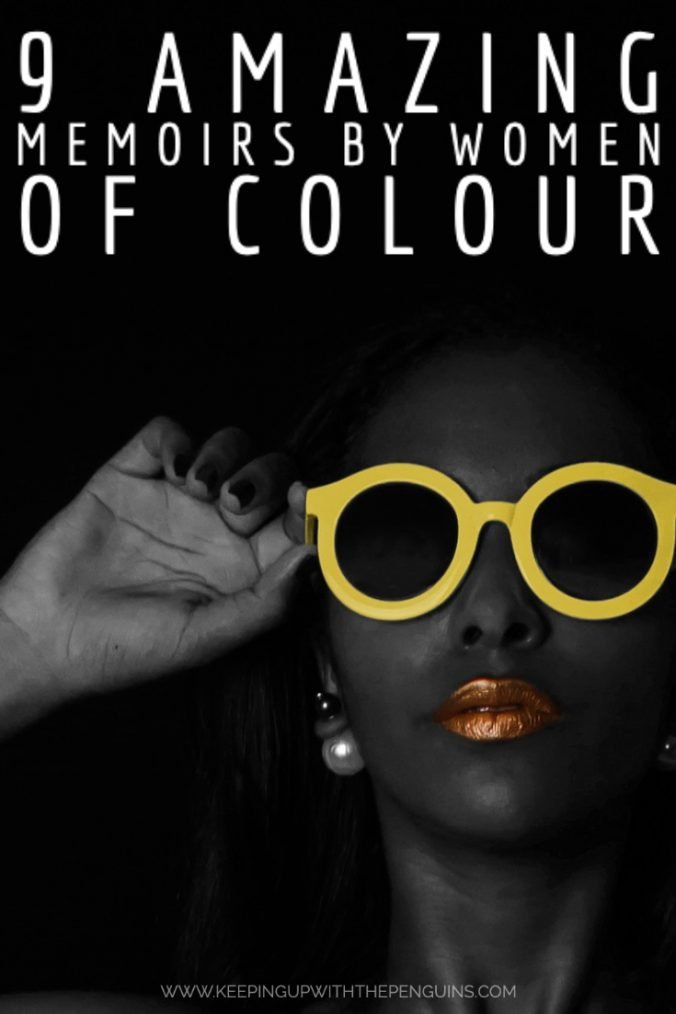 9 Amazing Memoirs by Women of Colour

Memoirs are particularly powerful books. Above and beyond the qualities of fiction, they literally put us in someone else’s shoes and invite us to see the world as they do. As a white woman, I could never claim to understand the experiences of women of colour, but through reading their memoirs I catch a glimpse of their lived realities. Each of us must commit to dismantling racism in our own way, and I aim to do my part through reading and sharing literature. Here are nine amazing memoirs by women of colour, should you wish to do the same…

I Know Why The Caged Bird Sings by Maya Angelou

I Know Why The Caged Bird Sings was first published back in 1969, and yet it remains as resonant and relevant as ever. Angelou’s tender, powerful, and poetic account of her childhood – growing up in the American South, with all the poverty and prejudice that implies, and surviving a terrible attack – set the bar high for memoirs by women of colour. Angelou followed this debut with a number of other memoirs, but it remains the most well-known and the most beloved. Read my full review of I Know Why The Caged Bird Sings here.

Allende is perhaps best known for her fiction, and her contributions to the strong tradition of magical realism, but her memoir, Paula, should always rate a mention. When her daughter (for whom the book is named) fell gravely ill, and laid comatose in hospital, Allende began feverishly writing everything she could remember of their lives together. This heart-wrenching memoir is full of family history, well-worn anecdotes of childhood, and the most intimate secrets.

Clarke grew up in a world very recognisable to all Australians: suburban streets, Vegemite sandwiches, the Ford Falcon for a family car, and sweltering summers. Her street was typical of all white middle-class streets in this country… except that the Clarkes are black. The Hate Race traces this “normal” childhood, with one glaring difference, from Clarke’s parents’ arrival in Australia through to her own coming-of-age. Reading it is like looking into a cracked mirror: you know what you should see when you look into it, but the picture comes back distorted. An essential read for all Australians who “don’t see colour”.

Gay describes her body as “wildly undisciplined”. In addition to being a woman of colour, she is also fat and queer. Her body exists at the intersection of all that we have been taught to fear in femininity. She reclaims the powerful narrative about her body in Hunger, a memoir about a devastating assault she experienced as a teen and the ways in which it sculpted her body in to what it is today. In her usual frank and forthright style, she examines the boundaries we draw around women’s bodies, the way trauma manifests, and the way our worlds are structured around what our bodies “should” be. Read my full review of Hunger here.

Uncomfortable conversations are sometimes necessary. That’s the message underlying Good Talk: a graphic novel memoir, told in conversations. What starts as a harmless question from a child about Michael Jackson’s skin colour turns into a much bigger conversation about what it means to move through the world with brown skin. Jacob’s conversations with her parents, friends, husband, and complete strangers reveal much about the way that race factors in to every day life. Read my full review of Good Talk here.

I will never, never, never tire of recommending this book. In The Dream House is like nothing you’ve ever read before. Drawing on tropes from dozens of literary traditions – the ghost story, the Choose Your Own Adventure novel, the self-help best-seller – Machado brings you in to the most intimate and terrifying situation many of us could imagine, that of being in love with an abusive partner. It’s not an easy read, but it is an essential one, and so beautifully crafted that it’s impossible to look away, even when your eyes are full of tears. Read my full review of In The Dream House here.

How does a lower-middle-class black girl from Chicago’s South Side come to hold the second-most influential position in America? That’s the story that Obama tells in Becoming. From her humble beginnings (as a child, she dreamed of having a whole house just for her family), to the peak of her husband’s presidency (The White House was so big that her childhood home could have fit in one of the thirty five bathrooms), this a story of lucky breaks, hard work, missteps, and determination. In a world where we have to see it to be it, Obama is putting herself center-stage in the hopes that other girls might feel they can join her. Read my full review of Becoming here.

North Korea is one of the most mysterious, unfathomable countries in the world – our only glimpses inside it, to see what it’s really like, come from memoirs like In Order To Live. With inimitable bravery, Park shares her family’s escape from the dictatorship, why and how they were able to slip away to China, and the terror of realising that her journey to safety wasn’t finished there. Millions of North Koreans continue to live under unimaginably difficult conditions, force fed propaganda by their government on the one hand and forcibly deprived of freedom on the other. Park is shining a light on this dark corner of the world, if we dare to look. Read my full review of In Order To Live here.

Most people only know or remember union for her roles in ’90s movies like Bring It On. Those are the people who most need to read We’re Going To Need More Wine. It’s a collection of personal essays about the nature of womanhood, race, sex, and violence, all with a view to inspiring us to become more empathetic and kind. As the title suggests, it’s the kind of conversation you’d expect to have with a friend over a bottle of wine: the world might be shit, but there’s got to be a way we can make it better. Read my full review of We’re Going To Need More Wine here.

His Only Wife – Peace Adzo Medie