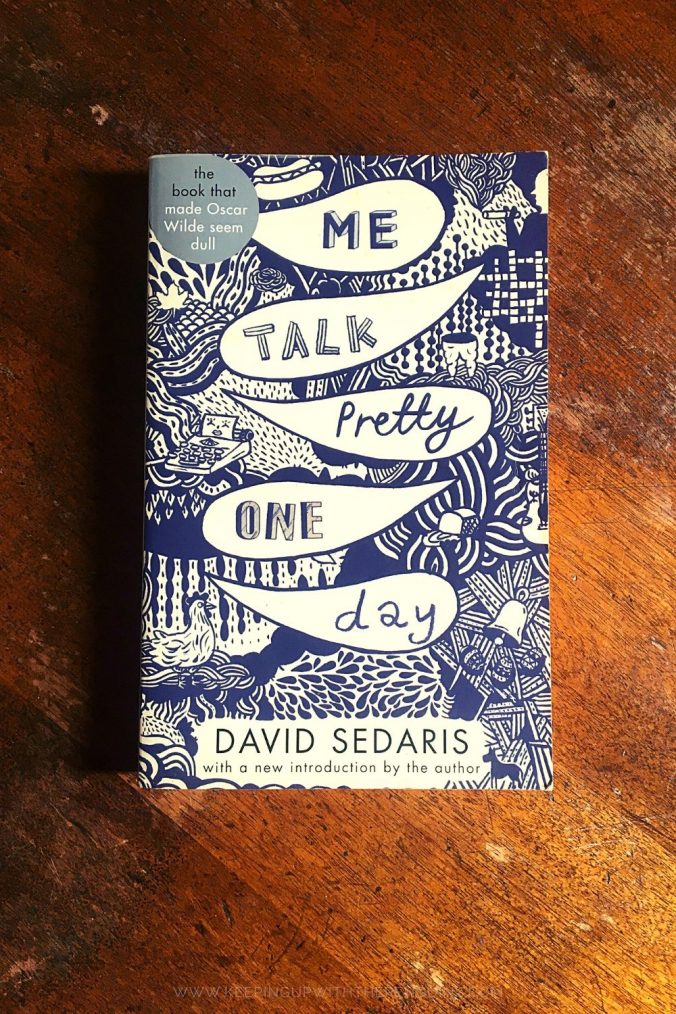 I know David Sedaris mostly by reputation. I’ve heard some of his segments on This American Life, and I loved his essay about his failed attempts at panic-buying at the onset of the pandemic, but I hadn’t read anything book-length until I picked up Me Talk Pretty One Day. This memoir, told in essays, was first published in 2000, making this year its twentieth anniversary, and yet it’s still as pertinent and resonant as ever. Sedaris’s wry humour and keen observations, of everything from family life to travel to cooking to education, are timeless.

My edition comes with a new introduction from the author, describing the various types of “fan” mail he has received since its initial release. Right from the outset, Sedaris sets his tone: uniquely sarcastic and affectionate in equal measure, poking fun without ever being cruel. I’m still scratching my head, trying to work out how he did it. How did he manage to land punches – in all directions, up and down and sideways – that feel like kisses? It’s truly masterful, a kind of comic genius you don’t see everyday.

Me Talk Pretty One Day is split into two parts. The first is a collection of essays about his childhood, mostly set in his native North Carolina. The second focuses on his life after moving to France, with his partner. It’s hard to believe how much life Sedaris has lived, as a speed addict, a furniture removalist, a writing teacher, a failed performance artist, an ex-pat… It’s all copy for Sedaris. He provides seemingly endless and delightfully witty commentary on all of his experiences, sharing the worst of them (addiction, grief, shame) with just as much good humour as the best of them.


Much of the humour in the second section is derived from Sedaris’s attempt to live in France without actually speaking French (and his fumbling efforts to learn). The titular essay – Me Talk Pretty One Day – is drawn from his participation in language classes, where just about everything is lost in translation. However, the title is also echoed in the very first essay, set in Sedaris’s childhood, about receiving speech therapy for his pronounced lisp. It’s a satisfyingly neat parallel. In fact, Sedaris’s communication “failures” are a recurring motif throughout the book.

Me Talk Pretty One Day is about astutely-observed adventures in seemingly mundane everyday activities. I’m sure Sedaris occasionally exaggerates and over-emphasises for comic effect, but I am more than willing to forgive him that. He seems like the kind of writer that could derive side-splitting laughter from a shopping list. That said, this isn’t a “fluffy” read. Sedaris is disarmingly honest about his extended flirtation with crystal meth (and his related dalliance with performance art), and other moments of darkness and weakness in his life. Still, he seems to process these traumas (self-inflicted and otherwise) in the way I most prefer and adore: with self-deprecating humour.


Me Talk Pretty One Day is a great read for when your attention span is shot. The essays are short enough that you can read the whole thing in bite-sized chunks, but the through-line is strong enough that it will keep pulling you back in. It’s a shame that it’s never been adapted for the screen. Apparently, it was all set to go – with a completed script and all – but Sedaris’s sister expressed concerns about how their family would be portrayed, and so he squashed it. For all his ribbing and warts-and-all honesty, Sedaris is clearly still a good guy, one who will set aside his own interests to protect his family and keep them happy.

So, I end where I began: still amazed at Sedaris’s knack for being cutting without being cruel, to tease but never bully. Every critical observation he offers is laced with love and LOLs. Every autobiographical gem he mines is polished to a bright shine. Me Talk Pretty One Day definitely lives up to the hype, and I guarantee it will tickle your funny bone, even in your darkest hours.


My favourite Amazon reviews of Me Talk Pretty One Day:

A Room Made Of Leaves – Kate Grenville