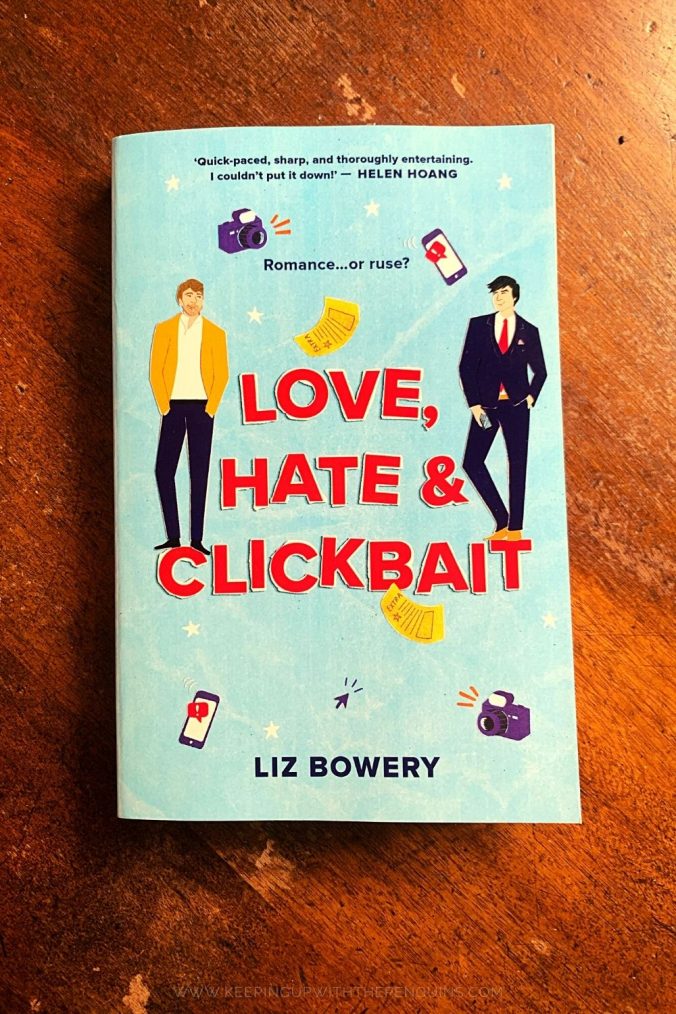 I’ve been on a bit of a political fiction kick lately. I rewatched The West Wing from start to finish, I read (and loved!) Red, White & Royal Blue, and I’ve been streaming 24/7 media coverage of the federal election here in Australia. So, you could say that Love, Hate & Clickbait came at just the right time! Thank you Harlequin HQ (Harper Collins Australia)!

This is an enemies-to-lovers romance set in the office of a California governor and future presidential candidate. Thom is a political consultant (and really, quite an arsehole, at least in the beginning): suave, manipulative, and calculating. Clay is a data analyst, and basically the complete opposite: awkward, lanky, and new to politicking. (He’s also very obviously inspired by Eduardo Saverin, the guy that Mark Zuckerberg screwed out of Facebook.)

A journalist’s photo of Thom and Clay – where they were arguing, but it looks like they’re about to smooch – goes viral, and their boss’s political campaign relies upon them playing along. Yes, folks, we’ve got a fake-dating trope blended into our enemies-to-lovers story – delicious!

Love, Hate & Clickbait is fairly formulaic most of the way through, but not everything played out the way that I’d expected. Not every plot point is resolved, and a few of the beats you’d expect it to hit are given a miss. It’s surprising, but not jarring. I particularly appreciated that Bowery left out any coming out anguish on Thom’s part – it’s 2022, we can have romances without shame about sexuality!

Pick up Love, Hate & Clickbait if you’re a politics nerd (like me!) with a penchant for steamy office romances and slightly ridiculous schemes.

A Tale For The Time Being – Ruth Ozeki