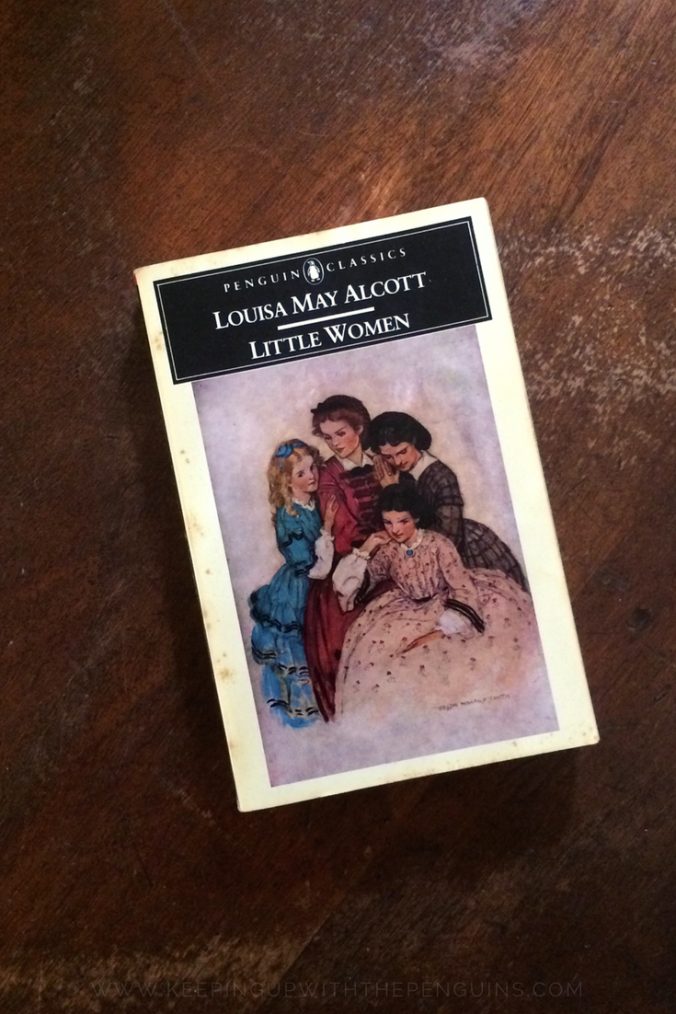 Listen up, folks, because I’m about to drop some knowledge: If you’re going to read Little Women for the very first time, you need to find an edition – like this one, from Penguin Classics – with a decent introduction to the text. I know not everyone reads the introduction first, but I do, and if I hadn’t in this case, I would have completely missed the point. I was already pretty familiar with the story, because I loved the Winona Ryder film adaptation as a kid, but as far as literary critique goes I would have been completely adrift without a better understanding of Louisa May Alcott’s background and her motivations behind writing Little Women. (Of course, if an edition with a decent introduction isn’t forthcoming, you could always just read this review before you get started…)

Little Women was first published in 1868, and has historically been dismissed as moralising, sentimental guff. It’s “for girls”, you know? It’s only recently that Alcott’s magnum opus has been considered a valued component of the American literary canon. To fully appreciate the genius of this book, you really need to understand Alcott’s politics and the context in which the book was published. And, in addition to finding a copy with an introduction that breaks it down for you, I would strongly recommend finding a copy of the original text; there was a later edition, published in 1880, that smoothed out a lot of the sharp edges and, in so doing, refined a lot of the language and character descriptions to make them seem more “genteel”. Virtually all readers nowadays pick up the 1880 edition without realising what they’re missing out on – don’t be one of them!

So, onto all this background knowledge I keep telling you that you need: Alcott wrote Little Women at the request of her publisher, who wanted a “moral” book for young girls, with “wide appeal”. The story she came up with follows the lives of the four March sisters – Meg, Jo, Beth, and Amy – as they transition into womanhood. Alcott herself was the second of four daughters, and – believe it or not – the similarities between her and Jo March don’t end there, so it’s pretty clear where she drew her inspiration. In fact, the story was so autobiographical that fans would write letters addressed to “Miss March”, and Alcott – being the good sport she was – would respond without correcting them. The first book was such a huge commercial success that readers (and Alcott’s publishers) immediately began clamouring for a sequel, so Alcott pumped out the follow-up “Good Wives” (though, it must be said, she was not a fan of that title, it was chosen by the publishers and she had no say at all). The two volumes are now sold together as a single edition, bearing the name Little Women.

Now, even though she seems like a good little woman herself, giving the publishers exactly what they wanted, Alcott is on record as having said that she would have much preferred to keep working on her own collection of short stories, which was very different in nature to the book for which she is most famous. So, why didn’t she? Well… she was hard up for cash. She wrote Little Women “in record time, for money” she said, but she hated writing it and referred to the process as “plodding away”.


She sought to address three major themes – domesticity, work, and true love – through this story of a family living in genteel poverty during the American Civil War. Alcott also effectively created the archetype of the “all-American girl”, embodying its different aspects in each of the March sisters: there’s Meg the beauty, Jo the career woman, Beth the dutiful wallflower, and Amy the romantic. The publishers wanted a story about good girls being good, but Alcott’s true message underlying the story is a little different: she’s clearly saying that virtue should be valued over wealth, and that women can overcome the constraints upon their gender through hard work and piety.

Yep, that’s right: Alcott was a feminist, and Little Women – despite its prima facie old-school values, and its controversial ending – is a deeply feminist novel. At the time of its publication, there were almost no models of non-traditional womanhood in popular media for young girls. So, Alcott took it upon herself to pitch many ideas of social change and progressive politics against the familiar backdrop of domestic life. Little Women paints a very familiar picture of the lives of girls in 19th century America, but it also legitimises their aspirations to grow beyond what is “expected” of them. So, three cheers for Alcott – way the fuck ahead of her time!

She gave the March sisters adventurous plots and storylines that had traditionally been coded as male. She wanted to normalise the ambition of women, and showcase alternatives to existing gender roles (which, at the time, were more restrictive than a damn corset). In particular, she addressed the idea that spinsters were “fringe” members of society, without power or influence. If you look closely, you’ll see that the spinsters and unmarried women are actually strong, multi-dimensional characters, the true power brokers of the New England world that she created. Alcott shat all over the idea that you needed a husband and a family to be a “good” woman, and she did so from a great fucking height.


Now, everyone who’s read the book is currently screaming at me: “But Alcott ‘saved’ Jo in the end by marrying her off! That’s not feminist!”. To that, I say that the way in which Alcott did it was so clever and subversive, I don’t blame you for missing it on the first take. Alcott did, indeed, “marry off” her heroine… but not to the dashing, Prince Charming (Laurie), who had begged for her hand time and time again. Nope! Jo instead marries the much older (and poorer!) Professor Friederich Bhaer, a far less romantic ending and one that subverted the expectations of all the young readers who had, until then, never read a love story that didn’t involve a fairytale ending. Fuck yes, Alcott – fuck yes! People who criticise this ending don’t seem to understand the precarious position in which the author found herself. She was straddling the demands of her moneybags publishers – not to mention her very pious and conservative father – as well as her own determination to write a story that upheld her own feminist values. You can’t put a 20th century feminist head on a 19th century working woman’s shoulders, and I say she did a damn good job with what she had.

“For some feminist critics, Alcott’s lifelong effort to tailor her turbulent imagination to suit the moralism of her father, the commercialism of her publishers, and the puritanism of “gray Concord”, kept her from fulfilling her literary promise. For others, Little Women itself stands as one of the best studies we have of the literary daughter’s dilemma: the tension between female obligation and artistic freedom.”

The book is full of sneaky little feminist asides. Of course, there are plenty of characters that represent the social status-quo, in keeping with the morals of the time, but the fact that Alcott managed to include her own agenda at all feels rebellious and awesome. In real life, Alcott was an active participant in the women’s suffrage movement (yay!), and also the temperance movement (boo!), so she practiced what she preached, no matter what her Daddy said. If you need any more proof that she was fighting the good fight, the wonderful introduction to my Penguin Classics edition cites her influence on some of the founding mothers of feminism as we know it today: Simone de Beauvoir, Gertrude Stein, Joyce Carol Oates, and others.


So, all told, I’m really glad I read the introduction and learned all of this before I started reading the book – otherwise, I could well have fallen into the trap of disregarding Little Women as fluff. As it was, I knew exactly what to look for in the story, and I found it really interesting and enjoyable. Little Women is basically the original YA novel – sure, it can be a bit saccharine and trite at times, but no more so than any other work published around the same time, and when you look closely there are some really valuable lessons hidden away there.

That said, even though I’m calling this a recommended read(!), I wouldn’t recommend it to teenagers. It’s much better suited to older readers, who have more developed critical thinking skills and can truly appreciate the masterful way that this simple story, about a very loving tight-knit group of sisters, makes some very important points about the role of women in society… points that we could do well to re-visit often.

Tl;dr? Make sure you look beneath the surface of Little Women, because that’s where you’ll find Alcott’s fighting feminist spirit. Onwards, ladies!

Note: in the end, I enjoyed Little Women so much that I put it on my shortlist of Classic Books Worth Reading here.

How To Read More

How To Read More Outside Your Comfort Zone