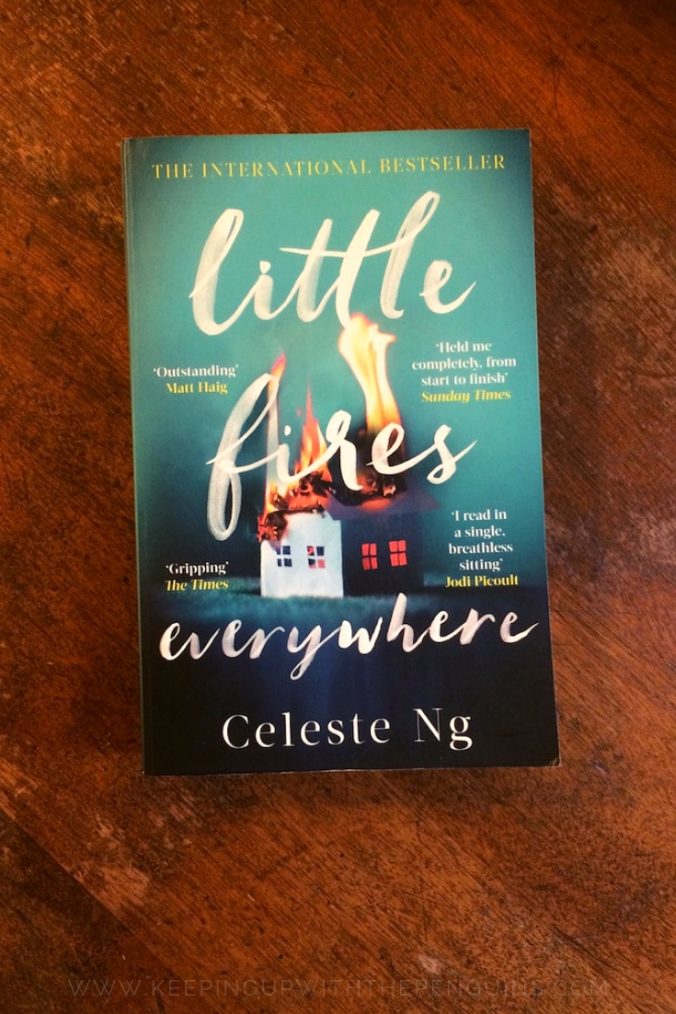 Little Fires Everywhere is Celeste Ng’s second novel, the one that catapulted her to book club stardom. It was famously endorsed by Reese Witherspoon, who said: “It’s a deep psychological mystery about the power of motherhood, the intensity of teenage love, and the danger of perfection,”. It also made her cry, so. There’s that.

The story starts in 1998, in the “placid, progressive suburb” of Shaker Heights, Ohio (where, it turns out, Ng herself grew up). Elena Richardson, and three of her four children, gather in the driveway and watch their house burn down. This was no wayward candle or cigarette accident, the firefighters tell them; several small fires, using an accelerant, were lit on each of their beds. This seems to be the natural climax of some very inflamed tensions.

Ng then takes the reader back to 1997, when Elena Richardson rented out her investment property to Mia Warren, an artist and a single mother to teenager Pearl. Previously, they’d lived all over the States, picking up and leaving town at the drop of a hat when the muses moved Mia to do so. But it seems they’re ready to settle now, in Shaker Heights, and quickly enmesh themselves in the lives of the Richardson family.

Pearl becomes particularly close – and quick! – to the second-youngest Richardson kid, Moody. They share a love of teenage angst and Manic Pixie adventures. The eldest Richardson kid, Lexie, also takes Pearl under her wing, showing her how to wear cool clothes and eyeshadow and stuff. Trip, the middle Richardson brother, is Pearl’s forbidden fruit; she knows Moody has a crush on her, but the jockish hunk of teen-man-meat that is his older brother Trip proves too tasty to resist. Izzy, the youngest Richardson, just tramps in and out being mad at the world; she and Pearl don’t really spend much time together, but she is drawn to Mia, the artist who actually takes her seriously (a powerful spell to cast on a teen girl with a lot of misdirected rage).

The adults – Elena and Mia – watch their kids become close with some concern. Elena thinks she’s Mother Theresa for offering Mia a job as the Richardson’s housekeeper, for “pocket money” while she’s doing her little art projects. Mia accepts, if only to keep an eye on Pearl and the Richardson kids, making sure they’re not getting up to too much trouble (which, of course, they do). As a debate sparks in the community about whether an adopted Chinese-American infant should be returned to her birth mother, Mia’s disregard for “the rules” becomes a sore point between them all, and Elena’s charity reaches its limits.

Ng manages to weave together multiple perspectives and time periods throughout Little Fires Everywhere, but she does so very naturally. There are no abrupt jumps backwards or forwards; in fact, you’ll barely notice it happening, unless you pause to take stock of what you’ve just read.

Everyone in this story has their own secrets and motivations, but not in a schlocky way. This is closer to An American Marriage than it is to Big Little Lies (both of which I’ve seen floated as comparison titles, the former more accurately, in my opinion).

In case it’s not clear, I’ll spell it out: I. LOVED. THIS. BOOK. Little Fires Everywhere is masterfully written. It’s an issue novel, but one that doesn’t beat you over the head with a foregone moral position. It’s a psychological thriller, without the hack writing or “plot twists” you can sniff out a mile off. It’s a family drama with a family that actually feels like a family, lots of little dramas unfolding in each of their lives. Little Fires Everywhere is one of those rare much-hyped novels that actually lives up.

I haven’t seen the mini-series adaptation (produced by, and starring, the book’s biggest advocate, Reese Witherspoon), but I once I finished the book I watched the trailer on YouTube. It seems to make the story a lot FLASHIER, a lot more DRAMATIC, with lots of shouting and violins. I hope they were just hamming it up for the trailer cut, because that would seem to betray the subtlety that makes this book genius.

Ng has definitely won a fan in me – immediately after I finished Little Fires Everywhere, I added her debut – Everything I Never Told You – to my wishlist, and I’ll eagerly await anything else she writes from now on.

American, Books Made Into Movies

7 Book Characters Who Are Only Children