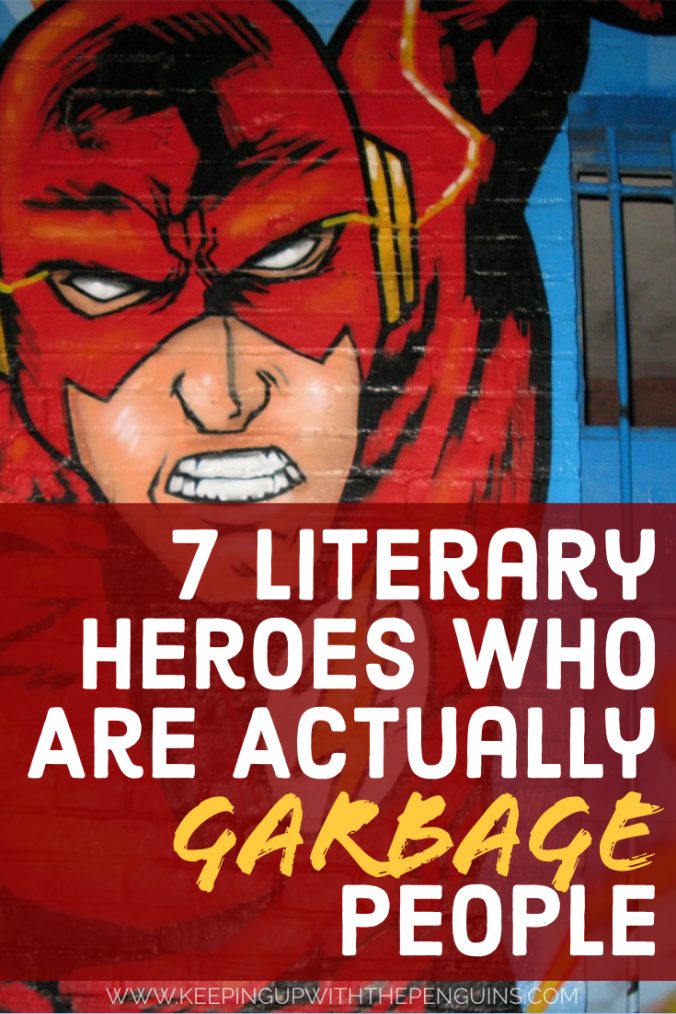 Have you every really thought hard about some of our literary heroes? When you look closely at their behaviour, they’re often not the loveable salt-of-the-earth types we like to think they are. I’ve written before about unlikeable narrators, but I don’t think that being “unlikeable” necessarily makes you a garbage person, nor does being a garbage person ipso facto make you “unlikeable”. In fact, some of the ones I include on this list are downright endearing and charming. I’m very aware that this post might be controversial as fuck, because our literary heroes are beloved by readers and coded well by authors to hide their true colours – but when has that ever stopped me? Let’s take off the rose-coloured glasses, people! Here are seven literary “heroes” who are actually garbage people.

Toad (The Wind In The Willows – Kenneth Grahame)

Toad is a jovial kind of guy, great fun to have at a party, but damn! In the real world, he’d be Elon Musk. He loves his friends, and they do the best they can to help him, but it’s all to no avail: he’s too stubborn and arrogant to listen to them. There’s also the little matter of Toad’s grand theft auto. By the end of The Wind In The Willows, he’s an escaped felon, and he cons his friends to harbour him – a fugitive! – making them criminals as well. Worst of all, he never faces any consequences for his actions. Garbage behaviour all-round from this lovable rogue…

Tom’s only an adolescent in Mark Twain’s adventure stories, but he’s well on his way to becoming a career criminal – possibly even a charismatic cult leader. He’s so caught up in his youthful folly, inspired by the adventure stories he’s read himself, that he can’t see past the end of his nose in the real world. Huck Finn would’ve done just fine rescuing Jim, the runaway slave, if Tom hadn’t tripped him up every step of the way trying to make things “proper”. Plus, he’s a fuckboy of the first order.

Look, even I (of the cold dead heart) get sucked in to the love story of Jane Eyre, so I don’t begrudge anyone getting a little twinkle in their eye when they read about the “dark, strong, and stern” Mr Rochester. But we have to face facts, Keeper-Upperers: he literally locked his goddamn wife in the motherfucking attic. I don’t care that he was “tricked” into marrying her; he needs to take some stinkin’ responsibility. Not to mention he negged Jane at every opportunity and basically only made himself emotionally available to her when his life fell apart and he needed her to put it back together. Boo!

Speaking of the Brontës: Heathcliff is the quintessential literary hero who was actually a garbage person. I know he had a rough trot being orphaned and everything, but heck! So did Cinderella, and she made herself useful, cleaning the house and caring for animals and stuff, instead of getting all butt-hurt about the girl next door marrying someone else and ruining everyone’s lives in revenge. Look at the plot of Wuthering Heights: the whole thing is basically Heathcliff’s fault! He’s an abusive a-hole, he screwed up his family for generations, and – not satisfied with that! – he continues to freak people out after he shuffles off the mortal coil, joining Cathy in a moor-haunting creepy ghost double-act.

Fine, this one is kind of a gimme: Thackeray literally called Vanity Fair “the novel without a hero”, but they were all just so garbage I couldn’t help but include them. George Osbourne, for starters, was so up-himself he couldn’t touch his toes, and he had to be talked into marrying Amelia after her family went bankrupt. He went through with the wedding, because “honour” (what a guy!), but just kept shagging her friends on the side until he got himself killed at war. Next up, there was William Dobbin, who sulked for years about Amelia’s shitty taste in men, and ultimately harangued her into marrying him too. Throughout it all, Amelia just wouldn’t. stop. whining. and she did very little to take control of her own destiny, or even just make her own choices. Plus, her kid was a right pain, and she thought the sun shined out his wazoo. Blegh!


Arthur Dent (The Hitchhiker’s Guide To The Galaxy – Douglas Adams)

I know that the Brits are super-proud of their stiff upper lip thing, but Arthur Dent takes it to the next level. The Hitchhiker’s Guide To The Galaxy begins with the actual destruction of the entire Planet Earth, but Dent doesn’t shed a single tear. He doesn’t grieve for the loss of the entire human race, not one bit. How self-centered do you have to be that you don’t find a minute to mourn the passing of an entire population? He just goes on belly-aching, with nary a thought for those poor perished souls. Smh.

If you only read the first couple parts of Gulliver’s Travels, while he’s gallivanting around Lilliput, you’d think he was alright. A bit slow on the uptake, maybe, given that he keeps taking all these voyages that end in disaster, but not an actual garbage person. That is, until, you reach the end: you’ll realise what a twat the man actually was. He abandons his wife and family time and time again for these ridiculous “adventures” (that always end with someone trying to kill him, and a botched escape). When he finally comes home for good, he decides he finds Mrs Gulliver “disgusting” and treats her like absolute shit for the rest of their lives. Garbage person!


And an honourable mention has to go to Harry Potter: there were so many wonderful characters in that book, and yet the main character was an angsty, arrogant emo-kid who was told repeatedly throughout his entire adolescence that the whole world revolved around him, so (of course) he believed it. Can you think of any others? Don’t hold back, Keeper-Upperers! Tell me about them in the comments (or vent over at KUWTP on Facebook!).