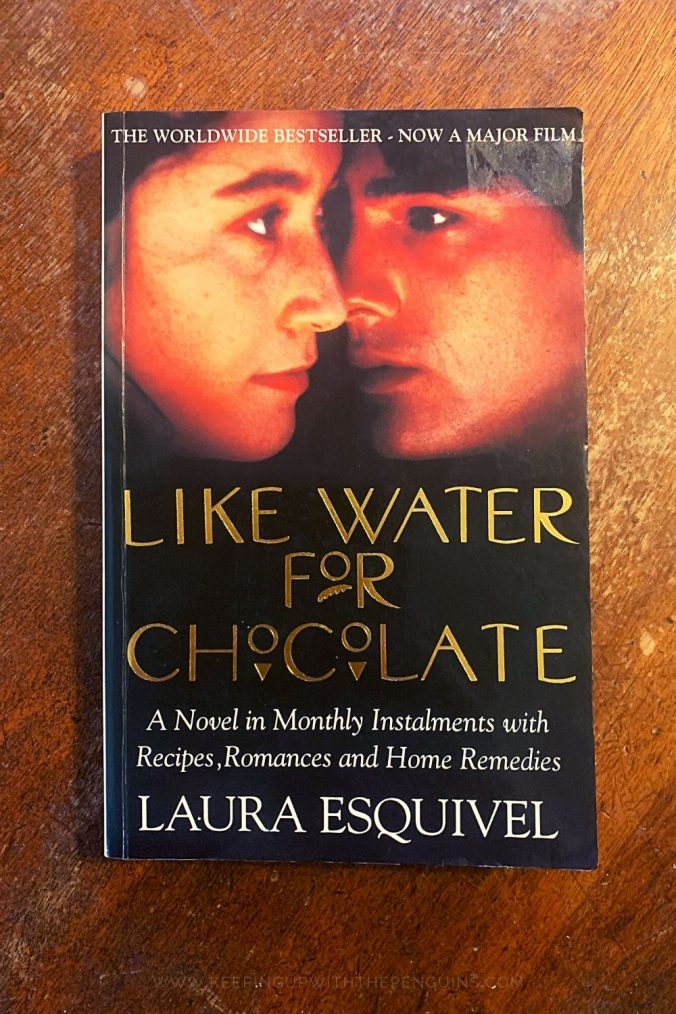 Let’s kick this off with a fun fact, shall we? Like Water For Chocolate, the 1989 novel by Laura Esquivel, takes its name from the Spanish phrase como agua para chocolate, which is an expression to say that one’s emotions are on the verge of boiling over. It’s a neat nod to the book’s contents, the story of a woman named Tita whose overwhelming emotions are often cooked into the delicious food she serves to her family. This edition was translated into English by Carol Christensen and Thomas Christensen.

The front cover of Like Water For Chocolate promises “a novel in monthly instalments with recipes, romances and home remedies” – and that’s exactly what you get. Even though the timeline of the story is far longer than a year, it’s divided into twelve months, each preceded by a recipe that the characters cook in the following chapter. Hot tip: make sure you’re not hungry when you pick this one up, because the recipes and cooking chat will have you drooling!

The story is a bizarre history of sorts, of the De La Garzas: Mama Elena (husband deceased), her daughters (Gertrudis, Rosarua, and Tita), the cook (Nacha), and the maid (Chencha), all narrated by Tita’s grand-niece sometime in an unspecified future. They live on a ranch in Mexico, near the U.S. border. The family legend is bolstered in the South American style of magical realism, where tears can turn into rivers and bitterness alone can kill.

It begins in January with a recipe for Christmas Rolls (not one of the more delicious offerings: sardines, chorizo, and chiles serranos? Ho, ho, no!). They are youngest daughter Tita’s favourite dish. Tita is the star of Like Water For Chocolate, though her supporting cast is also stellar. As the youngest, she is forbidden – by long-standing family tradition – from marrying, so that she can stay home and care for her mother for the rest of her life. Tita’s fine with this, until she meets the hunk-a-spunk Pedro. It’s love at first sight, for both of them, but Mama Elena isn’t having a bar of it.

When Pedro comes to ask for Tita’s hand, Mama Elena suggests that he marry Rosarua instead. Pedro reluctantly agrees, reasoning that at least marrying into the family will allow him to stay close to his true love, Tita, for life. Yeah, yeah, that’s a little problematic, but let’s not let it ruin the romance, eh?

The only thing Tita loves as much as she loves Pedro is cooking. Unfortunately, her dishes are infused with her emotions, sometimes with disastrous consequences. The lust of her rose petal sauce (made from the roses Pedro gave her) causes her sister Gertrudis to run away naked and work in a brothel. Tita’s desperate longing baked into Rosarua’s wedding cake causes everyone who attends the wedding to become violently ill (and delays consummation, ahem!). This supernatural effect is woven into the narrative very naturally, so that it almost feels like a given.

Despite the looming specters of death and heart-break, Like Water For Chocolate reads like a well-written rom-com. It’s certainly a lot more fun than, say, One Hundred Years Of Solitude – I’d say it’s closer to the love-child of My Brilliant Friend and The Alchemist, with a sprinkle of romance and magic. It’s easy to read, but it’s not without substance. The recipes are a neat hook, but that’s not all there is to love about this short, bittersweet family saga.

Like Water For Chocolate has sold over a million copies in Spain and Hispanic America, and a whole bunch more in translation around the world. It was also made into an award-winning film of the same name (no, I won’t bother watching it, the book was delightful enough and I’m worried they’d ruin it). I can certainly understand its enduring popularity, and I’d recommend it to anyone who wants to wade into the pool of South American literature, rather than diving all the way into the deep end.

My favourite Amazon reviews of Like Water For Chocolate:

Books In Translation, Books Made Into Movies, Romance

The First Time I Thought I Was Dying – Sarah Walker

What Is Magical Realism?