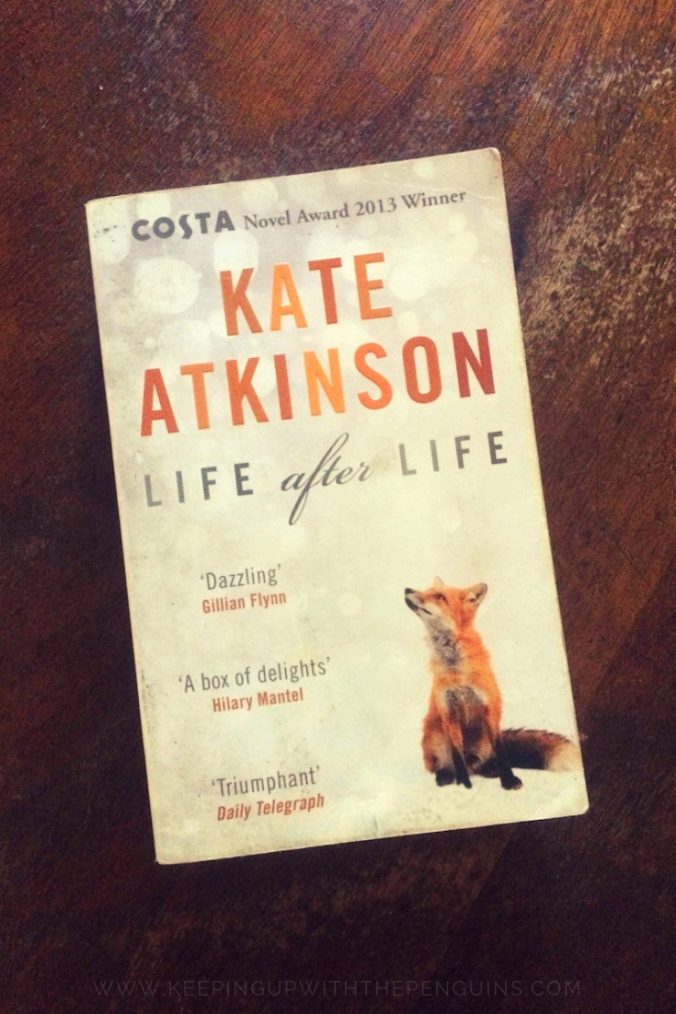 How often do you read a book where the main character dies 17 times? I’d wager not often, especially if you rule out any sci-fi or fantasy elements. Here, we have no time machines, no medical miracles, and no religious resurrections. Life After Life tells the life stories of Ursula Todd, a girl born on 11 February 1910. It takes the reader through all the twists and turns that her life could have taken, and shows how differently things could have turned out. Cool, eh?

Now, I was a little disappointed to realise that I had, unintentionally, picked up another fictionalised WWII narrative (how many can there BE on my reading list?). I’ll tell you up-front that I probably would have enjoyed Life After Life and its unique structure more if it had been placed against a different backdrop; I’m starting to get a bit weary with WWII re-tellings. That said, it was still a very interesting read, and it gave me plenty to sink my teeth into. I think the premise is best summed up by the blurb:

“During a snowstorm in England in 1910, a baby is born and dies before she can take her first breath. During a snowstorm in England in 1910, the same baby is born and lives to tell the tale. What if there were second chances? And third chances? In fact an infinite number of changes to live your life? Would you eventually be able to save the world from its own inevitable destiny? And would you even want to?”

So, in Ursula’s first “life”, she is strangled by her umbilical cord. Next, she survives her birth into a middle-class Buckinghamshire family, but later dies, drowning at sea. Then, she lives a little longer, only to fall to her death from the roof, where she was trying to retrieve a toy.

I’m going to state the bleeding obvious (even though it took an embarrassingly long time for it to dawn on me as I was reading): a 600-page story about a girl who gets to live her life over and over again until she gets it right… well, it gets a bit repetitive. More than a bit, actually: before I was a quarter of the way through, I’d lost track of the Ursula Death Toll. She’d died at least three times from influenza alone. The sequence repeats itself again and again, but Ursula seems mostly unaware (unlike the reader, who is painfully aware). She just gets an odd sense of foreboding now and then, when she approaches a point where she died in a previous life. It’s like playing a video game again and again, but completely forgetting the experience of having played it before; your subconscious tells you “hang on, there might be a bad guy behind that bush”, and you get a little further each time without really knowing it.

Atkinson doesn’t really address the reader’s logical questions about this repetitive cycle, except to hint at it through Usurla’s therapist. In one of her lives, as a child, she pushed her housekeeper down the stairs. This caused her mother to (quite rightly) question her sanity, and send her to a shrink. The good doc weaves in and out of the stories and lives, always spouting wise shit about reincarnation but stopping just short of giving any real answers.


Ursula’s first crack at her adult life, having finally survived her whole childhood, is pretty miserable: she is traumatised by a rape that she experienced in her teens (resulting in an unwanted pregnancy and an illegal abortion), and she finds herself trapped in an oppressive marriage. Her husband kills her when she tries to escape. In her next life, she ends up on a different path by aggressively defending herself and fending off her rapist in the first instance, which I found really gross. It seemed to imply that rape survivors can be “saved” from their trauma if they just try hard enough. Sorry, Atkinson, but you lose points from that.

A somewhat random storyline pops up a few times, in different lives, where Ursula’s neighbour (a young girl called Nancy) is raped and murdered by a child molester. On a couple of occasions, Ursula uses her foreboding former-life Spidey Sense to prevent it from happening, but the threat is never really explored or explained. I’m guessing Atkinson describes it further in the sequel (A God In Ruins, published two years later and focusing on the story of Ursula’s brother). I wasn’t a huge fan of that, either; it seemed like a bit of a ploy to get readers to buy the next book.

Anyway, later iterations of Ursula’s life see her experience WWII from multiple perspectives, mostly the Blitz in London but also once from Hitler’s compound in Germany. Sometimes she’s a blast victim, sometimes she works for the War Office, sometimes she volunteers as a rescuer, sometimes she has a baby with a Nazi. This is where I do give Atkinson credit: it’s certainly not a one-sided book, and Ursula’s fear of the Allied bombings and her love for her daughter is just as emotive when she’s on the “other” side. And I should mention here, I also loved Atkinson’s use of language. She had a real knack for brilliant similes, my favourite being the corpse that was picked up by his arms and legs only to “split apart like a Christmas cracker”.


I kept hoping/waiting for a big “twist” that never really came. I’m not sure if that’s my fault as a reader (I love plot twists that knock me on my arse, like this one!), or whether Atkinson kept setting things up that never quite came to fruition. I thought Ursula’s long-lost cousin (born to her aunt and adopted in Germany) would turn out to be Hitler. Or perhaps Ursula’s father was actually the murderous child molester. There seemed to be a lot of those types of loose ends that could have been turned into something really interesting, but alas. If you’re a fan of the shock-twist-ending, this isn’t the book for you – none of that shit happens, I’m afraid.

Towards the end of Life After Life, Ursula’s Spidey Sense has grown much stronger, and she starts to recall more definite details from previous lives. She uses this knowledge to try and prevent WWII by (of course) killing Hitler. The whole book builds up to this moment, and yet we never actually find out what happens! Ursula shoots Hitler, but his posse retaliates quickly, and she dies almost immediately after firing the gun. Every time Ursula dies, Atkinson tells us “darkness falls” (ahem*CLICHE*ahem), and the reader’s experience of the timeline stops with her death. So, maybe killing Hitler worked, maybe it didn’t – only Atkinson knows.


So, on the whole, Life After Life is murky. It’s full of plot-lines that aren’t completely resolved, and kind of appear and disappear at Atkinson’s will. The philosophical questions raised by Ursula’s endless Sliding Doors moments aren’t really answered. We don’t even know why or how her life happens over and over again. It’s not fantasy, it’s not science-fiction… it’s a really hard one to classify. I guess I’d say it straddles historical and speculative fiction, right in the middle of the Venn diagram between them. I think Life After Life is a good one for book clubs, because it will undoubtedly spark a lot of debate. It’s hard not to start thinking about your own life in a butterfly-effect-y kind of way (“maybe it’s a good thing I’m running 20 minutes late because in another punctual life I’d get hit by a bus!”, and that kind of thing). Still, there was enough in this book that didn’t sit right with me, and I won’t be seeking out the sequel.

My favourite Amazon reviews of Life After Life:

Quick Reads For Busy People: 11 Books You Can Read Fast

The Best Mothers In Literature