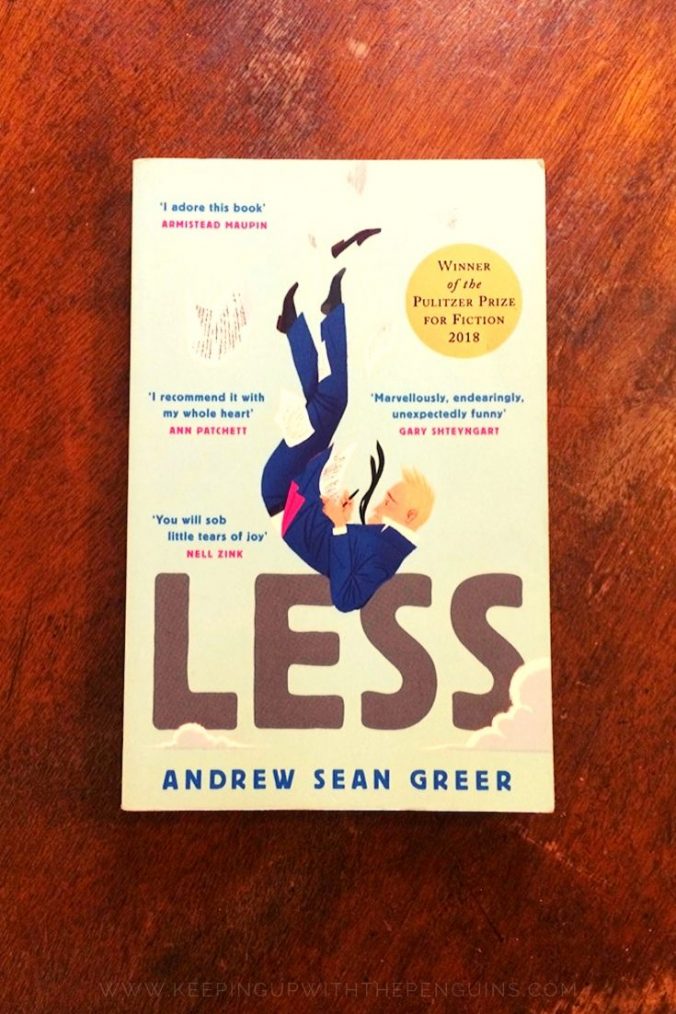 On my journey out of the post-Ulysses haze, I found myself unsurprisingly in the mood for some “light” reading. Big Little Lies was a page turner, don’t get me wrong, but there weren’t a whole lot of laughs to be had amidst all the rape, abuse, and manslaughter. Browsing my shelves, I happened upon a little light blue spine: Less, by Andrew Sean Greer. It piqued my interest, as I knew it to be a unicorn: an #ownvoices comedy that had won the Pulitzer Prize in 2018.

You might wonder how I knew it was a comedy, #ownvoices or otherwise, and to answer that I’ll give you a short excerpt from an event I attended at the Sydney Writer’s Festival that year, Andrew Sean Greer in conversation with local legend David Marr:

Marr: “Look, I don’t know how familiar you are with Australian English. Do you know the meaning of the word ‘fuckwit’?”

Marr: “Yes, fuckwit. Because the hero of your book is, it appears, for a good deal of the book, a complete fuckwit.”

And with that, I was formally introduced to the protagonist, Arthur Less – the one that David Marr described as a fuckwit, in tones of great affection (as Australians are wont to do). On that basis alone, I was inclined to give Less a go. I also noticed that one of the highly complimentary blurbs on my edition came from none other than my girl, Karen Joy Fowler. That settled it: I had to read this book.

Arthur Less worries that he is the “first homosexual to ever grow old” (which made me laugh… until I thought about the heavier connotations, “old” gays being the only ones who survived the AIDS crisis, not so funny). He finds himself suddenly single, when his long-time fuck-buddy dumps him to marry a far more eligible (and age appropriate) bachelor. Arthur Less decides that he must act. He can’t RSVP “no” to the nuptials and admit defeat, but he couldn’t possibly attend either, especially with his own 50th birthday looming… so, he proceeds to accept every half-baked invitation he’s received to literary events around the world, and sends his ex his regrets, citing “unfortunate” prior engagements.

And there we have it: this fuckwit is relatable as all hell. Planning a round-the-world trip on the spur of the moment to avoid an awkward social encounter? Big mood!


This premise gives Greer the opportunity to absolutely tear shreds off the literary world through satire. He never misses an opportunity to lampoon the self-reverential ridiculousness of it all. Arthur Less is “an author too old to be fresh and too young to be rediscovered, one who never sits next to anyone on a plane who has heard of his books”. His first stop is New York, where he chairs an event for a wildly successful and seriously overrated sci-fi writer (Less suspects he was the only author desperate enough to do the gig for free). Then, he joins a panel at a festival in Mexico, only to learn that all the preeminent guests are dead. In Italy, a generous translation of his debut novel wins an award, judged by a committee of high school students. On and on it goes…

The episodic structure also allows Greer to parade a series of colourful characters through Arthur Less’s voyage of self-discovery, BUT – I hasten to add – this isn’t your standard white-guy-sees-the-world-and-comes-home-transformed narrative. Greer is very careful not to fetishise the “exotic locals”. Arthur Less, the fuckwit, is always the butt of the joke. And his “self-discovery” seems almost accidental. He didn’t set out with any intention of transformation, he just wanted to avoid his ex’s wedding, and his personal growth is just a side-effect of his bumbling adventures.

My favourite part: Arthur Less accepts a visiting professor post at a university in Germany. He teaches a class called “Read Like A Vampire, Write Like Frankenstein”. It becomes immediately clear to the reader and everyone else that Arthur Less’s insistence that he is “fluent” in German is a complete delusion. Hilarious!


The narration feels very personal, a conversational third-person perspective, or so we think. In a Vanity Fair-esque twist, we learn towards the end that the story is being told by… shall we say, a friend of Arthur Less (for once, I won’t give spoilers – I don’t want to ruin the fun!). I think that’s the key, that’s what makes Less work. Arthur Less is so lovelorn, so self-pitying, such a sad sack, that Less would not have worked if told from his own point of view. It would have been morose and miserable and flat-out annoying. As it stands, though, Less is a very literary comedy. Even when the humour is slapstick, Greer manages to write it in a clever and challenging way. This is a book that could work equally well as a beach read and a citation in your thesis.

That was the whole idea, of course. Greer said that he began writing Less as a “very serious” novel, but he soon figured out that the only way to write about the miseries of an ageing, gay writer (as an ageing, gay writer) was to make it funny. This is a realisation that Arthur Less has himself in the book, too. I really dig this determinedly self-deprecating approach. It lets Greer parody all the priviliged-white-American-abroad tropes, to my great delight.

In addition to winning the Pulitzer Prize for Fiction in 2018, Less also spent an unbelievably long time on the New York Times Best Seller List, and even won the 2019 Australian Book Industry Award for International Book Of The Year. All of this is to say that Less is both a critical and a popular success. Greer has certainly won a fan in me! I highly recommend this book, particularly to fans of The One-Hundred-Year Old Man Who Climbed Out The Window And Disappeared, or anyone in need of a chuckle and a little heart-warming.


My favourite Amazon reviews of Less:

Worst Of The Keeping Up With The Penguins Reading List