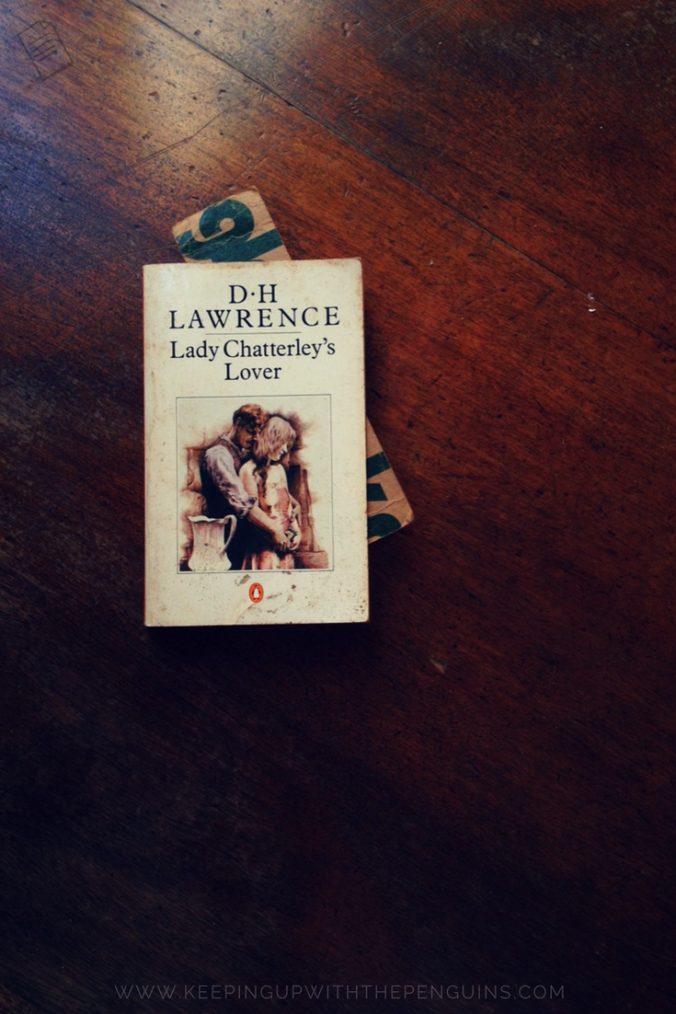 With six books done in this reading project, I tell you what: I was ready to read some proper smut. I was fed up with Victorian censorship, and grisly murders, and age-appropriate young adult writing. Hell with it all, I wanted some dirty bits! So when I passed by the bargain bin of my favourite second-hand book store and saw a copy of Lady Chatterley’s Lover, marked down to just $5… well, that’s just fate, isn’t it?

Lady Chatterley’s Lover was originally published in Italy in 1928, but the full text wasn’t available in other parts of the world until much later. In 1960, Penguin was actually prosecuted under the Obscene Publications Act for trying to publish the unexpurgated version… to no avail. A publisher’s note dedicates the book to the jurors that declared them not guilty. In fact, their victory in that case established a precedent that allowed for a far greater degree of freedom in publishing explicit content. So, three cheers for Penguin! Without them, we might have no smut to read at all… 😉

Richard Hoggart gets it right in the first sentence of his introduction to this edition: “Lady Chatterley’s Lover is not a dirty book.”

I didn’t lose all hope straight away, because he insisted that “dirty minds look for dirt”, so I was sure I’d be able to find some somewhere. After all, the premise is so promising: Lady C is trapped in a sexless marriage (Sir Hubby was been paralysed by a war wound, and we’re all just meant to accept that there’s no way a person with a disability could have sex, okay?), so she goes about finding other ways to keep herself entertained. Lawrence does his part to set the stage, skipping over all of their early lives together so the reader comes straight into (what you would assume is going to be) the action.

In fact, it’s Sir Hubby – fancying himself quite the progressive intellectual – who suggests Lady C find herself a shag or two on the side, and get herself knocked up. He wants a kid around to take care of all the trees he’s planted once he’s dead, which is as good a reason to procreate as any, I suppose? Lady C is keen on the idea, because this marriage is the worst: they’re both dead inside and basically indifferent to one another.

Off she trots, and I rub my hands together in glee: bring on the smut!

Only I get to about a third of the way through Lady Chatterley’s Lover, and it’s all still really hum-drum. Lady C’s life sucks. She mopes a lot about how much her life sucks. She finds a lover and fucks him, twice, but he turns out to be a bit of a dickhead (he has a cry about having to wait around and stay erect while she finishes – damn, masculinity is fragile). So, that doesn’t work out, and then Lady C’s life sucks so much that she basically wants to die. Sir Hubby throws a little bitch fit of his own, because Lady C wants to get a servant. There’s a lot of arguments about capitalism.

Lady C eventually finds a new lover in the form of the bogan gamekeeper, and that cheers her up for about a minute – but from then on, it’s just a downhill run of symbolism. “Oooh, the aristocrat is having an affair with a commoner, industrialisation is bad, capitalism is bad, the intellectuals have unfair dominion over the working classes!”, etc etc. God, there is so much whining!

The dirty bits were really far too few and far between to hold my attention at all. What’s worse: they weren’t even that dirty, really. The most obscene thing I came across was the gamekeeper dropping a few c-bombs (and I can see how that might have been shocking pre-sexual revolution, but now it’s pretty much par for the course). Other than that, it’s just a load of smack about Lady C being all aquiver and stirrings in her womb. Snore.

There’s a lot of Maury-esque drama, too. Lady C finally gets knocked up, but she runs away to Venice for a while so she can tell Sir Hubby that it was some Fabio over there that planted the seed (she’s worried he’ll fire the gamekeeper if he finds out he’s the one sticking it to his wife). Only, while she’s gone, the bogan gamekeeper’s bogan wife shows up and finds Lady C’s shit all over their bogan gamekeeper house. So, she throws a tanty and starts running her mouth off about what a cheating bastard he is. Word gets back to Sir Hubby, he puts two and two together, and Bogan Baby Daddy Gamekeeper gets fired anyway. Lady C gets to go back to complaining about how much life sucks.

She does her best to salvage the situation – by roping her father and sister into a plot to convince Sir Hubby that the foetus is actually someone else’s, but that spectacularly flops (shocking, I know). She has half an idea to marry Bogan Baby Daddy Gamekeeper instead, but he’s not acting happy enough about the pregnancy. And this is pretty much where the novel ends: Lady C and Bogan Baby Daddy Gamekeeper sitting around at opposite as the opposite ends of the country, waiting for divorces from their respective spouses. The ending is almost as anticlimactic as the sex scenes.

I had such high hopes, and Lady Chatterley’s Lover shat all over them. The only redeeming quality was a few cracking one-liners:

“They were just as good as the men themselves: only better, since they were women.”

“Oh, intellectually, I believe in having a good heart, a chirpy penis, a lively intelligence, and the courage to say ‘shit’ in front of a lady.”

“Sex and a cocktail: they both lasted about as long, had the same effect, and amounted to about the same thing.”

Overall, though, even the occasional lol wasn’t enough to save Lady Chatterley’s Lover; the $5 price now seems not such a bargain. After all, you can find better filth on the internet for free… or so I hear 😉

Why Do We Read True Crime?

What The Smut? Books That Are Sexier than Lady Chatterley’s Lover