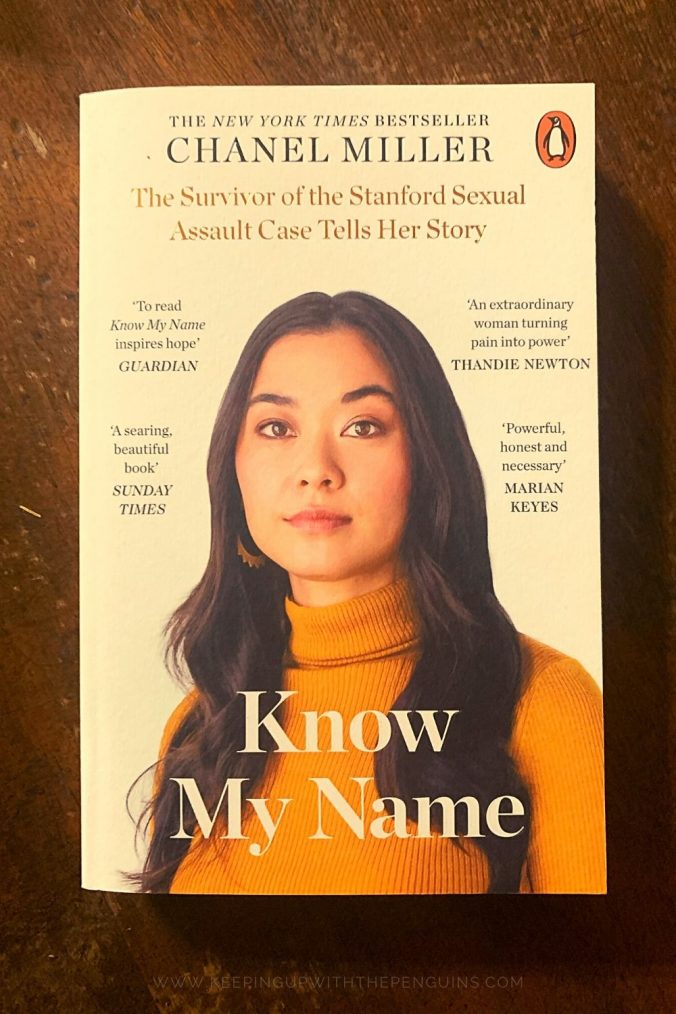 In 2016, the name Brock Turner made headlines around the world. He was sentenced to just six months in jail after he was convicted – literally caught in the act – of sexually assaulting a young woman on the Stanford campus in California. His victim, identified then only as Emily Doe, wrote an impact statement which was shared online; it went viral, and reached millions around the world within days. Three years later, Chanel Miller stepped forward and identified herself as Emily Doe, the until-then anonymous victim of the man whose name has become inextricable from conversations about sexual assault, sentencing, and #MeToo. In Know My Name, Miller reclaims her name, her story, and the years lost to her silent battle.

In January 2015, Miller was a 22-year-old graduate living in Palo Alto. One night, on a whim she decided to attend a Stanford campus party with her sister and friends. Within hours, Brock Turner sexually assaulted her, and she became “unconscious intoxicated woman” – Emily Doe. In Know My Name, Miller doesn’t ease you into this harrowing story with any meandering anecdotes about her upbringing. She’s setting this scene for her assault by page 2.

I was deeply disturbed to realise, in these early chapters, just how little Miller was told about what had happened to her once she regained consciousness, even after she made it abundantly clear to doctors and police that she had no memory of leaving the party. One of the most confronting scenes from Know My Name (and that’s saying something) comes when Miller learns the details of her assault from a news article, sitting at her desk at work. At the same time as the rest of the world, she read about her assailant’s dreams of swimming at the Olympics and his record-breaking pace, alongside the allegations that he had violently penetrated her with his fingers and left her mostly-undressed on the ground behind a garbage bin when two cyclists intervened.

He was the one who lost everything. I was just the nobody it had happened to.

This pattern plays out time and time again in Know My Name, each instance as sickening as the last: the perpetrator’s accomplishments and ambitions are highlighted, his crime(s) diminished, Miller’s pain and suffering barely mentioned.

The judge had given Brock something that would never be extended to me: empathy. My pain was never more valuable than his potential.

Of course, the assault is only the beginning. Over the course of Know My Name, Miller recounts in gut-wrenching detail the ways in which she was repeatedly violated over the following years: the investigation, the hearing, the trial, the sentencing, the aftermath. Institutions seem to fail her at every turn. The courtroom turns into a circus with rival ringleaders, each seeking to make their own performing monkey seem most sympathetic to a jury. The administrators of Stanford offer Miller little more than a pamphlet and a condescending pat on the shoulder, their fears of litigation and bad publicity far outweighing any fear they have for the safety of students and visitors to their campus.

Miller does remind us at intervals (though she shouldn’t have to) that Know My Name exists for so many people. One in five women have a version of this story that they could tell. What happened to Miller is not an isolated incident, it was not an extraordinary once-off. It happens every day, in every part of the world. It’s an excellent companion read to She Said (the journalists’ account of breaking the Harvey Weinstein story), in that regard.

It struck me, about halfway through Know My Name, that this was the first full account I’d ever read of the victim’s journey through the judicial system. In TV dramas, they cut right from the confession to the guilty verdict, and everyone goes home feeling justice has been done in 38 minutes. Miller’s account exposes the indefinite timeframes, the potential minefields, the unexpected demands – women just don’t know that this is what they’re agreeing to when they’re encouraged to report. Collectively, we “know” that it’s difficult, demoralising, retraumatising, but that knowledge is abstract. By sharing the full story in Know My Name, Miller makes it tangible.

She also emphasises the ripple effect of trauma. The man who attacked her didn’t only victimise her, he victimised her sister, her parents, her grandmother, her friends. Her sister lives with enormous survivor’s guilt. Her parents had to see close-up images of Miller’s brutalised vulva displayed in the courtroom. Her friends had to fend off reporters and the defendant’s investigators looking to dig up dirt. One assault, so many victims.

Chapter 12 provides a particularly striking rebuttal to the “but what about innocent until proven guilty?” argument. Miller lays out all the ways in which we currently interrogate the past behaviour of the victim (what they drank, what they wore, who they’ve slept with); if the victim can’t be “innocent until proven guilty”, why should their attacker be? The benefit of the doubt doesn’t seem to extend to the person who is bleeding. Miller has been caught in this trap herself, but incredibly she has retained the capacity to articulate the flaws of the “system” in stunningly eloquent ways. “When a victim does go for help, she is seen as attacking the assailant,” Miller says in Know My Name. “Inherently the victim is outnumbered,” (page 287-8).

It’s hard not to turn this review into a series of extracts; Miller’s voice is that powerful. Just one more…

For years, the crime of sexual assault depended on our silence. The fear of knowing what happened if we spoke… The barricades that held us down will not work anymore. And when silence and shame are gone, there will be nothing to stop us.

Goosebumps, right? This is an incredible read, on every level: as a tool for dismantling the patriarchy, as a masterfully-crafted narrative, as an account of crime and justice, and as a radical testament to the costs of survival.

7 Books To Buy For Men In Your Life