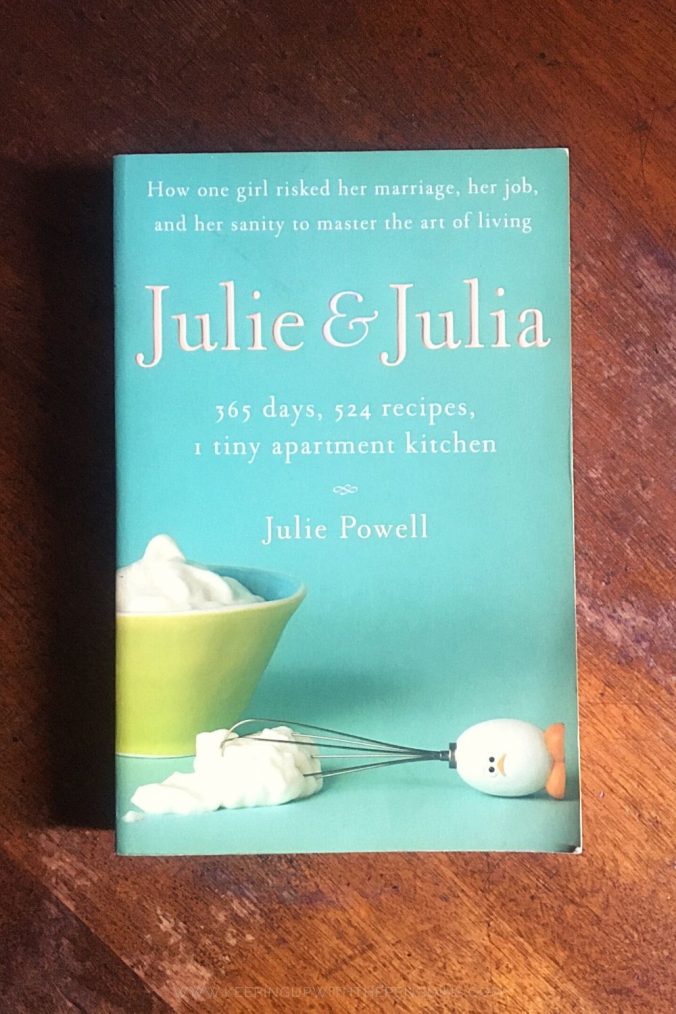 Julie Powell’s life in the early ’00s was a bit of a bummer. She was working a dead-end secretarial job, fielding the public’s suggestions for a Ground Zero memorial. She was diagnosed with PCOS and, given that she was nearly thirty, the pressure to produce a child (from all corners: familial, professional, and internal) intensified. On the verge of existential crisis, she did what so many of us do: she sought out a Project, and she found it in her mother’s battered copy of Julia Child’s Mastering The Art Of French Cooking. Julie And Julia is her memoir, based on her blog, about her year of cooking dangerously.

It’s the contemporary domestic equivalent of a herculean feat: 524 recipes, in 365 days. What’s more, Powell only had one tiny apartment kitchen to work in, not to mention an aversion to eggs and no bloody idea where to buy offal or marrow bones. Naturally, mishaps and misadventures ensue.

Powell started the project in August 2002, when blogs were still new, mysterious little rabbit-holes of the internet where one could build a large following relatively quickly if they were doing something no one else was blogging about. Her mother thought she was crazy, and most of her friends did, too – thoughts that Powell doesn’t mind repeating for the reader, and huffing about at length (but after all, as Anne Lamott said, “if people wanted you to write nicely about them, they should have treated you better”). Her only steadfast supporter is Eric, her husband, but even he blanches at some of the more adventurous recipes, and his patience is tested by Powell’s frequent cooking-induced melt-downs.

As she tells her own story, in chronological episodic form (not unlike a blog), Powell weaves in imagined scenes from Julia Child’s life. Drawing on biographies, letters, and photographs, she paints a very rosy picture of Julia’s romance with her husband, Paul, and how she came to love French cooking. These are decorative touches, however; Julie Powell is the meat of the story, Julia Child just the garnish.

In other reviews and articles, a lot has been made of what Julia Child herself thought of Powell’s project (in sum: she wasn’t a fan, really). I’m kind of disappointed that so much focus has been trained on that one aspect of this quite-remarkable story. I find it much more interesting to look at what drew Child to cooking initially, and what parallels can be found in Powell’s experience.

Child, for instance, didn’t learn to cook until the age of 37, and once she’d figured it out (graduating from Le Cordon Bleu cooking school, no less), she set about spreading the word. She published Mastering The Art Of French Cooking in service of teaching the average “servantless” American to cook like a gourmet chef – or, to put it more simply, she made high-falootin’ food accessible.

Isn’t that essentially what Powell has done with Julie And Julia, too? Granted, she’s not teaching us how to cook (she just barely includes a single recipe, it’s not a cook-book after all), but she is making it feel like an achievable goal at least. Before reading Julia And Julia, I would have felt more comfortable skydiving than attempting any fancy-pants French cooking. I’m not one of those can’t-boil-water types, but my idea of a hearty home-cooked meal is more bangers-and-mash than boeuf bourguignon (in fact, I even had to Google how to spell the latter, twice). Seeing that Powell, like me, didn’t have all the tools or know-how when she started off and still she gave it a go… well, “inspirational” is a gross word, but it instilled a little confidence. I even went out and bought a leek.

What’s more: both Julie and Julia are unafraid of admitting their mistakes. Granted, Julie might drop a few more f-bombs, but they both hasten to reassure readers that cock-ups are a natural part of learning to cook. As Julia once said, “If you’re alone in the kitchen, what does it matter – who’s there to see you?”.

I don’t want to mislead you, though: Julie And Julia is just as much about marriage and existential dread as it is cooking. Powell weaves in memories of her childhood and youth, hopes and fears for her future, making the story more comprehensive than just a single year in her life with one ambitious project as its focus. I think that was a good call, on her part, preemptively answering our desire for authenticity in such accounts and saving us from a repetitive cooking procedural (if that’s what you’re after, seriously, go find a recipe book).

Of course, not long after publication, Julie And Julia was adapted to a film of the same name, starring Meryl Streep(!) as Julia Child and Amy Adams as Powell. I watched it once, years ago, and I can’t say I remember much, other than it was good and funny and Meryl Streep was brilliant. I’ll have to watch it again, soon. In doing some Googling for this review, I learned that it was actually the last film written and directed by Nora Ephron before she died, which makes it extra-special.

So, final verdict: I liked it. Sure, Powell’s snarky sense of humour and tendency towards histrionics won’t be to everyone’s taste, but what is? Julie And Julia is a good, quick read that – if you’re anything like me – will inspire you to pick up the tongs instead of ordering UberEats for the fourth night in a row. If it doesn’t sound like it’s up your alley, that’s fine, because I’m going to share with you the single most important take-away of the whole book: put more butter in everything. Seriously. That pat of butter you normally use? Double it.

6 Books I’d Live By For A Year