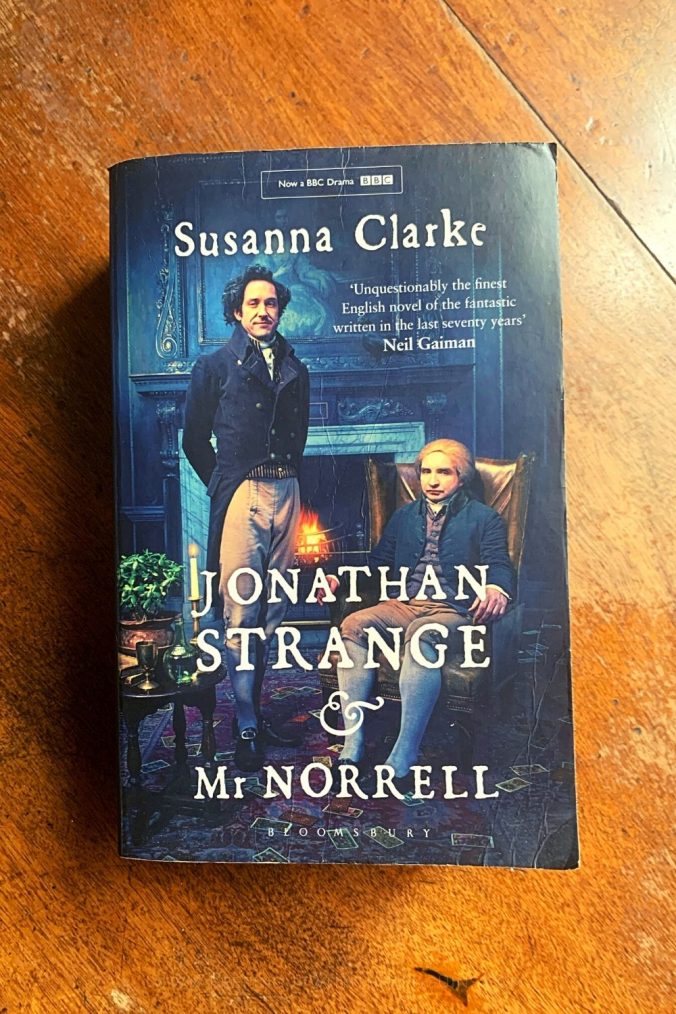 Last year, a little book called Piranesi bowled me over and won my heart. I felt compelled to seek out author Susanna Clarke’s only other novel, a comparatively hefty tome (four times the length, 1000+ pages!) published 16 years prior. Clarke started work on Jonathan Strange And Mr Norrell back in 1992, and worked on it for ten full years before submitting it for publication. So, as I’m sure you can tell already, this book is an undertaking. Just finishing it feels like a triumph! I can only provide a potted summary, though, less this review become almost as long as the book…

(And by the way, there are some gorgeous illustrations in my edition, contributed by Portia Rosenberg – I highly recommend seeking out a copy that includes them!)

Jonathan Strange And Mr Norrell is an alternative history, set in early 19th century England (think Napoleonic war era). As Clarke tells it, magic once ran rife through the British Isles, but has since disappeared entirely… only to suddenly return to two particular men, Jonathan Strange and (you guessed it!) Mr Norrell.

These two are a magical Odd Couple. Jonathan Strange is young, adventurous, and impulsive. Mr Norrell is a cantankerous bookworm, a fusspot of the highest order.

Clarke’s mastery of storytelling is on display right from the get-go. The first chapter of Jonathan Strange And Mr Norrell is exquisitely crafted: word built, exposition clear (but not patronising to the reader), and the hook baited. You can’t help but dive in! The Learned Society of York’s “theoretical magicians” (i.e., old white men who study the history of magic, even though they can’t perform it) is stunned to learn that Mr Norrell – curator of the world’s largest personal library of magic books and books about magic (they’re different) – can actually perform it. Norrell compels them to disband their silly gabfest club, and goes about quietly studying and practicing magic all on his own.

Strange, on the other hand, decides on a whim to simply Be A Magician. He doesn’t know jack about magic or its history, but when has that ever stopped a rich white guy? He travels to meet Norrell (who is now living in London), and blags his way into becoming his student. The two clash – frequently, and how – over the proper conduct of magic, the importance of the legendary Raven King, the employ of fairies, and just about everything else. They battle along for a while, learning from each other and trying not to kill each other, until the conflict becomes too much and they part ways.

Jonathan Strange heads off abroad to help out the troops by magicking up roads and favourable weather conditions, completely on the fly (in fact, heads up, the Napoleonic wars play a much bigger role in the narrative than you might expect), while Norrell stays in London and publishes a lot of stuffy books and papers about the Proper application of English magic. Astoundingly, people actually want to read them, and England ends up divided into “Norrellites” and “Strangites”.

Reminder: I’m skipping over a LOT. Jonathan Strange And Mr Norrell is over a thousand pages long. A LOT happens. The pacing fluctuates throughout. Sometimes, it was so compelling I felt like I couldn’t turn the pages fast enough. Sometimes, it dragged so much that I wondered whether I would ever finish it. That said, I attribute the latter feelings to my own impatience (after everything that 2021 has thrown at my brain), rather than any fault in Clarke’s storytelling.

We get Norrell’s side of the story in the first volume, Jonathan Strange’s in the second, and the third ties it all together with a focus on the Raven King. Jonathan Strange becomes involved in increasingly dark and dangerous experiments, to try and counteract some of the personal tragedies that have befallen him, and Norrell gets a few boots up the bum to remind him to get his nose out of a book every once in a while. Most importantly, the true nature of the book’s villain is revealed, one of the greatest mysteries I’ve ever encountered in contemporary literature: The Man With The Thistle-Down Hair.

Clarke offers a Tolkien-esque level of detail in her speculative history (though she’s far less dull in the telling of it). In fact, she once said that she re-read Lord Of The Rings when she first had the idea for Jonathan Strange And Mr Norell, so the parallel seems natural. She pulls from every literary tradition you can imagine without becoming overwhelmed: the Gothic novel, the comedy of manners, the fantastic, the dramatic… She even gets her David Foster Wallace on and includes 200+ footnotes, each offering some gem of insight into her magical world.

What really sets it apart, though, is the wry humour. It’s like a blend of Jane Austen and Charles Dickens, with a contemporary comic sensibility. By way of example:

It has been remarked (by a lady infinitely cleverer than the present author) how kindly disposed the world in general feels to young people who either die or marry. Imagine then the interest that surrounded Miss Wintertowne! No young lady ever had such advantages before: for she died upon the Tuesday, was raised to life in the early hours of Wednesday morning, and was married upon the Thursday; which some people thought too much excitement for one week.

Naturally, given the book’s length and breadth, it’s a book about many things. It’s a scathing critique of bureaucracy, for one. It’s a book about “Englishness”, and the divide between North and South. It’s about the thin line that separates madness and reason. It’s about the “silencing” of underrepresented groups, and the capacity for social change.

That said, Clarke doesn’t rely on the sheer volume of Jonathan Strange And Mr Norrell to invoke all of this. It just so happened that this particular story had such a level of detail and traversed such a world that it required a lot of pages to tell. This isn’t one of those books where you can point to a hundred pages here, or a hundred pages there, and say: “oh, she didn’t really need that, you can skim it or skip it”.

Prior to the publication of Piranesi, Clarke had mentioned in a couple of interviews that she started work on a sequel, focusing on a few of the minor characters. It would seem that progress has stalled (even halted), due to her experience of chronic fatigue syndrome. Her illness, she says, has made the effort to research and write a comparable book is “insurmountable”. I, for one, don’t need a sequel and would rather she save her energy for other endeavours. Jonathan Strange And Mr Norrell is a remarkable book, one that says everything it needs to (though it would undoubtedly take many readings to truly hear it all).

My favourite Amazon reviews of Jonathan Strange And Mr Norrell: