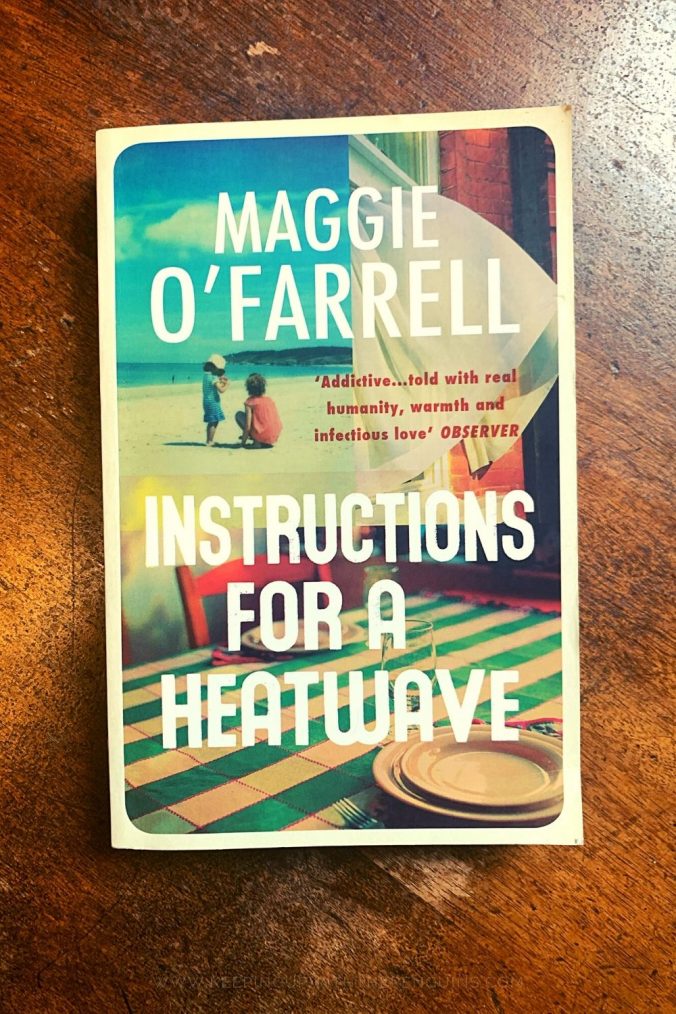 Instructions For A Heatwave – Maggie O’Farrell

Instructions For A Heatwave begins on 15 July 1976, and takes place over the following four days. The Riordan family is living through an unprecedented heatwave, with the accompanying drought and water shortages. It’s the third month of incredible heat and no rain – routine in Australia, where I’m reading, but a bit fucked for the characters in London. The heatwave, it turns out, is an obvious but well-written metaphor for the pressure cooker situation the Riordan family is about to find themselves in…

The matriarch of the family, Gretta, thinks that it’s any ordinary day: her husband wakes up, goes out to get the paper… except he never returns. His disappearance is the catalyst for a family reunion, of sorts, as Gretta and her grown children come together to try and figure out what the heck has happened.

Each of the Riordan siblings has their own secrets and foibles that the others know little, or nothing, about (and Gretta’s hiding a few things under her hat, too). Michael Francis is a history teacher whose marriage is failing. Monica has two stepdaughters who hate her, and she’s questioning the choices she’s made to wind up in the role of would-be Stepford Wife. Aiofe – the most interesting character, to me – has always been the black sheep, which has made it easier to hide her debilitating dyslexia from everyone. She can’t read, and nobody knows but her.

Even though Instructions For A Heatwave is predicated on solving the mystery of the father’s disappearance, I found myself far more invested in whether Aiofe’s secret would be outed. Dad’s disappearing act ends up being somewhat beside the point. I still can’t figure out whether that was O’Farrell’s intention or not, but whatever the case, the complexities of these grown sibling relationships, and the difficulties of Aiofe’s hidden disability, are the most interesting aspect of the novel.

It’s particularly impressive how O’Farrell manages to unspool all of these narrative threads without getting them tangled. With interweaving backstories and multiple geographies (even though the family is based in London, they have carefully tended to their Irish roots, and Aiofe had “flounced off” to New York three years before the narrative timeline began), you’d expect things to become muddled, but O’Farrell does a remarkable job at guiding the reader through.

In real life, O’Farrell had some interesting things to say about the role of family in Instructions For A Heatwave, and fiction more generally:

In any home, every member of the family has a unique relationship with every other. Five people, locked together for an entire lifespan, add up to a complex knot of personalities, clashes, allegiances and schisms. Nobody knows you quite like a sibling or parent, and yet nobody is liable to misunderstand you with such conviction.

This is the endless fascination of family life, the desire to simultaneously run home and run away. Instructions For A Heatwave is a novel that revolves around the oxymoron of those urges…

Novels about family are sometimes referred to as ‘domestic fiction’; I refute this categorisation as it carries the implication that these are somehow small novels, dealing with minor human concerns. The family is far from a ‘small’ subject.

Maggie O’Farrell on Instructions For A Heatwave

Instructions For A Heatwave is my first novel by O’Farrell, and it would seem (from a glance at the blurbs of her others) that it has all the hallmarks of her fiction: family secrets, simmering resentments, and emotional claustrophobia. It slots into the middle of the Venn diagram of the “popular” and the “literary”, offering a rich family drama with a curious mystery to draw you in.

My favourite Amazon reviews of Instructions For A Heatwave:

In The Margins – Elena Ferrante

9 Books Where Something Is Going On

@keepingupwiththepenguinsonline
•
Follow
I loved, loved, loved Chris Flynn’s last book, Mammoth – it was one of the few things that actually made me laugh in the clusterfuck that was 2020. So, when I saw he had a new book coming out, I sat up straight and said “yes, please!” in my polite voice. The wonderful team at @UQPBooks came through and sent me a copy of Here Be Leviathans for review. . It’s a collection of nine short stories, narrated by animals, places, objects, and even the (very) odd human. A grizzly bear on the run, a plane seat in a terrifying crash, a genetically modified platypus with the power of speech – each and every one, bizarre and brilliant. Flynn really pushes the boundaries, and dammit, it works! My full review is up on the blog now (link in bio 👆) - 🐻🐻🐻🐻🐻/5 . Are you eagerly awaiting a new book from any particular author? I’m keen to read Celeste Ng’s forthcoming novel, and I can’t wait to see what Carmen Maria Machado does next! 🤗 . #HereBeLeviathans #ChrisFlynn #UQPBooks
View on Instagram |
1/9

@keepingupwiththepenguinsonline
•
Follow
The wait was worth it for this BOOK MAIL! 📬📦 Shout out to all the postal workers who put up with ridiculous disgruntled queues to bring us our beloved packages 💞 . #2022Books #BookMail #NewBooks
View on Instagram |
2/9

@keepingupwiththepenguinsonline
•
Follow
Some memoirs just leave you feeling better than you did before you read them 🥰 Even when the author describes going through terrible things, their voice and their attitude turns the worst of times into the best of reads. I’ve put together a list of eighteen(!) uplifting memoirs, it’s up on the blog now (link in bio ☝️). . #Memoirs #NonFiction #UpliftingBooks
View on Instagram |
3/9

@keepingupwiththepenguinsonline
•
Follow
Does this book really need an introduction? 💁‍♀️ I Know Why The Caged Bird Sings is Maya Angelou’s iconic 1969 autobiography, describing her youth and upbringing. It’s a story of radical transformation, from a nervous young girl subjected to racism and abuse to a self-possessed young woman with hope and determination 💪 . If I had to offer a criticism – like, under pain of death – I would say that it slows down a bit in the second half. Plus, the content is definitely going to be tough for some readers to handle (trigger warnings for racism, sexual abuse, and violence) 😳 But it’s just *so beautifully written*! I think critic Opal Moor put it well: “Though easily read, [I Know Why The Caged Bird Sings] is no ‘easy read’.” My full review is up on the blog now (link in bio 👆) - 🕊🕊🕊🕊🕊/5 . Which memoirs/autobiographies do you consider to be changed-the-game iconic? 🤩 . #IKnowWhyTheCagedBirdSings #MayaAngelou #5StarReads
View on Instagram |
5/9

@keepingupwiththepenguinsonline
•
Follow
Banned Books Week has begun! 🚫📕💪 . These are some of the most banned books in the past couple of years. Kind of hard to believe, eh? Fight the power and read a banned book today! . #BannedBooksWeek #BooksUniteUs #IReadBannedBooks
View on Instagram |
7/9

@keepingupwiththepenguinsonline
•
Follow
I was lucky enough to attend the launch of Her Fidelity at the iconic @Gleebooks venue, and Katharine Pollock was kind enough to sign my copy (that I was delighted to receive from @PenguinBooksAus for review) 📕 The conversation that night with @ErasablePoetry, a brilliant local poet, really wet my whistle 😙 . Her Fidelity – as the title would suggest – looks at the ‘glamorous’ world of slinging rock’n’roll records, through a female lens. It’s a sharp but charming book that I devoured in a single sitting. It was unexpectedly delightful to read a book about someone my age, from my actual home state, in a similar line of work – is there a word that goes beyond relatable? 😅 My full review is up on the blog now (link in bio ☝️) - 💿💿💿💿💿/5 . #HerFidelity #KatharinePollock #PenguinBooks
View on Instagram |
8/9

@keepingupwiththepenguinsonline
•
Follow
📬 Book mail! I was a bit baffled by the big, solid package at first… but hoo boy, I was NOT disappointed! Thank you @scribepub for sending through a copy of Men I Trust by Tommi Parish for review! All my thoughts coming soon, but (spoiler!) they’ll start with “it’s GORGEOUS!” 😍 . #BookMail #MenITrust #TommiParrish
View on Instagram |
9/9