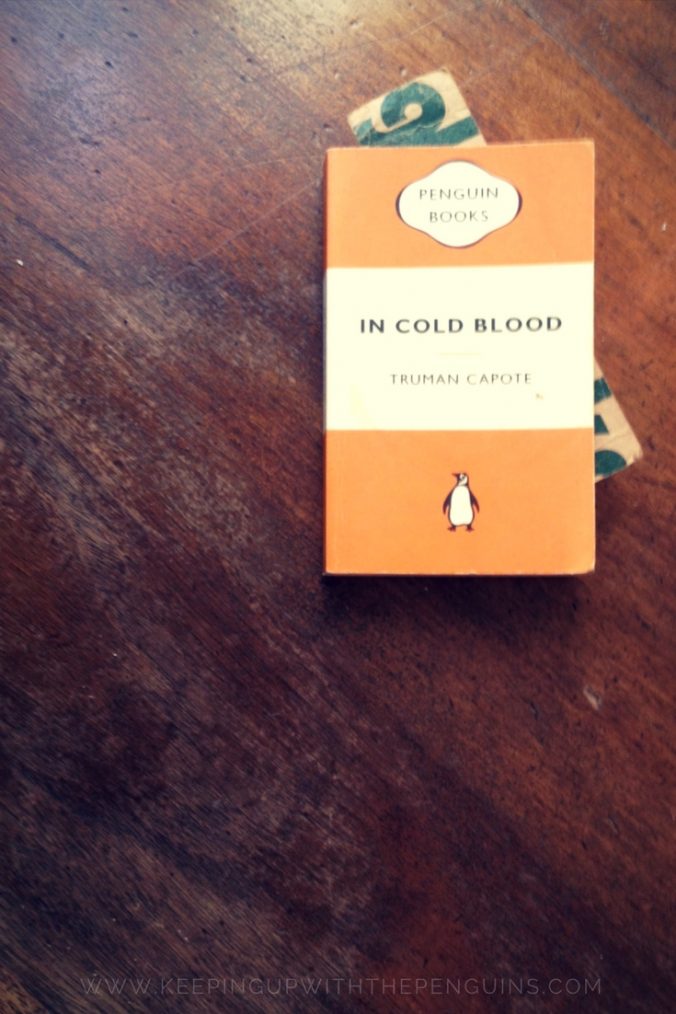 No one could ever accuse Capote of not putting in the hours: he spent six years researching and interviewing and generally sticking his nose where it didn’t belong, taking literally 8,000 pages of notes (what a masochist!), before finally sitting down to write In Cold Blood. Yeah, it’s one of the highest-selling true crime books in the history of publishing, and yeah, it’s bloody brilliant – but still! What an overachiever…

(His hard work didn’t exactly pay off as far as he was concerned. Despite an absolute avalanche of critical acclaim, Capote was hugely bummed that it never won a Pulitzer. He was desperate to top his buddy Harper Lee, who won the Pulitzer for To Kill A Mockingbird. Male egos, I tell ya!)

So, here’s the deal: Capote reads a tiny little piece in The New Yorker about a well-liked Kansas family getting merked in this weirdly motiveless and clueless crime. He figures that’s a good enough basis on which to pack up and ship off to a country town you’ve never heard of – dragging his BFF Harper Lee along with him, no less! – and figure out what the fuck went down.

The story’s not a “whodunit” per se, in the sense that you know who dun it right from the beginning – he weaves the stories of the killers and the victims together, and tells them side-by-side. You also kinda figure that the bad guys must get caught eventually (because it says so on the back of the book). I guess it’s more a “whydunit” (I call the trademark on that): why this family? How did they become the targets? What did the killers get out of it? Was it worth six lives?

He sets the story up in a really eerie way, with super-intimate descriptions of the lives of both the victims and the perps. You learn everything about their love lives and their pets and their phobias and how often they change their underpants. You’d think the arrest would be the climax, but that also happens early, only two-thirds of the way through.

You get to watch the bad guys suffer through the prisoner’s dilemma, and finally divulge all the gory details of their crime (tl;dr summary: they rocked up expecting to find a safe with ten grand inside, got pissed off when they couldn’t find it, argued about whether to rape the daughter, then neutralised all the witnesses by blowing their faces off with a shotgun, and all told they scored about forty bucks for their trouble). Capote follows their imprisonment, their trial, their endless appeals and – ultimately – their executions.

You’ll really get out what you put in with In Cold Blood. It can be read as a conservative defence of capital punishment (taking the bad guys’ eyes, just like Jesus would do), or as a scathing leftie indictment of the U.S. incarceration system (every single criminal character is a recidivist of some sort, having left jail only to return a short time later). In that regard, it’s really artfully done.

Unsurprisingly, though, you do kinda have to take off your journalistic-integrity hat. It doesn’t read anything like a non-fiction book: it reads as a novel. So, inevitably, there are endless questions as to its veracity, and I don’t think there can be any doubt that Capote was pretty liberal with the ol’ creative license.

I would wholeheartedly recommend In Cold Blood (as long as you’re not a kill-joy that takes things too seriously and gets mad when Capote takes some liberties with the truth). I’ll definitely read it again. Chilling, but fascinating!

Why do we read true crime? I wrote about the booklover’s fascination with the chilling reality of grisly murders like this one here.

My favourite Amazon reviews of In Cold Blood:

The Best Villain Downfalls in Literature

Why Do We Read True Crime?