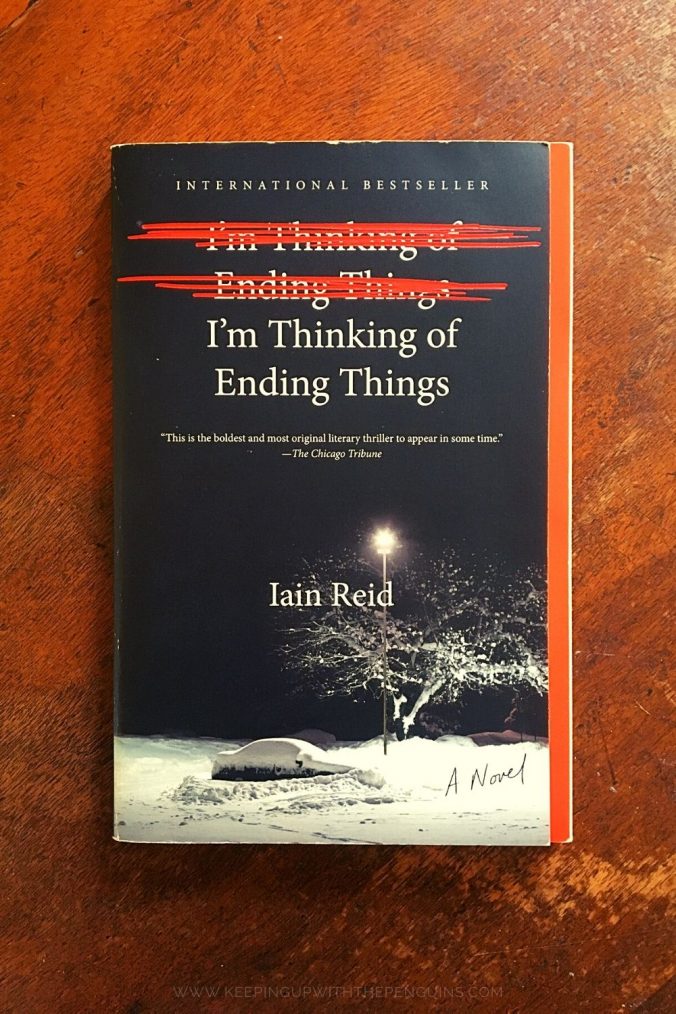 Iain Reid was already an award-winning nonfiction writer when he decided to turn his hand to fiction. I’m Thinking Of Ending Things is his first novel, and despite his past success, he had trouble finding anyone willing to publish it. “Just about everyone in Canada rejected it,” he has said, “until Simon and Schuster made a modest offer.” I bet they’re I-told-you-so-ing all over town, because I’m Thinking Of Ending Things went on to become a New York Times Best Seller, got translated into twenty languages, and scored a Netflix adaptation.

I’m Thinking Of Ending Things is a road trip novel in the psychological thriller/horror fiction vein. My edition – and most editions, I think – comes with no blurb, so you truly go in blind. The story begins with a nameless narrator and her boyfriend, Jake, in a car en route to visit Jake’s parents for the first time. She’s thinking of ending things, but Jake doesn’t know that yet.

That’s not all Jake doesn’t know yet. Our narrator is also being stalked by The Caller, a man who leaves her cryptic voicemails, somehow calling her from her own number.

So, yeah. You’re already drowning in hints that something’s hinky.

The evening with Jake’s parents, on a remote farm in the middle of winter, is creepy as hell. The conversation is awkward, the parents are weird, and the narrator can’t make sense of the weird things she sees – like a photo of herself as a child in Jake’s room. They only met a few months prior at a pub trivia night, so it seems impossible that he could have it, but she’s soon distracted by another unsettling conversation with Jake’s dad and a visit to the harrowing basement.

How do we know when something is menacing? What cues us that something is not innocent? Instinct always trumps reason.

On the drive home, Jake wants to stop for ice cream. The narrator thinks she recognises one of the girls behind the counter, and is extra-creeped out when the girl subtly mentions being “worried” for her. When they leave, Jake comes up with a flimsy excuse to detour past the local high-school. And that’s where I’m Thinking Of Ending Things really takes off.

The chapters are interspersed, too, with italicised pages – apparently extracts from a gossipy conversation about some kind of tragedy or scandal. They gradually nudge the reader towards the novel’s horrifying conclusion.

I’m Thinking Of Ending Things would be a great spooky read for Halloween. I read it all in one night, because I definitely would have had nightmares if I’d put it down halfway. Mr Keeping Up With The Penguins walked into the room unexpectedly when I was about three-quarters of the way through, and I jumped so high my head just about hit the ceiling.

The ending was a bit murky, though, and it didn’t quite satisfy after such a hair-raising build-up. This might be one where you have to google “I’m Thinking Of Ending Things ending explained” after you finish. Reid has said that he left things open to interpretation on purpose, because he “appreciates books that put some of the onus onto me to decipher and complete the story”. That’s great and everything, but I like my mysteries completely solved – if only so I can still get a good night’s sleep afterwards.

My favourite Amazon reviews of I’m Thinking Of Ending Things:

Books Made Into Movies, Horror, Thriller

Remainders Of The Day – Shaun Bythell

10 Classic Books Everyone Should Read