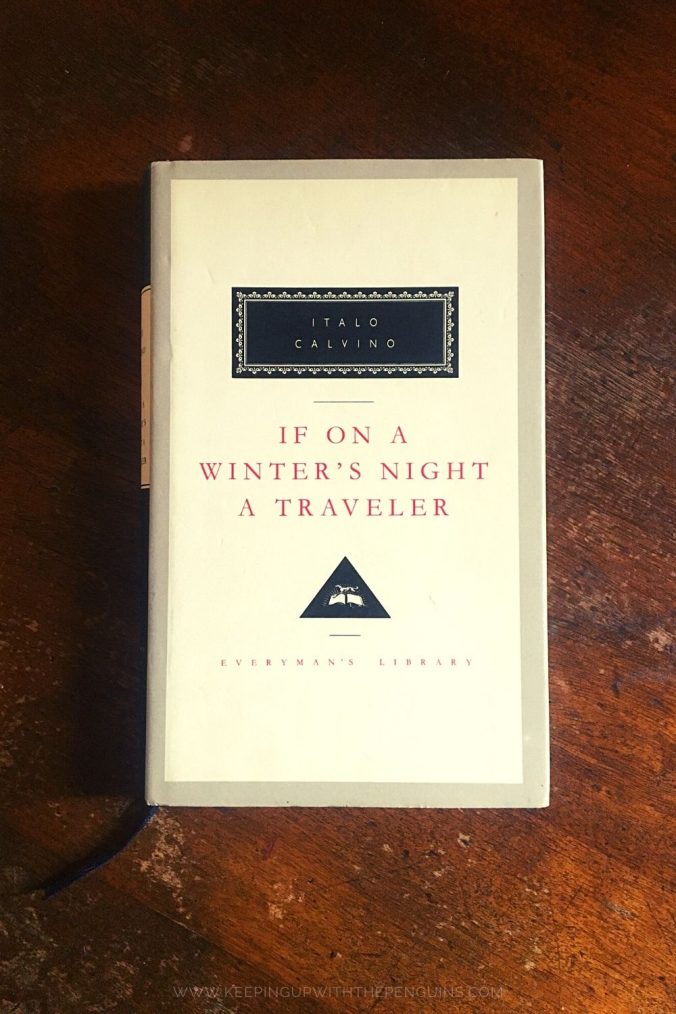 If On A Winter’s Night A Traveler – Italo Calvino

You are about to begin reading a review of Italo Calvino’s novel, If on a winter’s night a traveler. Relax. Concentrate. Dispel every other thought. Let the world around you fade…

Don’t worry, I’m not going to keep that up for the whole review! Yes, I shamelessly ripped off the famous opening line to Calvino’s “dazzling post-modernist masterpiece” If On A Winter’s Night A Traveler (in the original Italian Se una notte d’inverno un viaggiatore, translated into English by William Weaver, #NameTheTranslator). It’s one heck of an opener, clever and unsettling – which pretty much sums up the whole book, if I’m honest.

The introduction to my edition, by Peter Washington, describes If On A Winter’s Night A Traveler as “a treatise on writing and a treatise on reading”, which I suppose it is… in a way. Each chapter is split in two: the first part is a second-person narrative (you go here, you do this, etc.), while the second part is an extract from the book “you” are reading. Except that after the first chapter, “you” discover that the book was misprinted! “You” go back to the bookshop to get a new copy, where they tell “you” that there’s been a drama at the printers, and while “you” can’t get the book you actually wanted to buy initially, “you” can get the book you actually started reading, and…

Confused yet? Yeah, imagine actually having to read the thing. The story gets interrupted this way ten more times.

Along the way, “you” meet Ludmilla, for whom you develop an instant and impressive boner. She’s on the same quest “you” are, to find and read the book that captured your interest… and then the one after that… and then the one after that… It’d be a nice love story, except that “you” also end up investigating a translator for fraud(?), an unwitting participant in a book smuggling ring(??), and an early reader of the new manuscript of Silas Flannery(???) who somehow has fallen in love with Ludmilla’s sister(????). “You” are Alice, and the rabbit hole goes all the way down.

It’s clever, it’s interesting, it’s masterfully written… but I kept falling asleep. If On A Winter’s Night A Traveler is the most soporific novel I’ve picked up since The Golden Bowl. When I wasn’t dozing off, I’d catch myself mentally reviewing my grocery list or wondering about what I might read next. I found it incredibly hard to focus on this “dazzling post-modernist masterpiece”; it wasn’t dull, but it wasn’t engaging. I could appreciate that the writing craft was excellent, but I couldn’t ignore that the reading experience was so-so (at best).

Apparently, If On A Winter’s Night A Traveler was inspired by Calvino’s involvement with the Oulipo group, a gathering of writers and mathematicians in France in the 1960s. They all wanted to interrogate the structure of art, or some shit. It’s all very post-modern (blegh). There are plenty of other gushing reviews by brainy types who are high on Calvino’s fumes (if you came here looking for one of those, sorry). I can see why they love it, but it ain’t for me.

Let’s revisit that blurb, shall we? “Dazzling”? Nah. “Post-modern”? Definitely. “Sardonic”? Hardly. I’m sorry to say that If On A Winter’s Night A Traveler didn’t make any real impression on me, favourable or otherwise. If someone were to ask me whether it was worth reading, all I could do is shrug. The most memorable part was the final chapter and epilogue, absolute crackers – but maybe I was just glad to be done.

My favourite Amazon reviews of If On A Winter’s Night A Traveler: