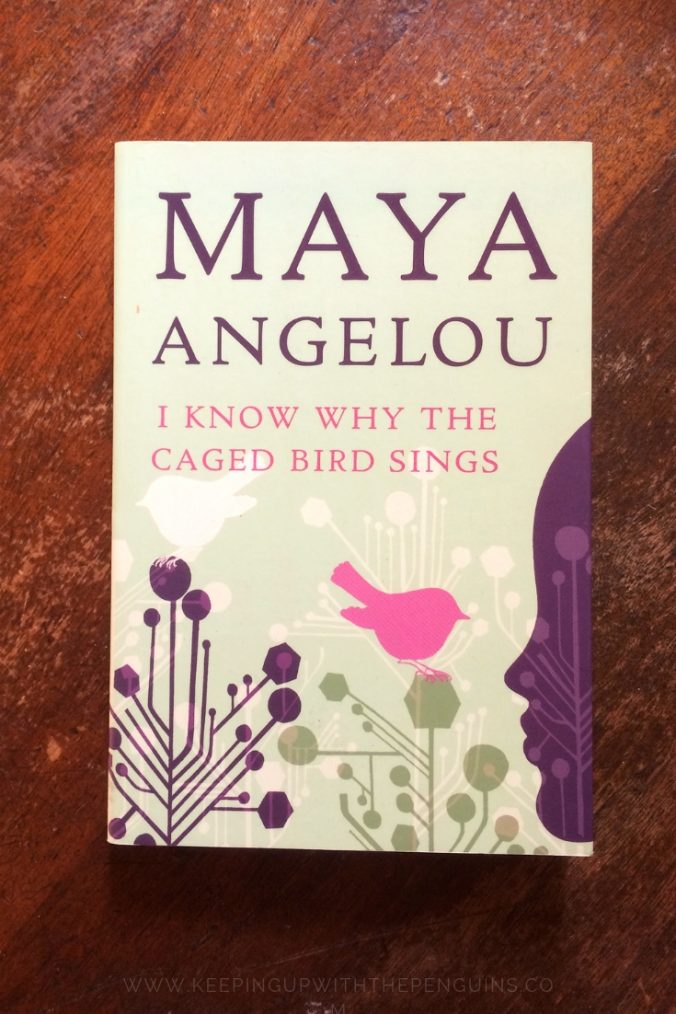 I Know Why The Caged Bird Sings – Maya Angelou

Does this book really need an introduction? I Know Why The Caged Bird Sings is Maya Angelou’s iconic 1969 autobiography, describing her youth and upbringing. The title comes from the third stanza of Dunbar’s poem “Sympathy” (which is well worth reading in full, if you’ve got a moment). It’s one of the most acclaimed autobiographies in the history of literature, and with good reason.

By the way, a note on choosing your edition: mine is gorgeous, but it doesn’t have the foreword by Oprah. If I had my time again, I’d prioritise that over prettiness.

I Know Why The Caged Bird Sings traces Angelou’s life from age three to seventeen, artfully recreating the perspective of the child while retaining the wisdom of the adult narrator. She and her older brother, Bailey, were abandoned by their parents and sent to live with their grandmother (whom they call Momma) in Stamps, Arkansas. Several years later, Angelou’s father unexpectedly appears and takes the children to live with their mother in St Louis. There, aged just eight years, Maya is sexually abused by her mother’s boyfriend. This horrifying event has ongoing ramifications throughout her young life (obviously).

The traumatised Angelou proves too much for her mother and St Louis family to handle, so she and Bailey are sent back to Stamps. There they remain until after Angelou graduates eighth grade, a watershed moment in her young life. Momma then decides that the children are ready to return to their mother, who was by then living in California.

Angelou attends high school while living with her mother (whom she adores, despite the earlier traumatic experience in her St Louis home). Before she even graduates, Angelou becomes the first Black female cable car conductor in San Francisco. She relishes the independence and responsibility that comes with entering the workforce, but she still experiences the usual confusion and angst that comes with adolescence. In a moment of desperation, to prove to herself that she “isn’t a lesbian”, she sleeps with a local teenage boy and becomes pregnant.

She manages to hide the pregnancy from her family for eight months, until she graduates high-school, and at seventeen years of age, she gives birth to her son. It’s remarkably not a particularly traumatic experience for her, and I Know Why The Caged Bird Sings ends on a positive and hopeful note as Angelou embarks on motherhood.

So, as that potted summary might indicate, I Know Why The Caged Bird Sings depicts a radical transformation, from a nervous young girl subjected to racism and abuse to a self-possessed young woman with hope and determination. At many critical junctures, books and literature provide solace to Angelou, and it’s through the power of the written word that she reclaims her own agency and makes sense of her bewildering world. It’s a powerful coming-of-age story, especially for fellow bookworms, and it’s impossible to read this one without feeling uplifted in some way (despite the traumatic content).

It reads like a novel (even though, obviously, it’s not) – beautifully, lyrically, with rich and inviting prose. It would seem that’s very much by design; Angelou wrote I Know Why The Caged Bird Sings in response to a challenge issued by her friend James Baldwin and editor Robert Loomis, to “write an autobiography that was also a piece of literature”. She later said that she felt “tricked” into writing the book (she initially refused, as she thought of herself as a poet rather than a memoirist, but couldn’t resist the challenge), but given the result, I think we can forgive Baldwin and Loomis the manipulation.

The literary feeling isn’t just a “vibe”. Many fancy-pants literature critics have commented on it, categorising I Know Why The Caged Bird Sings as “autobiographical fiction” rather than straight narrative non-fiction. But Angelou herself resolutely called this and her subsequent books autobiographies, and thematically they align very neatly with other autobiographies by Black women. Basically, let’s not punish Angelou for writing so damn well that we can’t believe it’s real.

If I had to offer a criticism – like, under pain of death – I would say that I Know Why The Caged Bird Sings slows down a bit in the second half. Plus, the content is definitely going to be tough for some readers to handle (trigger warnings for racism, sexual abuse, and violence). But it’s just so beautifully written! I think critic Opal Moor put it well: “Though easily read, [I Know Why The Caged Bird Sings] is no ‘easy read’.”

My favourite Amazon reviews of I Know Why The Caged Bird Sings: