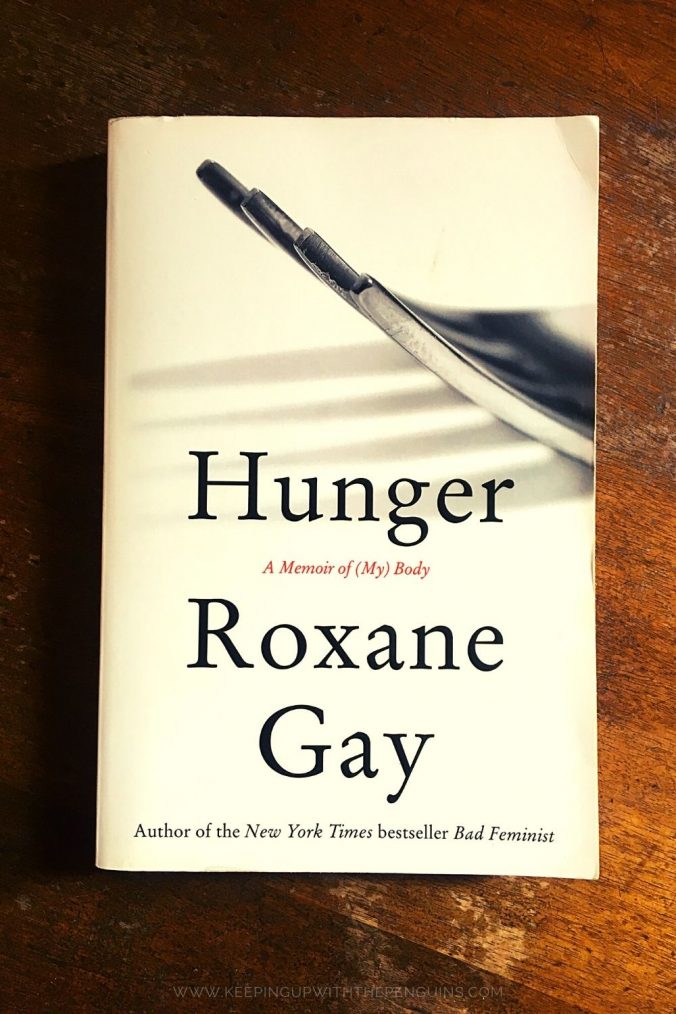 “The story of my body is not a triumph,” Roxane Gay writes in the opening pages of her 2017 memoir, Hunger. “This is not a weight-loss memoir… Mine is not a success story. Mine is, simply, a true story.”

In short, vignette-like chapters, Gay describes her rapid weight gain in the wake of a devastating trauma (to say the least), and her life lived in a fat body. Take this as your trigger warning: Hunger includes detailed descriptions of sexual assault and disordered eating – and this review is going to cover them, too.

Gay is not ‘voluptuous’ or ‘pleasantly plump’. She isn’t even obese, or morbidly obese. She is, she tells us in Hunger, ‘super morbidly obese’. She is completely frank in describing her shame about her body’s size, and her desire to be thin or ‘normal’. She sees her body as a “cage of her own making”, one that has certain benefits (more on those in a minute) but overwhelming downsides.

She brilliantly articulates the conflict and contradiction of living in a fat body. She ‘knows’ that we ‘should’ love our bodies as they are, for what they can do, and feed them with fuel while rejecting diet culture… but that knowledge doesn’t (always) correspond with her feelings. It’s possible to know all the body-positive catch-phrases, but not to feel the way they say we should, when we exist in a world that is so pervasively and inherently anti-fat.

But Hunger is not just one long confession about self-loathing and body image. Gay delves deep, deeper than we could ever hope or expect, into the reasons she has the body she does. As a tween, Gay was the victim (her preferred nomenclature, though she respects the use of ‘survivor’ by those who choose) of a violent sexual assault, perpetrated by a boy she believed to be her boyfriend and his friends. She was gang raped, and she told no one. It’s horrifying and heart-breaking and horrendous.

That experience was defining, in that Gay began to eat as a means to self-soothe after that event, and as a means to become physically repulsive to men. Her body is a rejection of the male gaze made manifest, the only way a young Gay could see to protect herself from further violation.

Hunger is a study in contradictions. Physical heft bought Gay personal space and a layer of protection, but it also made her body public property – the subject of opinions and input from complete strangers, uninvited. She is encouraged at every turn to ‘get healthy’, to ‘lose weight through diet and exercise’, without any consideration for the cause of her weight gain to begin with (not to mention the impossibility of finding active wear that will fit her). And, as I mentioned a second ago, Gay interrogates the conflict between the way the body positivity movement says she ‘should’ feel about her body, waging constant war against every other message (internal and external) she receives about the way she looks.

Throughout Hunger, Gay addresses clothes, diets, bulimia, public spaces, doctors, food – all the aspects of her life that her size touches. If you are of average size yourself, or even close to it, it will be revelatory the ways in which weight can stymie your capacity to simply go about your business.

Gay has described Hunger as “by far the hardest book I’ve ever had to write”, and it’s not hard to see why. I cannot fathom the bravery and strength it took for her to simply put these words on a page, let alone share them with the world in a best-selling memoir. I’m in awe of her, honestly, and I’m sure after reading Hunger you will be, too.

My favourite Amazon reviews of Hunger: