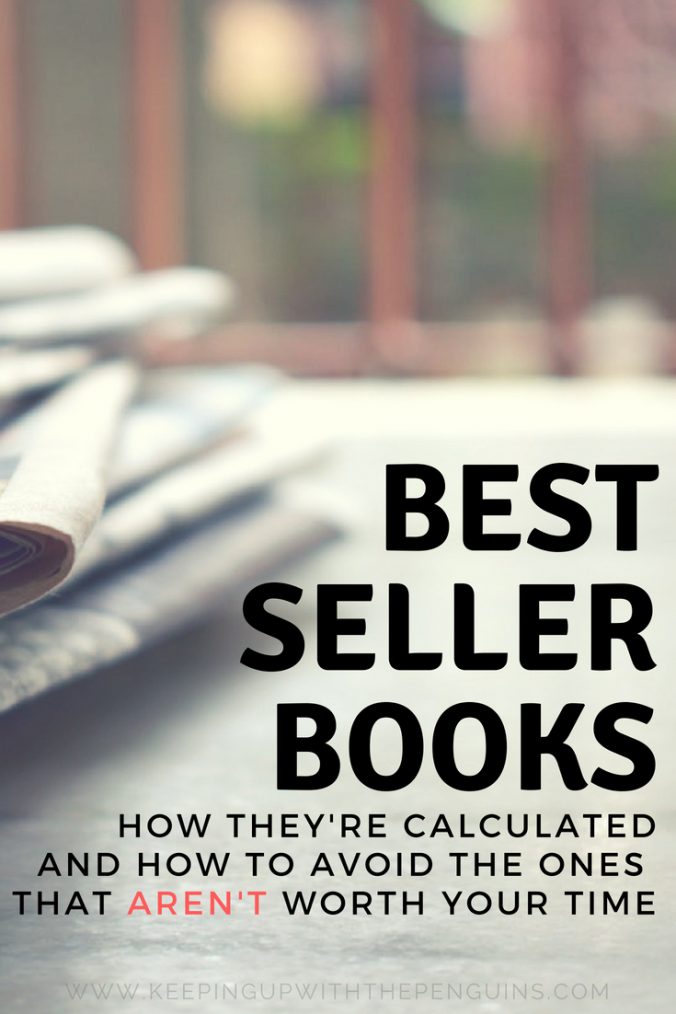 This week, I reviewed American Sniper (not a fan). I found myself bewildered as to how such a terribly written book could become a “#1 Best Seller”. I felt sad for everyone who picked up a copy thinking that meant it would be a terrific read. This got me to thinking: what makes a “best seller”? How can you avoid the best sellers that aren’t worth your time?

What Is A “Best Seller”?

The term “best seller” was first used in The Kansas Times & Star back in 1889, but the idea has been around basically as long as books have been mass-produced. The phrase is generally understood to indicate a book that has sold more than others over a given period (or is more frequently borrowed, don’t forget about your local library!).

Lists of these “best sellers” are published by various newspapers, magazines, and book-stores, the most widely-recognised ones being Publishers Weekly, the Washington Post, Amazon.com, and – of course – the New York Times (more on that one in a minute). Best seller lists are usually divided into categories – popular fiction, non-fiction, cookbooks, and so on – to make sure you’re not comparing apples and oranges.

The most important thing to understand is that the term “best seller” is associated only with copies sold or borrowed, so it has nothing to do with the book has academic or literary merit. As such, it is used very loosely by book publicists and publishers. They know that a book with “best seller” printed on the cover will (funnily enough) sell more copies than a book that is advertised as simply being “really good”. That’s the power of social proof for ya!

How Are Best Sellers Calculated?

It depends on the list, who publishes it, and why. Usually, best seller lists rely on sales data over a specific period – maybe a week, a month, or a year.

That’s a super-important factor, because the sales period is really the main determining factor in a book’s rank (or, indeed, whether a book appears at all). A classic book (like, say, Moby Dick) might sell way more books over a period of fifty years than a current book (like, say, Still Alice), but guess which one is going to make a best seller list calculated on a specific week of 2007?

Plus, think about what happens to books the week that the movie adaptation is released. People see ads for the movie, decide to buy the book before they see it, and all of a sudden – for just one or two weeks – a book that is 5-10 years old (or older!) is back on top of the list.

To put it another way: if best seller lists covered total sales from all time, The Bible would be in the number one spot every week.

Another really important factor in determining whether a book is a “best seller” is the category into which it is placed. The New York Times famously created a separate “Children’s Books” list in 2001, because Harry Potter had dominated the first, second, and third places in their fiction list for so long.

If the categories are narrow or niche (“21st century female memoir”, “children’s books by Australian authors”, “Young Adult fantasy hardcovers”), a book doesn’t have to sell all that many copies to make it to the top. If, on the other hand, the categories are really broad (“fiction” and “non-fiction”), the book would have to go like the clappers to even get a look-in at the top ten.

What all this means is that, while the number of copies sold does “count” in calculating whether a book is a “best seller”, it’s not the only factor (and it’s definitely not the most important factor). There’s a tonne of other things that go into these calculations, too: whether the book is hardcover or paperback, whether its sales are wholesale to book chains or private orders for independent bookstores or online orders, whether the author has previously had a best seller…

As complicated as it sounds, people have still found ways to game the system (of course). In 1995, the authors of The Discipline of Market Leaders personally ordered 10,000 copies of their own book through small bookstores that they knew were influential in the calculation of best seller figures. It worked, believe it or not: they made the top 10 in a bunch of the lists, and the authors laughed all the way to the bank.

The most widely-recognised list of all – the New York Times Best Seller List – remains a bit of a mystery. It’s been going since 1931, published each week in The New York Times Book Review. The exact method used to compile this particular list is literally a classified trade secret. As best we can tell, it’s based on weekly sales reports from selected independent and chain bookstores in the U.S., but no one really knows for sure. The secrecy is designed to prevent people from rigging the system (authors of The Discipline of Market Leaders, we’re looking at you!), but it also means that readers – like you and I – can’t really evaluate the value of its recommendations, because we don’t know where they come from.

For as long as there have been best seller lists, there have been criticisms of them, and they all boil down to pretty much the same thing: best seller lists can’t be relied upon to tell us which books are worthwhile. A classic book will always outsell this week’s flash-in-a-pan garbage celebrity memoir over time, but that’s not going to be reflected in a list that only takes this week or this month into account. Some lists are prone to double-counting, because they take into account both wholesale and retail sales, which gives us a false sense of how many people are buying and enjoying those books. And, most worryingly, there will always be authors and publishers that try to game the system, and the reader will (almost) never know when that has happened.

So, ultimately, the message is this: take best seller lists with a grain of salt. All they can really tell us is which books sold a lot of copies over a given period of time, and even then they can’t do that 100% accurately.