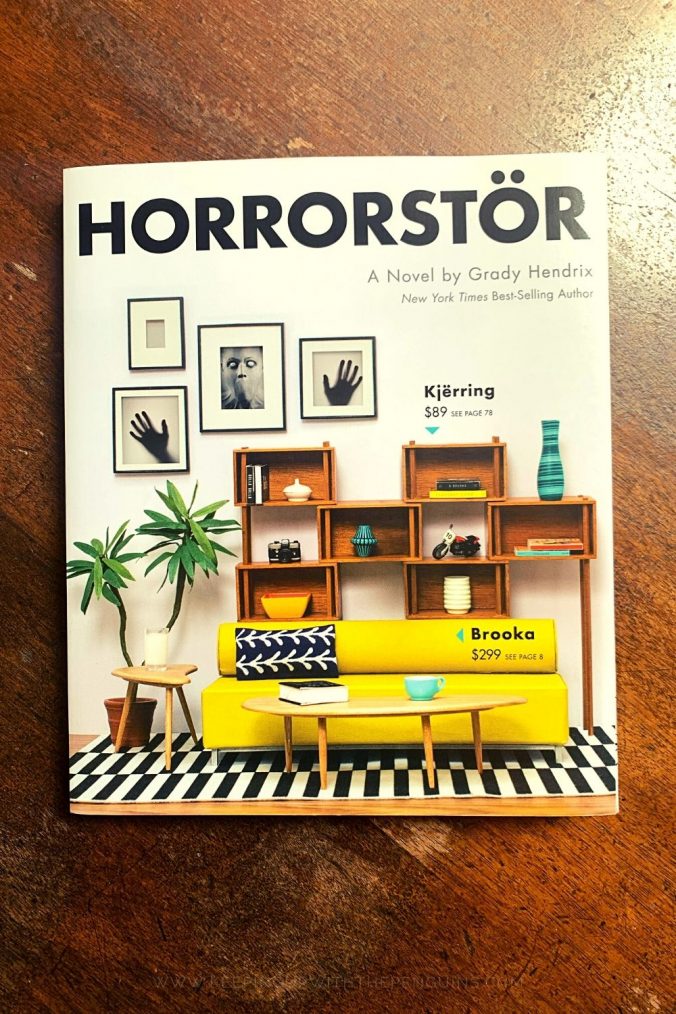 Setting aside any regards for its contents, Horrorstor gets five stars for book design, alone. Look at it! It’s formatted to look like an IKEA catalogue, complete with an order form for a copyright page and product descriptions for chapter headers. It’s honestly one of the most beautiful tomes I’ve ever had the privilege of placing on my shelves.

Okay, okay, I’ll stop gushing. Horrorstor is a 2014 horror-comedy novel by pop-culture journalist and pulp-fiction enthusiast Grady Hendrix. The concept is enough to make you laugh and shiver at the same time. Basically, it boils down to this: haunted IKEA. Freaky, right?

The story is set in Orsk, a furniture superstore clearly (but not officially, not at all) based on the Swedish conglomerate. Something is up in this shop, let me tell you: broken glass, soiled couches, strange graffiti… all of it appearing overnight, with no culprit in sight.

Amy is a cynical but hardworking Orsk employee, disillusioned by what she sees as a dead-end job but eager not to get herself fired all the same. Her boss, Basil, on the other hand has definitely drunk the Orsk Kool-Aid. He hand-picks Amy, and Ruth Anne (another Orsk employee whose work ethic more closely resembles Basil’s own), to stay with him in the store overnight and see if they can catch the vandals before a big inspection by their corporate overlords.

Trinity and Matt, two other Orsk employees, had the same idea… only they didn’t bother to get it sanctioned by the higher-ups. On one of their patrols, Amy and Ruth Anne discover Trinity and Matt also searching the store, but they’re looking for ghosts. And they’ve got cameras. They think there’s a haunting at Orsk, and if they capture video proof, they reckon they’ll get their own ghost-hunting TV show.

What could go wrong?

Back to the design for just a second: as Horrorstor gets progressively eerie, so too do the product descriptions that lead each chapter. They start out as innocuous pieces of furniture – a chair, a table, whatever – and gradually become more sinister as the Orsk haunting reveals itself. I mean, isn’t that brilliant?

Anyway, Horrorstor is surprisingly scary and gruesome. You’ll never be able to shop at IKEA again without a chill running down your spine (if you ever could before, that is). Hendrix totally nails the tone, the disconcerting sense of disorientation that overtakes us whenever we cross the threshold of one of those places. The discordant orderliness, the stale air… all of it makes for the perfect backdrop of a contemporary ghost story.

It’s silly to try and give trigger warnings for a horror novel, but what I will offer is this: if you’re claustrophobic, or squeamish about rats, sadly you might want to give Horrorstor a miss.

But it’s not all schlocky spooks and jump-scares. This story has hidden depths. Horrorstor mines the mind-fuck of consumerism and late-stage capitalism to fuel your nightmares. Hendrix draws our attention to the ways in which we are manipulated in retail environments, and the sinister truth behind the “daily grind”.

I particularly liked the epilogue. Hendrix doesn’t shy away from the psychological fall-out of a significant trauma like the one Amy experiences in Horrorstor, but he also ends our heroine’s journey on a note of agency and empowerment. It manages to be both truthful and hopeful, a fitting end to a very clever story. If you want a horror read with a well-developed female protagonist – written by a man, no less! – Horrorstor is the money.

In this age of blockbuster action flicks, I’m completely baffled that Horrorstor hasn’t been made into a film as yet. It’s one of the very few movies I’d actually consider paying to see in a cinema, to get the full effect of the superstore setting. Apparently, rights have been optioned by New Republic Pictures, but no word as yet as to when it will be coming to a theater near us.

In the meantime, I immediately want to read Horrorstor again – for the story, for the satirical winks I might’ve missed the first time around, for that brilliant book design that I can’t stop banging on about. I also have an equal and competing compulsion to read everything else Hendrix has ever written. I definitely highly recommend this one, and stay tuned for my thoughts on the others.

My favourite Amazon reviews of Horrorstor: