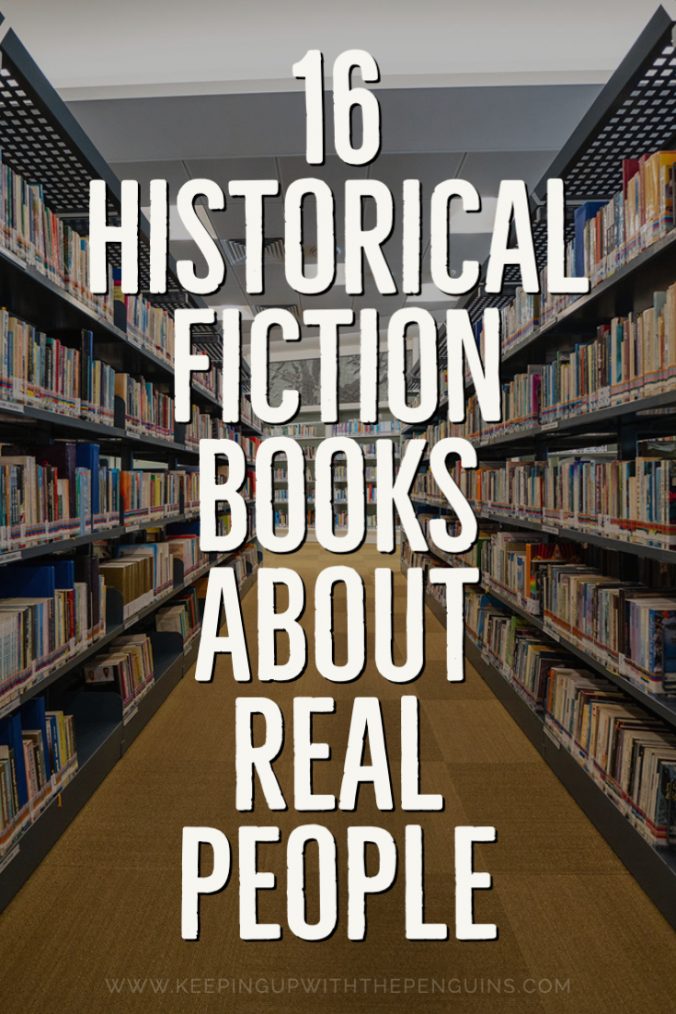 The Tattooist Of Auschwitz by Heather Morris

Heather Morris’s debut novel, The Tattooist Of Auschwitz, is based on the real-life stories of Lale Sokolov. Sokolov met his wife, Gita, in Auschwitz, and they managed – against all odds – to survive and start a life together after the end of WWII. Morris’s fictionalised Sokolov meets his future wife when he tattoos her identification number onto her arm when she is first imprisoned in Auschwitz II-Birkenau. This Holocaust fiction novel has been controversial, with experts questioning the accuracy of elements in Morris’s story and others defending her use of creative license. Wherever you land in the debate, there’s no doubt that as far as historical fiction books about real people go, this is an interesting one.

There are real people everywhere you look in Hilary Mantel’s Booker Prize-winning Wolf Hall, the first in a trilogy of Tudor historical fiction novels. It’s a condensed fictionalised biography of Thomas Cromwell, a key player in the rise and reign of Henry VIII. Mantel has said that she spent five years researching Cromwell’s life and the Tudor period, making sure that her fictional account matched the historical record. Her focus was on putting the reader in the time and place, hopefully losing the judgemental lens of hindsight. Cromwell is a particularly interesting real person on whom to base a historical fiction novel, given his modest beginnings and his meteoric rise.

A Brief History Of Seven Killings by Marlon James

Speaking of Booker Prize-winning historical fiction books about real people: Marlon James’s Booker Prize-winning novel A Brief History Of Seven Killings revolves around the true story of the 1976 attempted assassination of Jamaican musician Bob Marley. Just two days before he was set to play at the Smile Jamaica Festival, a band-aid on the wounds of recent political violence in the country, seven armed men raided Marley’s home and opened fire. Through this series of events, James weaves in a much deeper history of a country on the precipice.

Alias Grace is Margaret Atwood’s fictionalised account of the real life and alleged crimes of Grace Marks, once considered Canada’s most celebrated murderess. Marks and another servant from her household, James McDermott, were tried and convicted of the 1843 murders of the householder Thomas Kinnear and his housekeeper (slash secret lover) Nancy Montgomery. McDermott was sentenced to death and hanged, while Marks’s death sentence was commuted. Was she actually guilty, or was she wrongfully imprisoned? Atwood doesn’t necessarily answer the obvious question, but it’s still a really fascinating read. Read my full review of Alias Grace here.

The Other Boleyn Girl by Philippa Gregory

Philippa Gregory has a PhD in 18th century literature. She’s written a number of historical romance novels, but The Other Boleyn Girl is the one for which she’s best known. It’s a semi-speculative historical romance, which posits that Henry VIII originally fell in love with then-14-year-old Mary Boleyn before famously divorcing his wife, and England from the Vatican, to marry her older sister Anne. Yes, Mary Boleyn was a real person, but disturbingly little is known about her today. Gregory has taken it upon herself to fill in the gaps. Read my full review of The Other Boleyn Girl here.

See What I Have Done by Sarah Schmidt

We all know the rhyme, don’t we? Lizzie Borden took an axe / and gave her mother forty whacks / When she saw what she had done / she gave her father forty-one. It’s based on the real life murder of Lizzie Borden’s parents, but what if there’s more to the story? That’s what Sarah Schmidt explores in See What I Have Done, her fictional account of what really happened in the Borden household prior to the murders. From multiple perspectives, she interrogates all of the differing accounts of what “really” happened that day, echoing the real confusion as to Borden’s guilt that has persisted over decades.

True History Of The Kelly Gang by Peter Carey

There’s a certain delicious defiance in calling historical fiction books about real people “true history”s, don’t you think? It’s especially so in the case of True History Of The Kelly Gang by Peter Carey. It’s a fictional story based rather loosely on the life of renowned bush-ranger Ned Kelly and his gang. He positions it as an autobiography, written in Kelly’s own hand; he modelled the dialect style off the most famous surviving piece of Ned Kelly’s own writing, The Jerilderie letter. You certainly can’t fault his attention to detail – which makes his generous use of the ol’ creative license easily forgivable. Read my full review of True History Of The Kelly Gang here.

Lincoln In The Bardo by George Saunders

Beloved American president Abraham Lincoln had a rough trot in many respects – but one of the roughest patches came after the death of his son, William “Willie” Wallace Lincoln. Willie was just 11 years old when he died of typhoid fever, at the White House no less, during his father’s presidency. George Saunders, noted American short story writer, heard a story about how President Lincoln used to visit Willie’s crypt at Oak Hill Cemetery to reportedly hold his son’s body, and it proved a spark of inspiration. His first full-length novel, Lincoln In The Bardo, is an experimental exploration of grief, death, and perspective, inspired by these real, tragic events.

The Swans Of Fifth Avenue by Melanie Benjamin

Whenever I find a book I really love, I find myself becoming curious about the author’s life off the page. That’s what drew me to The Swans Of Fifth Avenue, a historical fiction novel about the real life of author Truman Capote. Benjamin tells the story of how he infiltrated, and then betrayed, the socialites of Manhattan’s upper-est echelons. After the riotous success of In Cold Blood, he found himself in need of a story, so he befriended the Ladies Who Lunch and then used their lives as fodder. Yes, that really happened, and Benjamin wrote a novel about it! Read my full review of The Swans Of Fifth Avenue here.

A Room Made Of Leaves by Kate Grenville

I don’t tend to read a lot of Australian historical fiction, mostly because I resent the wistful, whitewashed, romantic versions of our colonial past that it tends to present, but A Room Made Of Leaves is something special. It’s an entirely-believable imagined memoir of a real woman, Elizabeth Macarthur (1766-1850), the wife of wool baron John Macarthur, whom history has all but erased. Grenville dedicates it “to all those whose stories have been silenced”, and it speaks to those gaps in the archive – a work of historical fiction for the #metoo era. Read my full review of A Room Made Of Leaves here.

Decades after her death, Norma Jeane Baker – alias Marilyn Monroe – remains the subject of public fascination and scrutiny. While much attention is paid to her roles as actress and “sex symbol”, Joyce Carol Oates took a closer look at the ugly truths of her life in Blonde. Oates stresses that this is a fictionalised account of Monroe’s life, but it’s one that will unsettle you and force you to look at the syrupy starlet very differently. As far as historical fiction books about real people go, this one is particularly shocking and revelatory and brilliant. (And Elena Ferrante highly recommends it!)

John Wilkes Booth is one of the most infamous men in American history, responsible for the assassination of one of the country’s most beloved presidents, abolitionist Abraham Lincoln. Much has been written about him, but Karen Joy Fowler’s recent take is undoubtedly one of the most fascinating historical fiction books about real people I’ve ever read. Booth is not just a story about John Wilkes Booth: it’s the story of his whole, weird, super-dramatic family, and the whole, weird, super-dramatic times they lived in. Part-family saga, part-psychological interrogation, Booth is a must-read for fans of Hamilton. Read my full review of Booth here.

The Hours by Michael Cunningham

I’m pretty sure if you lined up every book written about Virginia Woolf, the line would circle the Earth twice (or something equally ridiculous). Her likeness appears frequently in historical fiction books about real people, because she’s a fascinating figure (and we have a grotesque interest in dark, brilliant women who meet sad ends). One of the better treatments of Woolf’s life I’ve read is that found in The Hours, the Pulitzer Prize-winning novel by Michael Cunningham. Woolf is one of three protagonists, three women whose lives are touched in some way or another by Woolf’s novel Mrs Dalloway. It’s a sad read, but a beautiful one. Read my full review of The Hours here.

Agnes Magnúsdóttir might not be a household name, but she still occupies an important place in world history: she was the last woman to be executed in Iceland, beheaded by axe in 1830. She’s slightly better known now than she was in the past (a particularly positive result of historical fiction books about real people), thanks to Hannah Kent’s book Burial Rites. The truth of what Agnes did at Ketilsson’s farm is blurred and lost to time, but it would appear that a series of romantic entanglements led to her and two accomplices stabbing and bludgeoning two people to death, and attempting to cover the crime with a fire.

At The Wolf’s Table by Rosella Postorino

Rosella Postorino’s historical fiction novel At The Wolf’s Table was inspired by Margot Wölk, a woman who didn’t reveal until very late in her life that she had been one of Hitler’s food tasters. Her (truly rotten, awful, no-good) job was to sample the genocidal dictator’s meal before he ate it, to test whether it had been poisoned or otherwise tampered with. Sadly, Wölk passed soon after revealing the truth of her role as Hitler’s food taster, so we have lost the opportunity to learn more about what that life was like, but we can be glad that Postorino has found a way to tell a version of her story to the world.

Sometimes, historical fiction books about real people merge with the speculative to produce really interesting results. One of the best examples is Rodham, Curtis Sittenfeld’s version of what might have happened if Hilary Clinton had never married Bill and forged her own path. It’s a “what might have been” alternative history, one that is full to the brim with gossip and scandal. Oprah called it “a deviously clever what-if”, and both the New Yorker and NPR named it one of the best books of 2020.