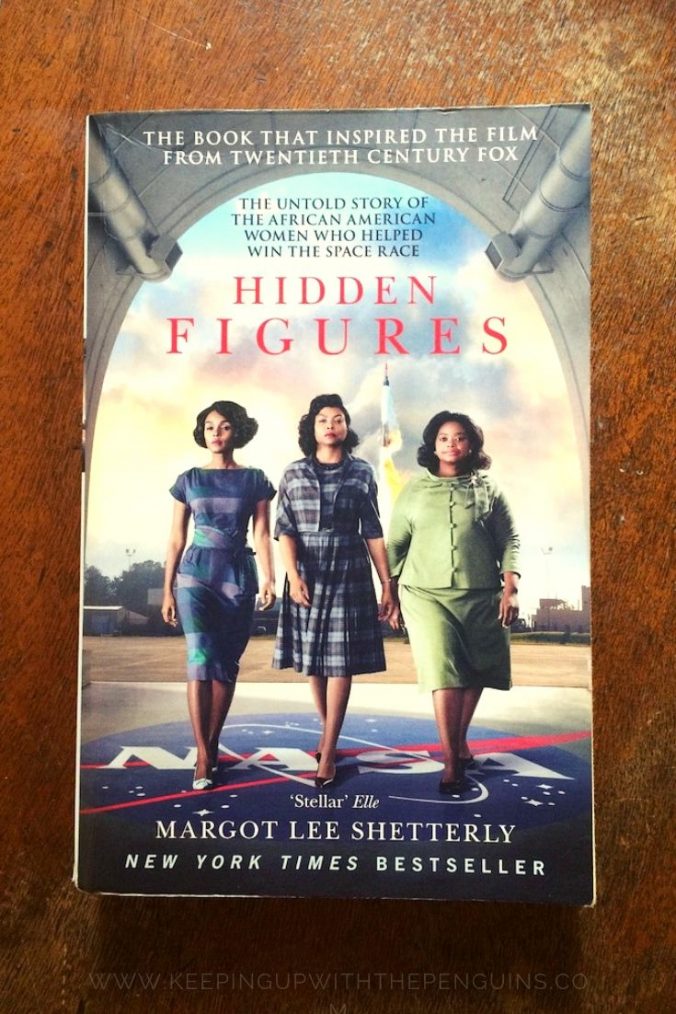 Hidden Figures is one of those (true!) stories that you immediately want to know more about. As per the blurb, it’s “the phenomenal true story of the black female mathematicians at NASA whose calculations helped fuel some of America’s greatest achievements in space,”. Margot Lee Shetterly spent years learning about the ‘human computers’ who worked with paper and pencil to put man on the moon, and shared all she had learned about them in her 2016 non-fiction best-seller.

Of course, by examining the roles these women played at NASA, Shetterly incidentally traces American history through WWII, the Cold War, and the space race. Hidden Figures highlights the particular barriers for black women in the sciences as well as society at large, from the late 1930s through to the 1960s. She offers a kind note at the beginning of the book about being faithful to that period, with regard to the use of epithets and pejoratives – it was nice to have a heads up, but honestly, that note made it sound worse than the actual text bore out.

The first surprise of Hidden Figures was just how many black women worked as mathematicians and scientists at NASA. There weren’t just a handful of them – there were dozens and dozens.

Many numbers of black women have participated as protagonists in the epic of America.

What’s more, Shetterly herself knew many of these women. Her father worked with them so she grew up around them, and she took for granted their roles at NASA, the way children do. “Growing up in Hampton [Virginia], the face of science was brown like mine,” she says (page xiii). This is ‘see it to be it’ in action.

As Shetterly describes it, when these women took jobs as ‘computers’ during WWII labour shortages, workplaces in Virginia were still segregated and the women – especially the black women – were kept at arm’s length. Still, most of them were grateful to have meaningful work (with the dark days of the Depression not so far behind them, and many of them supporting themselves and their children), and NASA paid handsomely for the time.

Gradually, the utility of the women began to outweigh the entrenched (at times, government-mandated) racism and sexism, and by the time Apollo 11 was preparing for launch, they were working in essential roles at the highest levels.

This is all fascinating, of course. Unfortunately, Hidden Figures itself is hard to penetrate. The story is told largely in the historical abstract, with a lot of unnecessary “context” (i.e., extraneous detail). The voice is very detached from the women supposedly at the heart of the story. The rare glimpses Shetterly offers into their personalities and private lives are the most engaging and interesting parts of Hidden Figures. On the whole, though, it’s a disappointingly dry read.

Don’t get me wrong: it should be a good story! It’s just not told in a compelling or engaging way in this particular book. Perhaps more dialogue – interviews with the women themselves, conversations with their co-workers or children – might have made the story more moving, or at least tangible. As it stands, I feel like I just read a Wikipedia entry about them. I think Shetterly was more committed to stating facts for the record than telling a story. That works fine in some formats (see above, Wikipedia entry), but not in Hidden Figures.

I’ve not yet seen the film adaptation, but I’d imagine it would be a much better format for telling this story. Allowing us to engage with the women – even just a few of them – on a human level, ‘put faces to names’, will make the story of Hidden Figures sparkle the way that it should.

American, Books Made Into Movies, Non-Fiction

A Not So Meet Cute – Meghan Quinn