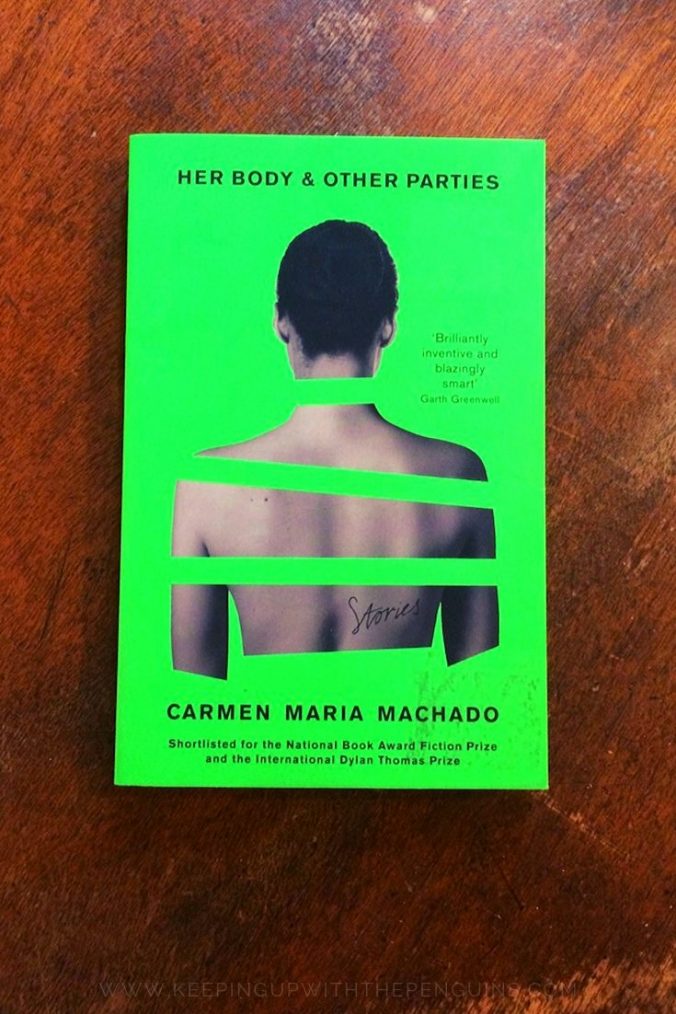 Her Body And Other Parties – Carmen Maria Machado

I first encountered Carmen Maria Machado through the Sydney Writers’ Festival podcast (specifically through her lecture – which seems to have mysteriously disappeared from the internet, otherwise I’d link to it directly – about Law & Order: SVU). I’d not encountered her work before, which wasn’t entirely surprising. She didn’t have a particularly long publishing history at that time, just one short story collection: Her Body And Other Parties. Now, it’s truly phenomenal that a book of short stories from a debut author received enough attention to earn her an invite to speak at a festival half-way around the world, but I think it’s more than Machado’s brilliant writing craft that got her to that point. She is completely beguiling, scarily smart, and almost-embarrassingly frank. This short story collection is like nothing I’ve ever read before.

Her Body And Other Parties is a collection of eight short stories, all wildly different. Machado ricochets from magical realism to horror to science fiction to comedy to fantasy to epistolary, so fast that the genres and tropes are pureed together into a very delicious pulp. As much as the stories vary, they make sense next to each other, forming a complete and cohesive collection that somehow leaves you (selfishly) wanting more. The stories aren’t linked by character or plot or even style, but they all address similar themes: sex, death, queerness, vulnerability, women, and their bodies (as the title might suggest).

The first story of the collection is possibly Machado’s best-known work: The Husband Stitch. It’s a reimagination of an old and oft-retold spooky story (borrowed from a French folktale of unknown origin) The Green Ribbon. You know the one, the woman who marries a man but won’t tell him why she always wears a green ribbon around her neck, until she finally lets him remove it and her head falls off? The thrust of Machado’s version is much the same: basically, we screw women over by denying them self-determination. It’s one heck of an opener, and it really sets the tone for the rest of Her Body And Other Parties. Even the new title is revealing in its gruesomeness (steel yourselves): the “husband stitch” is a euphemism for doctors using more sutures than necessary to repair a woman’s perineum after childbirth, purportedly to make the vaginal opening smaller and sexual penetration more “pleasurable” for her male partner. (Excuse me, I have to go and vomit.)


Another one of the stories that received a lot of attention was Especially Heinous (and it’s probably the reason she was invited to give that lecture at the Sydney Writers’ Festival to begin with). Essentially, it’s a novella-length story told through imagined plot summaries of a parallel-universe series of Law & Order: SVU. It sounds bizarre, and it is. Machado had the idea after she streamed endless seasons of the show while recovering from surgery, which is what lends Especially Heinous its surreal, feverish quality. Plus, it’s a very obvious but still very poignant critique of our culture’s obsession with violence that victimises women. To call it “twisted literary fan fiction” would be underselling it, but it’s a really hard premise to describe, so give me a break!

“VULNERABLE”: For three days in a row, there is not a single victim in the entire precinct. No rapes. No murders. No rape-murders. No kidnappings. No child pornography made, bought, or sold. No molestations. No sexual assaults. No sexual harassments. No forced prostitution. No human trafficking. No subway gropings. No incest. No indecent exposures. No stalking. Not even an unwanted dirty phone call. Then, in the gloaming of a Wednesday, a man wolf-whistles at a woman on her way to an AA meeting. The whole city releases its long-held breath, and everything returns to normal.

Especially heinous, her body and other parties (P. 80)

My personal favourite of the collection (though, of course, they’re all worth reading) is Inventory. What looks like a simple list of a woman’s lovers turns into an incredible work of speculative fiction, set in a dystopian world where a virus is killing off the population in swathes. You might think I’ve spoiled it for you now, but I swear I haven’t: it would take a lot more than a single review on a book blog to ruin all of the surprises that Machado has in store for you.


It should be fairly obvious by now, but just in case it isn’t: the stories in Her Body And Other Parties are “dirty”. Like, would-make-you-blush-if-you-read-them-out-loud-to-your-mother “dirty”. The main characters of The Husband Stitch fuck, in graphic detail, twice within the first five pages. Machado is not bashful or coy about sex – my kind of girl! I only mention it because I know that’s not for everyone, but I still want to vouch for the book (even if “smut” isn’t your “thing”). The sex isn’t pointless titillating garbage, it’s integral to the story (as it is to life), and I think even the pearl-clutchers among us will at least admire Machado’s erotic fearlessness.

Also needless to say: Her Body And Other Parties went on to win a lot of awards. A lot. Like, I got exhausted trying to collate them into a list. Every professional review I read was glowing, at minimum (I think they call that “critical acclaim”). Plus, more importantly, in my view, it’s achieved cult status – this is a book that will be passed from youth to youth, on university campuses and at seedy bars and over cheap coffees, for years to come. Machado is the real deal, folks, and I’m going to be overjoyed to be able to say “I remember reading her very first book” late in her long, long career. She’s already on her way, having released a breathtaking memoir – In The Dream House – which has revolutionised the genre and already cemented itself a place in the queer literary canon. Do I recommend Her Body And Other Parties? Abso-fucking-lutely.


My favourite Amazon reviews of Her Body And Other Parties:

All The Books We Should Have Read: A Book Blogger Round Up