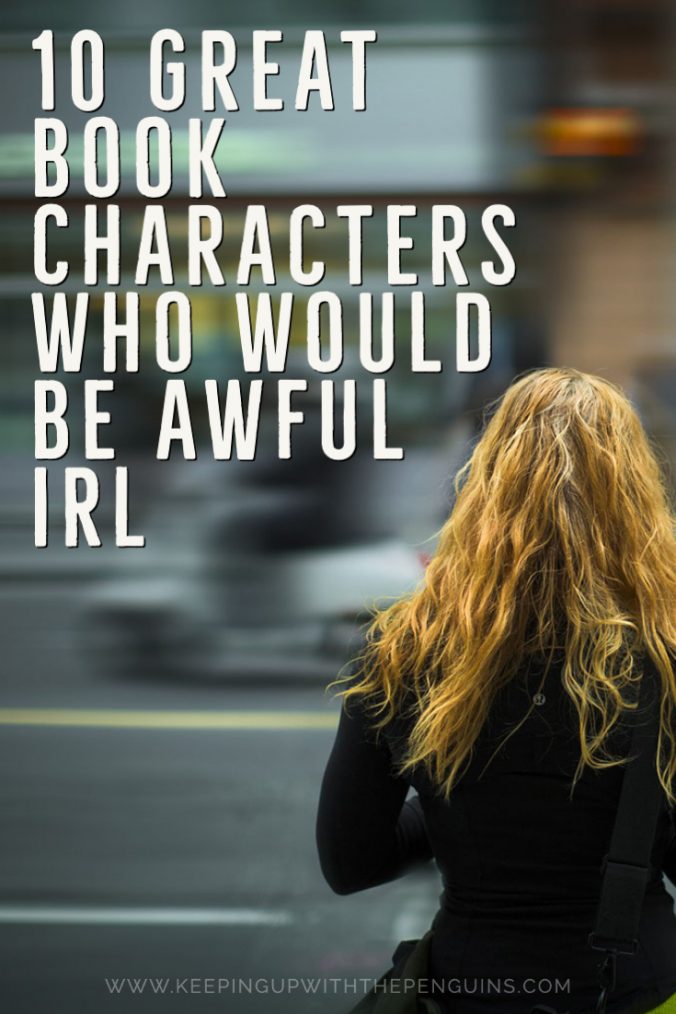 10 Great Book Characters Who Would Be Awful IRL

From Madame Bovary by Gustave Flaubert

Emma, from Madame Bovary, was one of the first classic book characters that truly spoke to me. Despite doing all the “right” things, she found herself trapped in a suffocating domestic situation in a small town with nothing to entertain her brilliant mind. What’s a girl to do? Scorch the earth, of course! She drinks whiskey and kicks up her skirt and embarrasses her long-suffering husband, and damn if she doesn’t have fun doing it. Well, it’s fun on paper, but I’d imagine it would be quite tiring in person. You might have a good night drinking with Emma, but the hungover post-mortem of her marriage and her choices would be painful.

From The Devil Wears Prada by Lauren Weisberger

Miranda Priestly has to be one of the most notorious villains of contemporary popular fiction. Rumoured to be based on the real-world Editor In Chief of Vogue (and Weisberger’s former boss) Anna Wintour, Miranda has become synonymous with cold ambition and exploitation of subordinates. Throughout The Devil Wears Prada, she’s captivating and fascinating to read, but holy heck – I’d sooner pluck my own eyeballs out with a fork, and then eat them with that same fork, than work for her. All the Prada and Hermes in the world couldn’t compensate for that much emotional labour.

From Jane Eyre by Charlotte Brontë

I’ve already confessed my feminist sin elsewhere: I find Jane Eyre‘s Mr Rochester very hot. My heart goes all aflutter as his and Jane’s romance unfolds. But even I can see that he is an irredeemably problematic fave. There’s the wife that he’s keeping prisoner in the attic. There’s his sexual harassment of an employee (which definitely doesn’t hold up in the post-#MeToo era). When all of it finally catches up with him, he doesn’t even have a moment of reckoning and self-reflection; he just sits in his lounge chair and cries about it until Jane comes to mop up his tears. I don’t have time for all the real ridiculous man-children in the world, let alone fictional ones. Read my full review of Jane Eyre here.

From Less by Andrew Sean Greer

Greer said that he began writing Less as a “very serious” novel, but he soon figured out that the only way to write about the miseries of an ageing, gay writer (as an ageing, gay writer) was to make it funny. I think that’s the key, that’s what makes Less work. Arthur Less is so lovelorn, so self-pitying, such a sad sack, that it would not have worked if told from his own point of view. It would have been morose and miserable and flat-out annoying, as Arthur Less would be IRL. Luckily, Greer is very aware of this, to the point that one of the other characters even points out to Arthur’s face how insufferable he is. Read my full review of Less here.

From Portnoy’s Complaint by Philip Roth

I really didn’t expect to like Portnoy’s Complaint. The blurb described it as a “humorous monologue of a lust-ridden, mother-addicted young Jewish bachelor”, and as much as I love a smutty read, normally middle-aged bachelors don’t write them well enough to make them anything better than so-bad-it’s-funny. Roth upended my expectations with Alexander Portnoy, a character so delightfully self-indulgent, so lacking in self-awareness, that he is truly fantastic to read. Still, I can’t help but feel sorry for his poor therapist, who doesn’t get a word in edgewise until the novel’s final page. Can you imagine having to sit through a description of your interlocutor’s teen misadventure masturbating with a liver, and not being able to say anything? Read my full review of Portnoy’s Complaint here.

Of course, Lena Headey brought the magnificent evil of Cersei Lannister to our small screens in the HBO adaptation and practically made her a household name, but let me tell you: the Cersei Lannister from the A Game Of Thrones book was no picnic, either! She’s your textbook beautiful evil queen, with a heaping serve of twin-brother-love on the side (yes, ew, we know). She’s fascinating to watch and to read, some small part of you might even secretly be cheering “Yars, Queen!”, but I’d bet none of us would ever want to be on the receiving end of her vengeful wrath. Read my full review of A Game Of Thrones here.

From The Catcher In The Rye by J.D. Salinger

Holden Caulfield is your angsty teen prototype. He’s all mad because life is just too hard (at the ripe old age of sixteen years), and figures he’ll “rebel” by running away from school and drinking at every Manhattan bar with a lax door policy. Yes, okay, fine, I’m reducing his character a bit, but my point remains! I actually enjoyed The Catcher In The Rye and I can see why it speaks to ThE yOuTh Of ToDaY, but Holden is a pain in the arse (or, he would be, if you had the misfortune to befriend him in real life). There is no way I would be able to tolerate the combination of his whingeing and his naiveté. Read my full review of The Catcher In The Rye here.

From My Year Of Rest And Relaxation by Ottessa Moshfegh

The nameless narrator of My Year Of Rest And Relaxation has just about every infuriating trait you can imagine. She’s beautiful, and terribly aware of it. She’s wealthy, and does nothing to benefit others. She’s self-indulgent and lazy (see: actually bringing her fantasy of sleeping for a full year to life). She’s awful to her (only) friend Reva. She harasses a “boyfriend” who clearly has no interest in her. She takes a shit on the floor of a former employer to show them just how right they were to get rid of her. I would sooner throw up in my mouth – and swallow it! – than spend ten minutes in her company… but damn, if she isn’t one of the most compulsively readable characters I’ve ever encountered in fiction.

The Second Mrs De Winter (a.k.a. The Original What’s-her-face)

From Rebecca by Daphne du Maurier

Who knew that impulsively marrying a wealthy widower who’s haunted by his dead wife was a bad idea? Not the unnamed narrator of Rebecca, that’s for sure! This girl is so hopelessly neurotic, so incredibly naive, it’s truly baffling. She winds up in a house with her husband’s dead ex around every corner, the household staff won’t tell her where to find a bathroom, and she flits from room to room simply feeling sorry for herself instead of just bloody doing something about it. She’ll give you intense “shit, or get off the pot, lady!” feels, but most of the time that’s what makes for a good Gothic read, anyway. Read my full review of Rebecca here.

From Lolita by Vladimir Nabokov

If you really need me to explain this one, I can’t help you. The man marries a woman to get to her daughter, whom he proceeds to kidnap and sexually abuse for years. Lolita is beautifully written, Nabokov is a genius, but… *shudders*.

The Other Boleyn Girl – Philippa Gregory