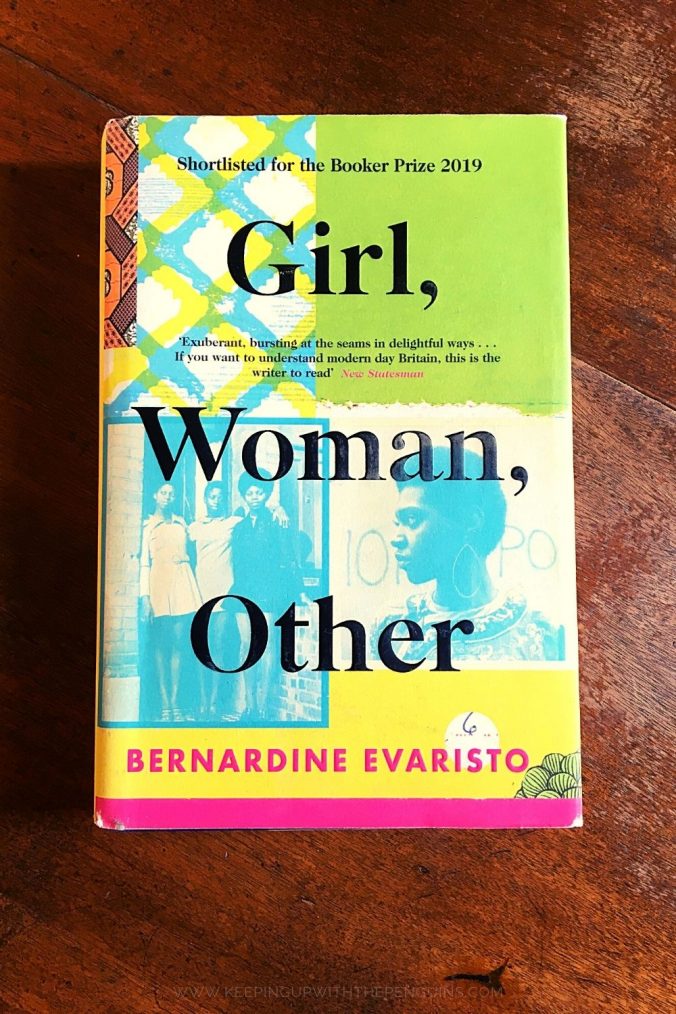 Girl, Woman, Other is Bernardine Evaristo’s eighth novel, her “break-out” novel, the one that catapulted her to international fame. It tells the stories of twelve people – “mostly women, mostly black” – who live in Britain and vary greatly in circumstances. It’s not a linear narrative, more like a series of connected biographical vignettes that span decades and multiple geographies.

Each “episode” in Girl, Woman, Other is connected to another in some way, Love Actually-style. Some of the characters are mother/daughter pairs, some are friends, some don’t even realise that they’re connected. It can be a little tricky to keep it all straight if you’re reading the book in stolen moments, so I’ve made one of my trademark character maps. Note that this only shows the major relationships between characters, not the incidental acquaintances (e.g., Bummi is briefly employed as Penelope’s cleaner, and Yazz follows Morgan on Twitter) – the complexity of a complete map is beyond even my powers.

Evaristo’s oeuvre explores all facets of the African diaspora, and Girl, Woman, Other is no exception. The characters are well-fleshed out, but they’re also undeniably devices to discuss the intersectionality of racism, sexism, feminism, and all the other -isms that impact the lives of black women. Each character faces their own unique challenges, fighting their way up from under the covers of colonialism, politics, poverty, and patriarchy. The “other” of the title doesn’t just allude to the non-binary expression of gender (personified in Morgan’s character), but also the ways in which the characters “other” each other. “I might be a woman, but I’m not one of those women”, “I might be black, but I’m not one of those black people”, so on and so forth.

Evaristo uses very strange line breaks (though perhaps not that strange, given her history of writing verse novels) to emphasise and elucidate her points. It’s not quite prose as you know it, but it’s not poetry either. She doesn’t seem to use any strict formula for grammar, punctuation, or formatting. Normally, I’d find this super-annoying, but in Girl, Woman, Other I barely noticed. It was surprisingly readable, and all of the stories flowed very naturally. So, if that’s normally your bug-bear, you needn’t worry.

Now, I can’t not mention the Booker Prize controversy. Evaristo was the co-winner of the 2019 Booker Prize, sharing it with Margaret Atwood (for The Testaments). The Booker Prize overlords had implemented a rule, back in the ’90s, that was supposed to prevent the judges from splitting the prize… but that year, the judges flipped the bird and did it anyway. It might not have been such a big deal if Evaristo wasn’t the first black woman to win the Booker (in fact, only four black women had even been shortlisted in the award’s history, prior to Evaristo’s win). Splitting the prize, and the controversy it invited, detracted from that milestone – and Evaristo had to split the cash, into the bargain. Still, perhaps it worked out well in the sense that the controversy had everyone talking about Evaristo and her work for a year, where otherwise her win might have been briefly exciting and then fallen from the headlines.

And besides, Girl, Woman, Other attracted plenty of other attention all on its own. It received over 30 Book Of The Year/Decade honours, and Barack Obama picked it as one of his best reads of the year. You might think that’s too much hype for any one book to withstand, but I’m here to tell you that it totally holds up. Girl, Woman, Other is a strange book (and thus, difficult to review), but if you take anything away from this little ramble, I hope it’s that Girl, Woman, Other is well worth a read.

My favourite Amazon reviews of Girl, Woman, Other:

The Other Side Of Beautiful – Kim Lock