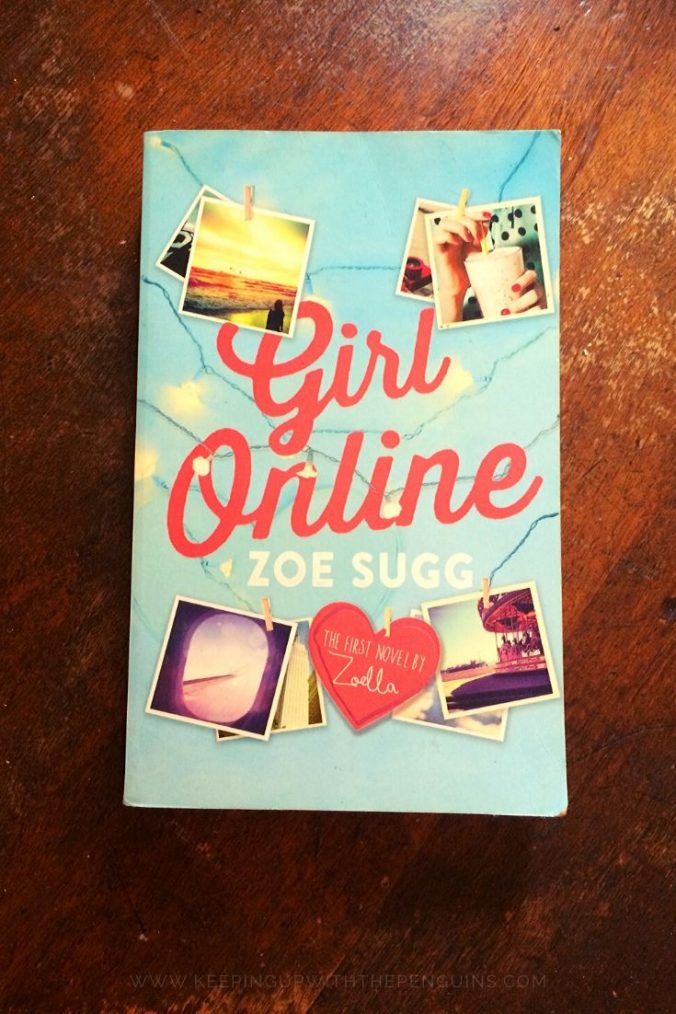 With reading – as with most things, I guess – timing is everything. I saved this bit of fluff to give my bookish brain a break between Sybil and Ulysses. Girl Online is the debut novel from the young “beauty, fashion, and lifestyle vlogger” Zoe Sugg. I’ll confess right now that I’d never heard of her before picking up this book, but her author bio says she has millions of subscribers on YouTube, so clearly she’s killing it.

Girl Online was first published in 2014, becoming a New York Times Bestseller in the Young Adult category, and the fastest-selling book of that year. It also broke the record for highest first-week sales for a debut author. Not bad, eh? I guess that’s the magic of being an internet celebrity: you’ve got a built-in audience, ready and willing.

Penny mostly uses her blog to vent about her typical teen problems: school, friends, family, boys, and so on. Then, a video of an embarrassing incident at her high-school play makes the rounds on YouTube, causing her great distress… so, her parents take a convenient week-long trip to New York (why is it always New York? Why is it never Wagga Wagga or Woop Woop?). They decide to take Penny and her gay-best-friend Elliot along with them. Naturally.

I could tell straight away that Girl Online isn’t going to age well. It’s chock-full of pop-culture references that already feel outdated: Justin Bieber? What’s he done lately? And I’ll try my best not to sound like a blogging snob here, but it must be said: Girl Online is a terrible domain name! It’s so vague! Penny really needs to work on her SEO. There, that’s all I’ll say on that, but you should know that the romantic sepia-toned version of blogging depicted throughout this book drove me nuts, all the way.


Immediately upon arriving in New York, Penny meets Noah, a mysterious teenage musician (again: why? Why are they always musicians?). She falls in love with him in a New York minute, of course. Alas, her parents cruelly separate them – i.e., they take her home when their holiday/job is over, instead of suggesting that she stay there on the other side of the world with the teenage boy she just met. Noah gives her a CD with a song he wrote for her on it before she leaves (vomit).

When Penny gets home, Noah’s “big secret” is revealed (this doesn’t even warrant a spoiler warning, because it’s so bleeding obvious): he’s actually a huge YouTube sensation, with two million followers or something like that. He’s about to release his first album. He didn’t tell Penny about his “big secret” because it was so nice to be treated “normally” for once (puh-lease). Oh, and he’s supposedly dating some other big-time pop star.

Penny’s all “see ya!”, which is an uncharacteristically good call on her part. Unfortunately, she’d already blogged about the whole romantic drama in real time. A former-BFF mean girl from school manages to join the dots, and she outs Penny’s identity as Girl Online, lover of the YouTube superstar. As a result, the blog goes “viral”, garnering lots of attention (the nasty kind) very quickly. Oh, and she has a fight with Elliot, too, so it’s a rough few days for her.

Cue many, many teenage melodramatics from Penny… only they transition alarmingly quickly into genuinely severe symptoms of an anxiety disorder. And here’s what really got under my girdle: no one, not even the parents, suggested therapy or a psychological evaluation for the hyperventilating teenager. I found it deeply disturbing how nonchalant they all were about it.


Don’t worry: in the last 50 pages, Penny and Elliot make up, the mean girl cops a milkshake to the face (a shameless rip-off of that pivotal moment in The Princess Diaries), and Penny gets an avalanche of suddenly-positive blog comments. Noah shows up to apologise, and says he was never really dating the pop star, it was all a show for publicity (yeah, yeah, that’s what they all say). The song he wrote for Penny is going to be the lead single from his first album, which is just, like, totally the most like, romantic thing evahhh.

Yes, it’s a super predictable ending, but I guess it could’ve been worse. In fact, on the whole, Girl Online was not as cringey as it could have been (and probably not as bad as I’m making it out to be here). It’s far from the worst young adult book I’ve read for Keeping Up With The Penguins: that gong would have to go to Divergent, or maybe The Maze Runner. Girl Online is definitely better than either of those. Thirteen-year-old me might’ve even enjoyed it.

There are, however, a couple of things that would hold me back from recommending it to the teens of today. Firstly, as I said, it’s very firmly anchored in the early 2010s, so with the pace of technology and culture today, it’s going to feel very dated very soon. Snapchat doesn’t even rate a mention! And secondly, again as I’ve said, I was deeply concerned by the implied messages that teenagers can treat and cure their own anxiety disorders through… deep breathing? Sheer force of will? Positive thinking? Just… honestly, where the fuck are the grown-ups here? It has the potential to be really damaging.


Sugg has said, repeatedly, that the book is “in no way autobiographical”… which just has to be a deliberate ploy to fuel the speculation that it is, in fact, autobiographical. I’d be willing to bet a lot of money that, even if none of it is “real” so to speak, a lot off Girl Online draws heavily on Sugg’s own romantic fantasies. There’s a strong whiff of wish-fulfillment with the turn of every page.

And that brings us to the other elephant in the room: the nature of Sugg’s “authorship” is… controversial, to say the least. I don’t doubt for a second that Girl Online was ghost-written, but neither Sugg nor Penguin (the publishers) are willing to officially confirm it. Penguin’s only public statement has been to say that Sugg “worked with an expert editorial team to help bring to life her characters and experiences in a heartwarming and compelling story”. Surely even the most wide-eyed naive fan can read between those lines.

Sugg knows marketing, though, which is another reason the book saw such huge sales. The US and UK covers each feature different images provided by Sugg’s fans (I’m assuming for free), selected via a competition she ran on her Instagram page. What Sugg lacks in literary chops, she makes up for in market savvy! She also published a sequel the following year, Girl Online: On Tour, and another the year after that, Girl Online: Going Solo. Based on the titles, and the trajectory of Girl Online, I’m guessing that Penny goes on tour with Noah until fame tears them apart, and then she forges a new life for herself as a fabulous single girl, before either getting back together with him or falling in love with someone even better. Whether I’m right or wrong, I doubt I’ll find out for myself. Still, I’m grateful to Zoe Sugg for this easily-digestible fairy floss snack between two canonical binges…

When We Were Vikings – Andrew David MacDonald

Books With Girl In The Title