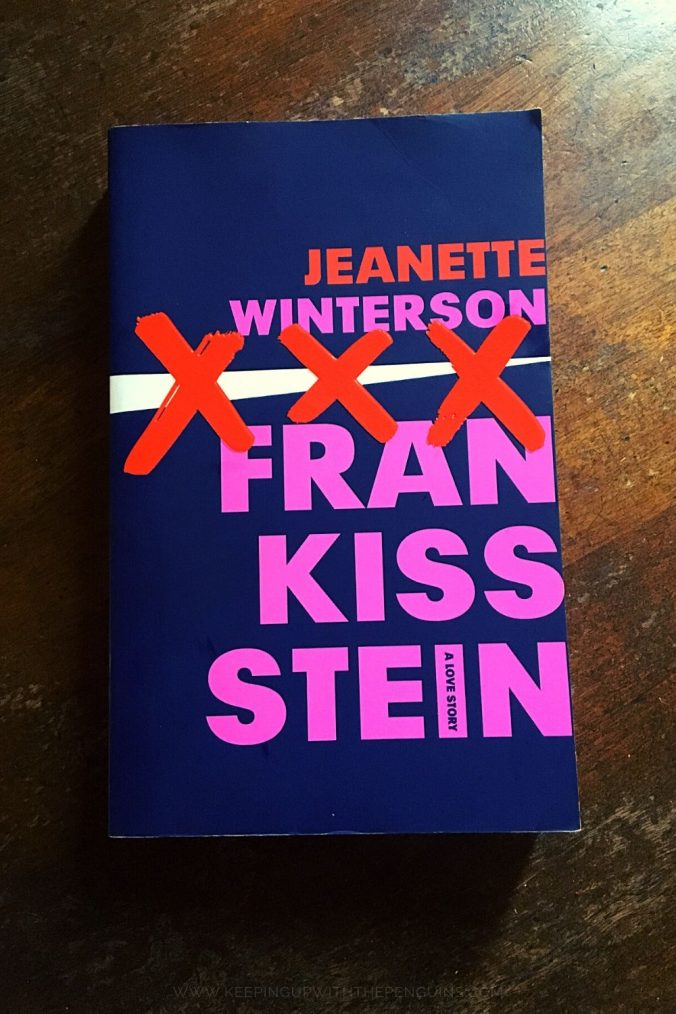 We’re never too old to try something new. Jeanette Winterson, of Oranges Are Not The Only Fruit fame, decided to have a crack at writing the trans experience last year with Frankissstein. In that spirit, I’m going to try something new with my review, too. See, given the content of this novel, it really doesn’t feel right for me to review it from only my own perspective. I’m allowed to have my own opinion, of course – everyone is! – but I think I would be doing you all a disservice by not calling in someone to speak to this book with me. So, here we have it: the first co-written Keeping Up With The Penguins review.

Writing this review with me is Cathal: a very, very, very (very!) dear friend of mine. We sell books together at a local book store, and also share a lot of mutual love over on #bookstagram. Cathal read Frankissstein around the same time that I did, at my urging. Cathal is a non-binary trans-masc person, like one of the central characters, so he has a particularly important perspective on the most salient aspects of this book.

Frankissstein tells two interweaving stories: a fictionalised account of the life of Mary Shelley in 1816, living with grief and writing Frankenstein; and an imagined near-future with Ry Shelley, a scientist grappling with the new reality of sex bots, artificial intelligence, and capitalist exploitation of those technological developments. Alternating between these two timelines makes for a strange hopscotch of historical fiction and speculative dystopia. Mary Shelley’s life story is fairly well-known, so we probably don’t need to lay too much of that out for you (other than to say that Winterson’s depiction of her, as a brazen outraged feminist who calls Lord Byron out on all of his bullshit, is amazing). Ry’s story is a little more complicated…


Ry was assigned female at birth, but identifies in the book’s timeline as trans/non-binary. It would seem, though, that they pass as masc/male, given that other characters constantly misgender them and mistake their name as being short for “Ryan”. Here’s where the problems begin…

Ry, as a character, is completely flat. Their only notable characteristic is their trans body. It is the only topic of conversation, the only factor at play in their relationships, and that bears little resemblance to the varied, interesting, and complex lives of trans people. Even making room for the demands and constraints of speculative fiction, Frankissstein fails even the most basic test of reflecting anything about actual trans lives and experiences.

Reviewers really, really went for Winterson’s throat on this, how she presented a supposedly-trans narrative. Sheree, as a cis-woman, didn’t want to discount their remarks, but at the same time she worried that their (rightly) impassioned responses might give the wrong impression (or, the right impression, not clearly explained) to other cis-readers. That’s why Cathal came on board for this review, to elucidate.

Winterson is a queer woman, a queer author, and in writing Frankissstein clearly sought to queer a canonical work of literature. Unfortunately, she missed the mark by a long margin. In real-life, she has made public comments that were deeply offensive to trans communities, and it would seem that those attitudes have parlayed into her work. Ultimately, Frankissstein is not a trans story, it wasn’t written by a trans author, and – as Cathal can attest – it wasn’t written for a trans audience.

In fact, it would seem that perhaps Winterson and her team willfully overlooked aspects of Ry’s story that would be hurtful and harmful to trans readers: being called a “freak”, being called a “hybrid”, the constant and unnecessary misgendering, the fetishisation of Ry’s body… While, perhaps, an argument could be made in favour of the artistic merit of any one of those choices, taken as a whole – in a story that only serves a privileged cis-gendered audience – they seem exploitative and cruel.


The only arguably effective attempt that Winterson made to address trans politics and experience in Ry’s story was “that” incident (if you’ve read the book, you know where we’re going with this, and if not, trigger warning!): Ry is violently assaulted in the men’s bathroom at a bar. This section was really resonant for Sheree. In her view, it made a really important statement about the “bathroom debate”. There have been some truly nonsensical arguments made about the supposed “danger” that trans people pose by using the same bathroom as cis-gendered people (particularly trans women using the same bathroom as cis-women). This scene presented the stark reality: in truth, trans people are at far greater risk of being victimised in that situation than being the perpetrators of violence.

Cathal saw it a bit differently. That assault was presented, he felt, as the price Ry had to pay for being who they are. Ry accepted the fact of their rape, without any retribution or resolution to that injustice. It was extremely graphic, no subtlety at all – right down to the use of in-your-face shouty caps – and alienating in its unavoidable gratuitousness. Also, Ry’s emotional reaction and trauma as a result of the rape is completely silenced; in fact, it barely comes up again for the rest of the novel.

Ultimately, we (Cathal and Sheree) still land on different sides of this one, but we can definitely understand and appreciate each other’s point of view.

Where we can completely agree, however, is the historical fiction timeline. Winterson’s talent as a writer truly shines in her depiction of Mary Shelley’s life. She pays due attention to the ways in which Shelley was mistreated, without painting her as a martyr or a voiceless victim. Winterson doesn’t romanticise Lord Byron or Percy Shelley, unlike so many who have written before her. The reader is encouraged to consider Frankenstein as a cautionary tale. As an adaptation, of sorts, it will make the reader appreciate the original even more. For those who haven’t read it, it will surely encourage them to pick it up.

That strand of Frankissstein is a complex and multi-faceted story all on its own. We both feel that, had we read the Mary Shelley story as a stand-alone novel, we would have loved it wholeheartedly. As it stands, however, we urge you to exercise caution when deciding whether to read Frankissstein for yourself. If you’re looking for a book that will open your eyes and teach you something new about the trans experience, give it a miss. If you want to read a beautiful re-telling of Mary Shelley’s life, go ahead and read it – just skip past the Ry chapters.

Note: thank you, again, to my wonderful friend Cathal, for his tireless patience as I pieced together our thoughts for this review. We had a lot of really frank conversations, and I’m so grateful that he took the time to do this. Be sure to check out his #bookstagram and show him the love he well and truly deserves!

Tender Is The Flesh – Augustina Bazterrica

12+ Books That Will Teach You Something New