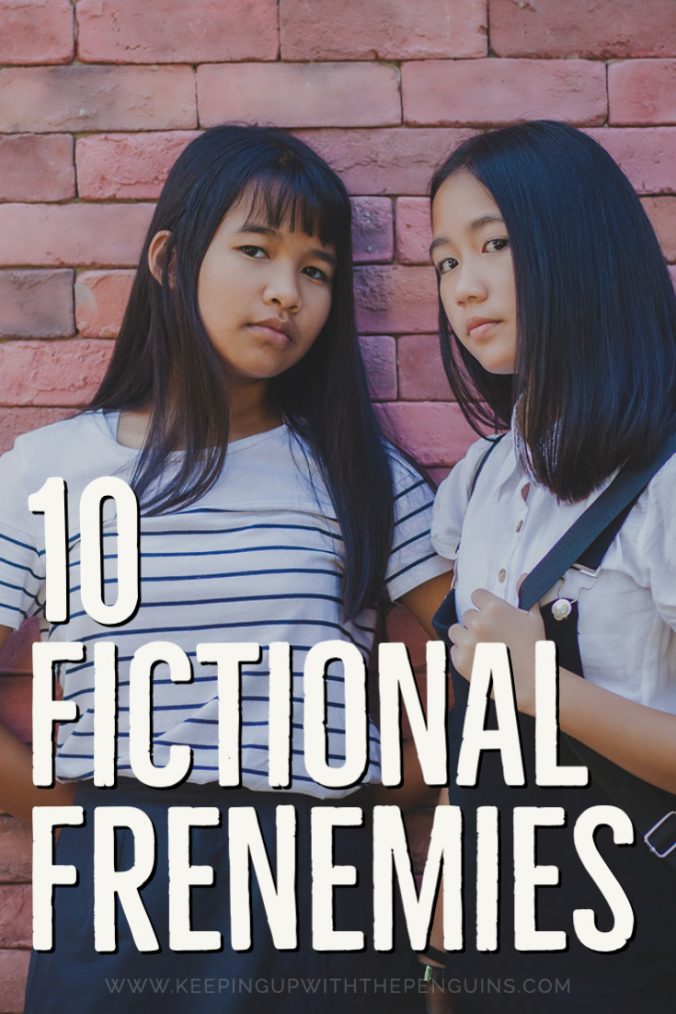 Okay, “frenemy” might be a tired portmanteau, but you need to understand that it hit peak saturation around the time I was starting high-school. So, the idea of “frenemies” is indelible from my experience of young adult friendships and female bonds. Most people cite Mean Girls or similar teen movies when they’re talking about fictional frenemies, but if you cast your eyes over the canon, you’ll find a strong tradition of fictional frenemies in novels, too. Here’s a list of ten fictional frenemies that will throw you right back to the days of heady adolescent confusion.

From Sula by Toni Morrison

Sula is a short novel, but if you know anything about Toni Morrison, you know that she can pack a lot into just a few pages. Nel and Sula are ride-or-die. Together, they fend off bullies and keep the most horrifying secrets. But, as they age, the cracks begin to show; as adults, these women are bona fide fictional frenemies. Nel becomes a wife and a beloved member of her community, while Sula is cast out for refusing to conform. When Sula returns, Nel will be forced to confront, once and for all, everything – good and bad – that ties them together.

From Cat’s Eye by Margaret Atwood

Elaine Risley is bitter as hell, and it’s hard to understand why. Cat’s Eye begins with her returning to Toronto, where she grew up, for a major retrospective of her artistic work. Being back in the city of her youth recalls to mind the fierce friends (or, you guessed it, frenemies) she once knew there. Suddenly, her bitterness starts to make a lot more sense. Margaret Atwood has an alarmingly sharp eye for the politics of friendship among young girls, and your stomach will probably twist as you read this book and recall memories of your own.

From Conversations With Friends by Sally Rooney

Who better to write fictional frenemies than a millennial wunderkind? Conversations With Friends revolves around friendships, secrets, and sex. While the plot ostensibly follows an extra-marital affair, the real core of the novel is Frances and Bobbi’s relationship. Frances and Bobbi are exes, still navigating the choppy waters of a post-romantic armistice, made doubly complicated by the fact that they perform poetry together. When photojournalist Melissa asks to profile them, and Frances falls into the arms of Melissa’s dissatisfied husband Nick, the web of fictional frenemies expands and catches them all. Read my full review of Conversations With Friends here.

From My Brilliant Friend by Elena Ferrante

Lenù and Lila must be the most iconic pair of fictional frenemies in contemporary literature. Ferrante’s Neapolitan Quartet begins with My Brilliant Friend, which covers their hard-knock childhood in an impoverished neighbourhood of Naples. Lenù is meek and bookish, Lila is flinty and street-smart, and they have more influence over each other than either would care to admit. The remaining three books in the quartet follow the pair through their adult lives; although they grow apart, they never manage to escape the other’s orbit entirely. Read my full review of My Brilliant Friend here.

From Never Let Me Go by Kazuo Ishiguro

Fictional frenemies don’t need a necessarily realistic setting to be relatable as all heck. The Hailsham school, the central location of Kazuo Ishiguro’s Never Let Me Go, seems like a normal boarding school at first – and what could be more normal than tween girls smiling at each other while polishing their (metaphorical) knives? Kathy and Ruth are drawn together, as Kathy tells it, through an empathic understanding of the struggle for social power. Ruth fabricates stories to elevate her mystique, and Kathy never calls her on it – until she does. Read my full review of Never Let Me Go here.

From Emma by Jane Austen

Okay, maybe this set of fictional frenemies is a bit one-sided – but Austen is such a master of insight and nuance, at least one of her books really belongs on this list! The titular character of her novel Emma has the kind of confidence that money can buy. She will never have to rely on marriage or social standing to keep the wolves from the door, and she takes full advantage of that fact. A casual observer may think that she takes pity on poor Harriet, who’s under pressure to make an advantageous match, but really Harriet is a pawn Emma uses to play her own game and bolster her own ego. Read my full review of Emma here.

From The Prime Of Miss Jean Brodie by Muriel Spark

The fictional frenemies in The Prime Of Miss Jean Brodie are unique in that their relationships are carefully cultivated and coordinated by a person in a position that they should be able to trust, their teacher. Miss Jean Brodie chucks the basics of good pedagogy in the bin and gathers around her a group of favourite students, “the Brodie set”, to whom she offers special lessons filled with her wisdom and advice. Little does she realise that her creation will be her undoing. The members of the Brodie set don’t only betray one another – one of them betrays their leader, too. Read my full review of The Prime Of Miss Jean Brodie here.

From The Other Black Girl by Zakiya Dalila Harris

In The Other Black Girl, twenty-something Nella is the only Black employee at Wagner Books… until Hazel arrives. Nella is relieved to finally have an ally in the office, someone to bond with over the microaggressions that are as much a part of the everyday as printing pages for her boss. Then, Nella starts receiving threatening notes on her desk: they say “LEAVE WAGNER, NOW”. Is it just a coincidence that the notes coincided with Hazel’s arrival, or is there something darker at play? Hazel definitely isn’t the work-BFF that Nella was hoping for. Read my full review of The Other Black Girl here.

Truman Capote and the Swans

From The Swans of Fifth Avenue by Melanie Benjamin

C’mon, it’s the 21st century: boys can be frenemies, too! The Swans Of Fifth Avenue is based on the real-life frenemieships of Truman Capote and a set of wealthy Manhattan socialites. Capote is an impish gay (i.e., non-threatening) writer on the come up when he catches hold of Babe Paley’s coattails. Babe is the Queen Bee of the Swan set, and soon Capote has infiltrated their group. Little do they realise that he has more to gain from their friendships than invites to their swanky parties and brunches. Read my full review of The Swans Of Fifth Avenue here.

Notes On A Scandal – Zoë Heller