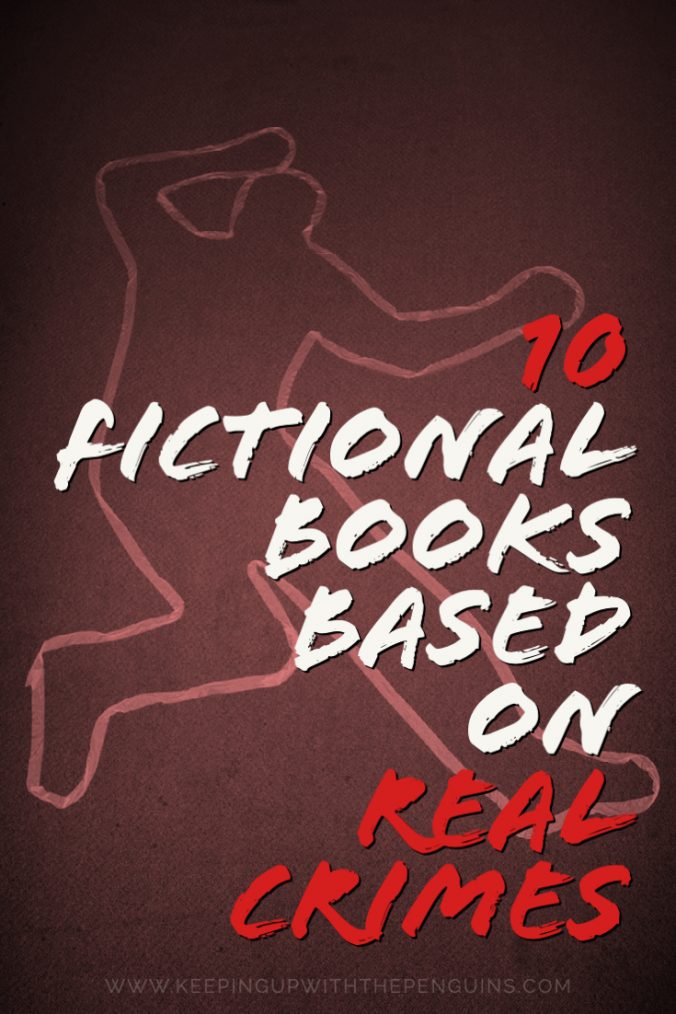 10 Fictional Books Based On Real Crimes

It can’t be easy for authors to be dreaming up plots all the time, especially when the truth is so often stranger than fiction. The authors of these ten fictional books based on real crimes drew the core of their stories, in varying levels of detail, from the headlines.

Trigger warning: this list, by default, includes information about some pretty awful crimes. I’ve tried to avoid the graphic details of anything too grisly, but a heads-up that it could be tough going all the same.

The Girls by Emma Cline

Have you ever wondered what draws young people, women in particular, into cults like The Manson Family? That’s what Emma Cline explores in The Girls, a book based – pretty loosely – on the women who were lured to Charles Manson’s ranch in California in the summer of 1969. In real life, the crimes of the Manson Family have become the stuff of pop-culture legend (horrifying, nightmare-fuel legend): among other assaults and trespasses, they infamously broke into the house of actress Sharon Tate and murdered her, and four others. While much has been made of Charles Manson, the man at the head of his “family”, this story is brilliant and unique in that it focuses on the lesser-known narratives, those of his followers.

Notes On A Scandal by Zoë Heller

If books and films are to be believed, high-schools are hotbeds of criminal activity. Zoë Heller’s Notes On A Scandal (originally called What Was She Thinking?, prior to the name change for the film adaptation) uncovers many dark secrets in that setting, not the least of which is young teacher Sheba Hart’s illicit affair with a student. Heller has said that she was inspired by the real life crimes of Mary Kay LeTourneau. LeTourneau was a school teacher in Washington who sexually abused a sixth-grade student in the mid-90s. After she pled guilty to felony second-degree rape of a child, she was sentenced to a short stint in jail and forbidden from contact with her victim for life. She violated that condition, and gave birth to two children fathered by him. Read my full review of Notes On A Scandal here.

We Need To Talk About Kevin by Lionel Shriver

Beloved by book clubs everywhere, We Need To Talk About Kevin explores one of the most heart-wrenching crimes: a school shooting. The name of the Colorado town Columbine has become synonymous with one of the most tragic massacres of that nature, the inspiration for Shriver’s devastating novel about the mother of an otherwise-fictional perpetrator. In 1999, Eric Harris and Dylan Klebold (both seniors at Columbine High School) killed twelve students and one teacher, injured a further 21 students, and turned their weapons on themselves to die by suicide. This horrific crime has inspired many copycats, and there are arguments to suggest that books like Shriver’s fuel the fire.

A Brief History Of Seven Killings by Marlon James

Bob Marley is best known for his music, rather than his involvement in any crime, but the latter is the focus of Marlon James’s Booker Prize-winning novel A Brief History Of Seven Killings. The saga of the novel revolves around the true story of the 1976 assassination attempt on Marley. Just two days before he was set to play at the Smile Jamaica Festival, an attempt to quell recent political violence, seven armed men raided his home and opened fire. The shooting was motivated by Marley’s perceived endorsement of then-prime minister Michael Manley (though the musician had always publicly emphasised his own political neutrality). Marley and three others were shot, but all survived, and their attackers were caught, tried, and executed for the crime.

Few real life crimes have captured and horrified the world like the Fritzl case. Though it didn’t make headlines until 2008, the crime began decades earlier. Elisabeth Fritzl had been abused by her father since age 11; after she attempted to escape, he lured her into the basement of their family home and knocked her unconscious, and so began her twenty-four-year imprisonment. Her father kept her locked in the purpose-retro-fitted chamber, and subjected her to frequent violent and sexual assaults. The abuse resulted in the birth of seven children, three of whom were raised by Elisabeth in her captivity. The story sparked an idea in Emma Donoghue, and her fictional book Room – in which a young woman kept imprisoned by a man who beats and rapes her, raising a child in the most horrifying of circumstances – is the result. Read my full review of Room here.

Agnes Magnúsdóttir might not be a household name, but she still occupies an important place in world history: she was the last woman to be executed in Iceland, beheaded by axe in 1830. Hannah Kent imagines Agnes’s life in the lead-up to her death, sent to a remote farm to live with an appalled family who avoids her and a spiritual advisor who has taken a spiritual interest in her, in Burial Rites. Prior to that time, Agnes was an intelligent and talented young woman who worked as a maid for herbalist Natan Ketilsson. The truth of what actually happened at Ketilsson’s farm is blurred and lost to time, but it would appear that a series of romantic entanglements led to Agnes and two accomplices stabbing and bludgeoning Ketilsson and his friend to death, and attempting to cover the crime with a fire.

All The King’s Men by Robert Penn Warren

Robert Penn Warren insisted all of his life that his book All The King’s Men was “never intended to be a book about politics”… which makes writing about a character that closely resembles real-life Louisiana Governor Huey P. Long a very strange choice. Over the course of the novel, the fictional Govenor Willie Stark earns himself many political enemies (as Long did in real life), retains huge popular appeal with his constituents (as Long also did in real life), and meets his end assassinated by a gun-toting doctor in the state capitol building (you’ll never guess what happened to Long…). Despite these abundantly obvious parallels, Warren strenuously denied that Stark was based on Long. Most readers, myself included, call bullshit. Read my full reviews of All The King’s Men here.

Margaret Atwood is, among other things, incredibly prolific, and many of her many fictional books feature dark crimes. The one most notably based on a real life crime, though, is that of Grace Marks, which Atwood fictionalised in Alias Grace. Back in 1843, 16-year-old Grace was tried for the murder of her employer and his mistress. Public opinion was divided – still is, to be honest, which is probably why Atwood chose to tackle the story to begin with – as to whether Grace was evil, insane, victimised, or some combination of the three. In Atwood’s version, Grace claims to have no memory of the murders, and a would-be-psychologist (remember, psychology was hardly a shadow of a field back then) tasks himself with uncovering the truth. Read my full review of Alias Grace here.

See What I Have Done by Sarah Schmidt

We all know the rhyme: “Lizzie Borden took an axe / and gave her mother forty whacks / When she saw what she had done / she gave her father forty-one”. It’s based on the real life murder of Lizzie Borden’s parents, but what if there’s more to the story? That’s what Sarah Schmidt explores in See What I Have Done, her fictional account of what really happened in the Borden household prior to the murders, from multiple viewpoints. Even though Lizzie Borden was acquitted at the time, there remains much debate as to her involvement in the crime – if any. Oh, and it bears mentioning: the rhyme is wrong, Lizzie’s father was struck 10 or 11 times and her mother 18 times, but that wouldn’t scan.

The Lake House by Kate Morton

The plot of Kate Morton’s The Lake House – an eleven-month-old disappears from his bedroom, without anyone in his family hearing or seeing a thing, and he is never found – bears much resemblance to the real life Crime Of The Century, the kidnapping of the Lindbergh baby. The fictional and real-life crimes even occurred in the same year, 1933. It seems reasonable to assume that that’s where Morton drew her inspiration, but she has said she was actually thinking more of the case of the Beaumont children, three siblings who disappeared without a trace from an Australian beach in 1966. That case has never been solved, despite several witnesses and confirmed sightings of the children after their disappearance; a $1 million reward is still on offer from the South Australian government for any information regarding the case. Read my full review of The Lake House here.