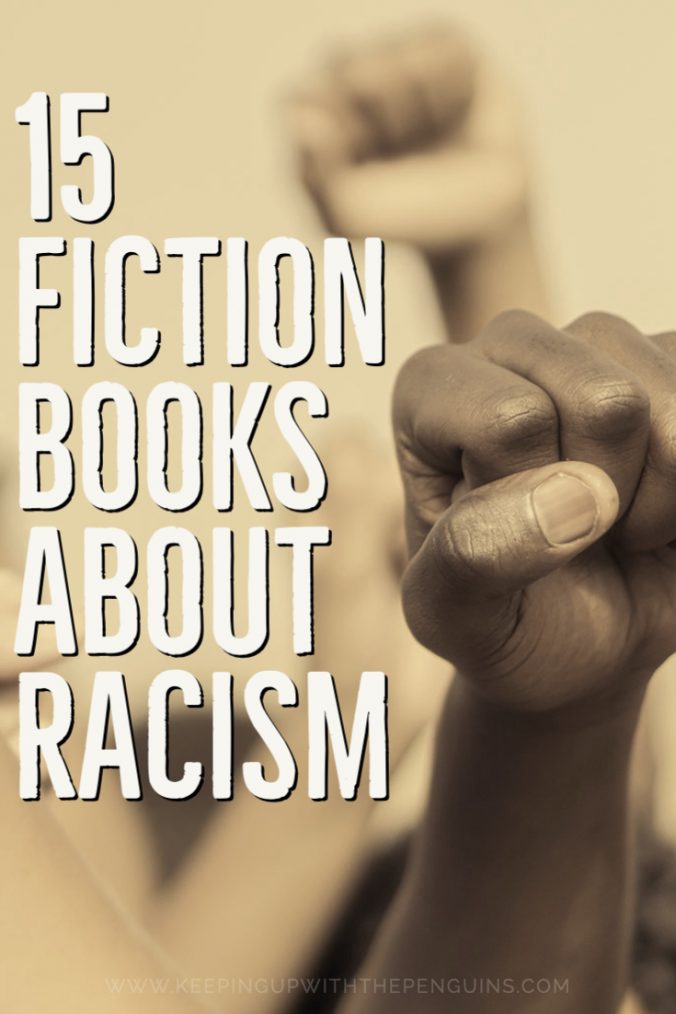 Reading fiction increases our empathy – both in general, over the course of our lifetimes, and also with regards to the specific issues and situations raised in a particular book. What’s more, the increase in that situation-specific empathy makes us more likely to engage in helping behaviours: to volunteer, donate, protest, or otherwise support. It’s true! It’s science! That’s why reading fiction books about racism is such an important tool in dismantling oppressive systems of prejudice. Check these out…

When most kids first hear about the Underground Railroad, they picture just that: train tracks that ran underground and ferried slaves to safety during a truly abhorrent period of American history. Colson Whitehead is the first writer – as far as I know – to take that childish notion and turn it into literary fiction. The Underground Railroad is a semi-speculative alternative history of the antebellum South, one that Barack Obama called “terrific” and won the Pulitzer Prize in 2017. So much of what happens to escaped slave Cora is gut-churningly awful, and yet Whitehead makes it compelling and thoroughly readable. Read my full review of The Underground Railroad here.

Michael and Mina meet under all-too-usual circumstances. They’re attending a rally for refugees – only their families are standing on opposite sides. Michael’s parents oppose the acceptance of refugees in their country; they’ve even founded a minor political party, “Aussie Values”, to fight against it. Mina and her mother fled Afghanistan in a leaky boat, and settled in Australia hoping to forge a new life for themselves – the kind of life Michael’s parents want to stop them having. When Michael Met Mina is a teenage love story set against the backdrop of anti-immigrant racism in contemporary Australia, one that pits love against hate in the hearts and minds of the next generation.

The Hate U Give by Angie Thomas

The Hate U Give by Angie Thomas was one of the most-frequently banned and challenged books in the year it was released, according to the American Library Association. Why? Officially, for its profanity, vulgarity, and references to drug use. But, unofficially, it’s hard to imagine that it’s for any reason other than it might stoke the fire of young would-be Black Lives Matter activists in the tinderbox that is the United States. This is a story about the human cost of racially-motivated police brutality. When Starr Carter’s friend Khalil is shot by an officer, leaving her as the only witness, she’s forced to make a choice: protect herself and her family, or speak the truth? Read my full review of The Hate U Give here.

Australia Day is a short story collection by doctor-turned-writer Melanie Cheng. Each of its fourteen stories is a slice of life from a “typical” Australian… but, of course, there’s no such thing. The collection’s title points especially to the first and last stories, both set on Australia Day. In the first, a young medical student, an immigrant from Hong Kong, bravely facing a hailstorm of microaggressions at an Australia Day barbecue. In the last, elderly Mrs Chan prepares to celebrate her grandson’s birthday, which just so happens to fall on that date. Cheng makes the struggles against racism and oppression tangible in this provoking collection. Read my full review of Australia Day here.

The Bluest Eye by Toni Morrison

The Bluest Eye has a heart-wrenchingly common premise: an 11-year-old black girl wishes that she had blue eyes. She prays that her own brown eyes will turn blue so that others will think she is beautiful, a product of the racism embedded in our capitalist society’s beauty ideal. Morrison’s writing is “so precise, so faithful to speech and so charged with pain and wonder that the novel becomes poetry” according to the New York Times, and this book is a tragic Bildungsroman that still has much to teach us about the way even implicit racism suppresses the potential of children. Read my full review of The Bluest Eye here.

The term from which this book gets its name has special significance in Australia (not the good kind), as this continent was declared “terra nullius” when the British invaded, in effect erasing the sovereignty of the people who had lived and worked on this land for some 50,000 years. Claire G Coleman turns this legal concept on its head in her allegorical novel, Terra Nullius. She lets the reader believe it’s a historical novel – depicting the genocide of the First Nations people of Australia – when it’s actually set towards the end of the 21st century. The “Natives” are human beings, of all colours and creeds, while the “Settlers” are an alien species that have invaded our home planet. It’s a shocking inversion that will confront and provoke readers. Read my full review of Terra Nullius here.

The Color Purple by Alice Walker

The Color Purple is a story told largely through letters to God, from a black woman named Celie. When she starts writing these letters, she is just fourteen years old, and yet she has already seen and experienced a lifetime’s worth of hardship. It has gone on to become a contemporary classic of American literature, one that broke the silence around domestic and sexual abuse, narrating the lives of Black women through their pain and struggle, companionship and growth. Of all the fiction books about racism, this one is surprisingly uplifting. Read my full review of The Color Purple here.

In Megan Giddings’ startling debut novel, she explores race and racism through a story of desperation and medicine. Lakewood revolves around Lena Johnson, a Black millennial woman who is forced to drop out of school and take on a terrifying job as a guinea pig to pay for her family’s debts. The job seems too good to be true – no medical expenses and a place to live, in Lakewood, Virginia – but as a condition of her “employment” she must lie to her loved ones about what she’s doing, and soon even more alarming consequences come to light. Read my full review of Lakewood here.

Jesmyn Ward tells a story of struggle and hope through three generations and a journey across Mississippi in Sing, Unburied, Sing, her National Book Award-winning novel. Jojo is a thirteen-year-old boy with some dubious role models: the black grandfather who raised him, the absentee white father in prison, the uncle who died as a teenager… and Jojo’s mother, Leonie, is too busy waging her battle against drug addiction to put her kids first. Some of the stereotypes are brought to life, some of them are inverted, but all of them are deftly depicted in this dazzling, lyrical novel.

The Vanishing Half by Brit Bennett

In The Vanishing Half – one of Barack Obama’s favourite books – we get to see the Sliding Doors of race and racism. Twin girls from a small all-black Southern community are inseparable, until they escape to the big city and they face a fork in the road. One chooses to embrace her black identity, marrying a dark-skinned man and having his child, while the other chooses to “pass” as white and assimilate into a white suburban life. They grow further and further apart, but their lives and fates remained intertwined. Fiction books about racism like this one depict the divisions both between and within communities. Read my full review of The Vanishing Half here.

The Book Of Unknown Americans by Cristina Henríquez

A lot has been written about Latinx immigration and the pursuit of a “better life” in the United States, and The Book Of Unknown Americans is a particularly stunning example of fiction books about racism faced by immigrant families. Henríquez uses the story of star-crossed lovers – Maribel the beautiful, damaged outsider, and Mayor, the kid next door – to ground an epic tale “of hopes and dreams, guilt and love”. This book, recommended by Oprah, offers “a resonant new definition of what it means to be American”.

Such A Fun Age by Kiley Reid

Such A Fun Age is a bit of a bait-and-switch: what appears to be a fun, summer read actually turns out to be one of the most searing fiction books about racism of recent years, a provocative page-turner that got tongues wagging at all the book clubs. When a young black babysitter is exposed to racist harassment while caring for the child of her privileged white employer, it sets off a chain reaction that reveals the surprising truth that connects them. This book is every bit as fun as the pink-laced cover promises, but it will also give you a lot to think about. Read my full review of Such A Fun Age here.

Pachinko begins in the early 20th century, with a fisherman’s daughter falling in love with a wealthy stranger who promises her the world. Their story meets an abrupt end when she discovers that he’s already married, and she’s pregnant… but the extraordinary epic continues. Lee depicts the often-overlooked truth of racism within and between Asian countries, the weight of lineage and the strength of loyalty. Across the geography and decades of this multi-generational tale, Lee’s “complex and passionate characters… survive and thrive against the indifferent arc of history”.

The Sellout by Paul Beatty

Not many fiction books about racism will make you laugh out loud, but the biting satire of Paul Beatty’s The Sellout can do the impossible. The narrator is resigned to a predictable life (“I’d die in the same bedroom I’d grown up in,”), the only hope of escape being his father’s memoir – a perpetual work in progress. When his father dies, he discovers there never was a memoir, and his fury at the injustice leads him to take drastic action. Well, given that he petitions the Supreme Court to reinstate slavery and segregation, maybe “drastic” is putting it mildly…

Many fiction books about racism take the wide view, tackling the Big Topics (slavery, police brutality, segregation, and so forth). Celeste Ng has a unique talent for tackling the big topics in miniature, as seen in her international best-seller Little Fires Everywhere. The story is set in Shaker Heights, a picture-perfect Ohio town where the picture-perfect Richardson family is about to have their lives upended by the arrival of two enigmatic strangers. Mia Warren, and her daughter Pearl, have a strange disregard for the status-quo that threatens the precarious balance of their community – not to mention the stability of the home of a newly-adopted Chinese-American child. Read my full review of Little Fires Everywhere here.