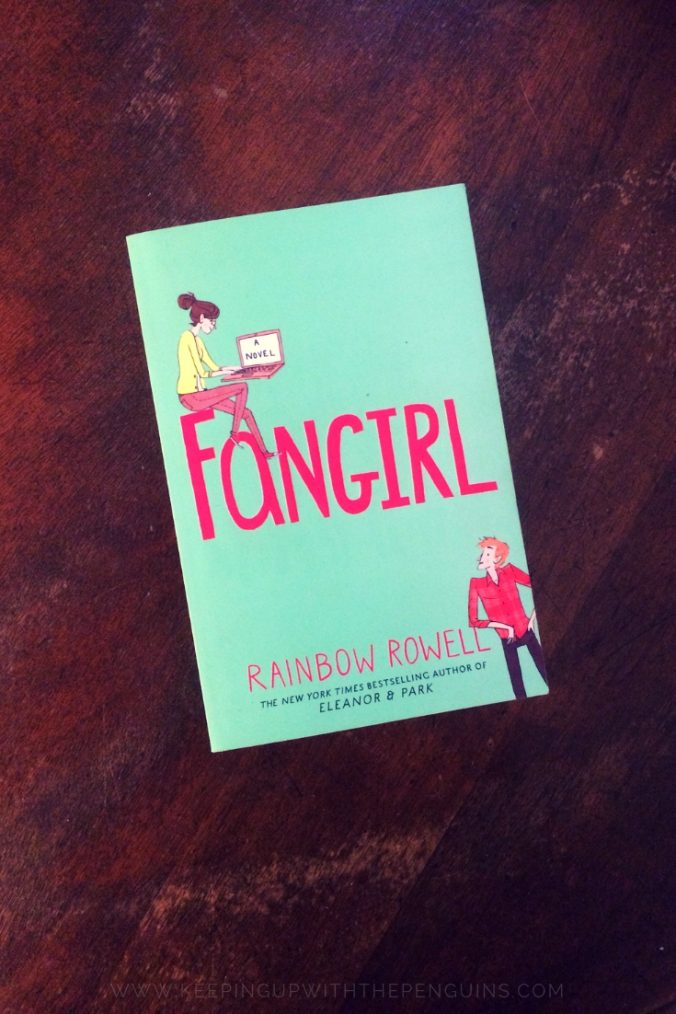 As you’re all well aware by this point, I rarely buy books brand-new. In fact, Fangirl by Rainbow Rowell is the very first brand-new book I’ve purchased for Keeping Up With The Penguins. I received a birthday gift voucher for a bookstore chain last year, and seeing as Fangirl has proved impossible to find in secondhand bookstores thus far, I bit the bullet and treated myself to a virgin copy, all shiny and new.

Fangirl was released a few years ago now, back in 2013, and yet I still see it all over #bookstagram every single day. It has a fairly standard young adult plot in that it’s a story about university students, written for high-school students. There’s an extremely earnest protagonist, Cath, who would be totally annoying except that she’s also quite socially anxious, which I found to be quite endearing and relatable. She’s nowhere near as irritating as Katniss from The Hunger Games, anyway…

Cath is a freshman student at the University of Nebraska-Lincoln. She has a sister (Wren) who is far more outgoing and sociable, but prefers to stay holed up in her room writing fan-fiction about Simon Snow, her favourite young-boy-magician-saves-the-world series (*cough*Harry Potter*cough*). Yes, people, there’s a story within a story (groan).

She has quite a bit to contend with, on the whole: her bipolar father has a full-on collapse, her twin sister has a burgeoning drinking problem, her mother has a whole new life (having abandoned the family when the girls were eight), and her primary love interest is her snarky room-mate’s ex-boyfriend. So, her anxiety is kind of understandable, really.

Still, there are a lot of unrealistic elements to the story that I found really jarring. First off, I can’t see Cath amassing a large following for her fan-fiction (she mentions frequently that she has 10,000 readers). She just doesn’t work all that hard at it, as far as I can tell. I mean, sure, it could happen… but it just seems so unlikely when she doesn’t seem to put any time or effort into developing an online presence or marketing her work. Just ask any self-published author: readers don’t materialise out of thin air, no matter how good you are.


And secondly, Cath finds a mentor of sorts in her creative writing lecturer, and I just cannot believe that a professor would invest so much personal time and effort into a student who’s so resistant (once again, no matter how talented they are). University lecturers are strapped for time as it is; they have dozens of students clamouring for their support and guidance – ones that are desperate to write and improve, no less, and don’t need to be coaxed into it the way that Cath does. Why would a professor waste her time with a student that doesn’t even seem to want to try?

Honestly, the most realistic part of Fangirl was the self-absorbed self-indulgent white guy in Cath’s creative writing class. He writes the same Manic Pixie Dream Girl character over and over again, until he starts ripping off Cath’s work and goes on to find massive success passing it off as his own. I strongly suspect that Rowell has encountered more than one of these arseholes over the course of her career, because she absolutely nailed that particular character.

I also took issue with the ending, which felt pretty anti-climactic. I’d been expecting the resolutions to all the various plot lines to be a little more clear and explicit and… well, resolute. That said, I bitched about that very style of ending when I reviewed Paper Towns, so maybe I’m just being difficult. I haven’t read a whole tonne of young adult fiction (even when I was a young adult), but I’ve read enough now to know that very neat endings are kind of a convention of the genre, and that expectation just isn’t met in this one. I found out later that Fangirl is a NaNoWriMo novel, meaning it was written in a single month in 2012, which maybe explains why the pacing was a bit funky and the ending a bit rushed and unclear. Still, shouldn’t that have been corrected in the editing process? I’m not shitting on NaNoWriMo novels by any means, but writers can hardly spend the time needed to fix structural issues and plot holes when they’re vomiting up an entire novel in a single month.


Even though the pieces didn’t click together for me personally, the critical reception of Fangirl was pretty positive, and a lot of people have praised Rowell for her realistic portrayal of fangirl-ing culture. In fact, the book was so popular that Rowell later (in 2015) published Carry On, which is technically a stand-alone story but is also the fan-fiction story that Cath was writing throughout Fangirl. I’ve seen that one all over #bookstagram too, so it clearly found an audience, perhaps even more so than the original book. I’m glad to have read Fangirl, but as I’m sure you can tell by now I wasn’t exactly a fan(girl), so I don’t think I’ll be seeking out Carry On for my next reading list. Sorry. 😐

I feel a bit shit, like I’m being too harsh; Fangirl is super-popular and has clearly struck a chord for a lot of readers. I suspect it’s great for people who really love young adult books and have already read (and enjoyed!) widely within that particular genre. If you struggle with young adult, or it’s not your usual preference, Fangirl is probably not the one to start with. The good news is that Rowell has also written for adults (Attachments, and Landline), and those books actually sound pretty good, even by my tough standards. Even though I didn’t love Fangirl exactly, I didn’t hate it so much that I wouldn’t give Rowell’s grown-up books a try. And hey, this ain’t the worst review I’ve ever given, by a long shot 😉

My favourite Amazon reviews of Fangirl:

7 Books That Are Hard To Find Second Hand (And My Best Tips To Track Them Down!)