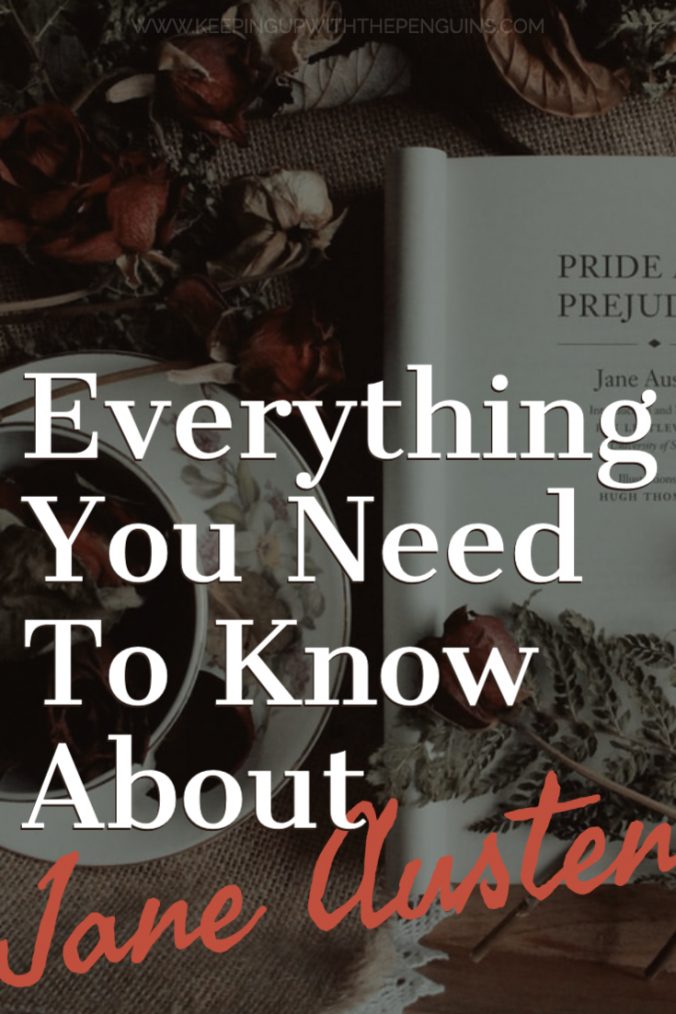 Everything You Need To Know About Jane Austen

Few historical literary figures have held our attention like Jane Austen. We talk and think a lot about her life, almost more than we do the books she wrote. Where there are gaps in our knowledge (and there are many, for her sister destroyed most of her letters after her death), we’re tempted to borrow facts from her fiction, but it would seem that very little in Austen’s work was autobiographical. Still, understanding Jane Austen definitely allows us a better and fuller understanding of her writing. If you can’t be bothered reading the hundreds (thousands) of books and articles about her, this should do: here’s everything you need to know about Jane Austen.

Baby Jane was born in 1775 in Steventon, Hampshire. Her father was a clergyman, with a few side-hustles to keep the family afloat (they were respectable enough, but not well-off financially). Her mother was of the aristocracy – she “married down” – but didn’t seem to regret it in the slightest.

Jane was (get this) the second-youngest of eight(!) children, and one of only two(!) girls. She and her sister, Cassandra, were sent to live with their Aunt Ann Cooper Cawley for a time as children before being sent to boarding school. Jane and Cassandra remained incredibly close throughout their lives. They lived together for most of their lives (at times even sharing a bedroom) and they were each other’s closest confidantes.

As a grown-up, Austen never married, but her love life has been the site of much speculation and curiosity. I’m not overly eager to join the leagues of Janeites desperate to pair her off – I think there are so many more interesting things about her than her relationships with men – so suffice to say she probably had a couple of hot flings, but nothing stuck. That could’ve been the reason that she and Cassandra remained so close; her sister’s fiance and one-true-love died of yellow fever, and she never married either.

Sadly, Jane Austen died in 1817 at just 41 years old, after a months-long illness (now suspected to have been Addison’s disease or Hodgkin’s Lymphoma).

Austen began writing parodies and satires at just 12 years of age. Despite showing early talent and eagerness, her writing career didn’t kick off in earnest until the old-timey-equivalent of “late in life”. She had no independent source of income until she was 36, and relied on pocket money from her parents and hospitality from her family and friends to get by. Her brother had to cover the costs of the initial print run of her first novel (Sense And Sensibility), because she couldn’t find a publisher willing to take the risk.

Only four of her books were published during her lifetime (Sense and Sensibility, Pride And Prejudice, Mansfield Park, and Emma). After her death, Persuasion and Northanger Abbey were published with a Biographical Note from her brother, identifying Austen as the author. Then, her work fell out of circulation altogether, with no new prints published until a decade later when her popularity resurged. Sanditon – her final, incomplete manuscript – wasn’t published until a century later.

The last thing Jane Austen ever wrote – as far as we know – was a poem for her sister, a silly joke about the rotten weather. I haven’t been able to find it anywhere, I suspect it was destroyed in the Great Cassandra Austen Purge, but if you know that it exists and where, please let me know in the comments!

Alright, now that that’s out of the way, let’s leave behind the bare-bones biography and get to the good stuff! Here are some of the best Fun Facts(TM) I’ve unearthed about Jane Austen’s life and career. Some of them are fairly well-established and I was able to corroborate them with multiple sources. Others… well, it’d be fun to assume they’re true, if nothing else. Here are some interesting facts about Jane Austen (probably), in no particular order.

She had a knack for brewing her own beer. She used molasses to give her brews (called “spruce beer”) a sweeter taste. She also lamented, in one letter, that her household was running out of mead (apparently fourteen gallons wasn’t enough to last the season) and she had no honey to make more. She must’ve had a bit of a sweet tooth, because she also wrote of her appreciation for sponge cake and Bath buns (basically a rich brioche bread).

She dedicated Emma to the Prince Regent of the day. He was a big fan of her work (having heard through the grapevine that she was the anonymous author of Pride And Prejudice), but she… well, she thought he was a dickhead, and said as much in writing. She got word through the Prince Regent’s librarian that it might be a good idea to dedicate her next book to him, to smooth things over. It wasn’t a suggestion, if you catch my drift.


In the years that Jane Austen lived with her sister and their friend Martha in a house in Chawton, she would write in a room with a squeaky door. She refused to have the door fixed, because she preferred to have warning of anyone approaching to interrupt. Those were some of the most productive years of her writing career: she worked on (writing, revising, and publishing) most of her major works during that time.

Jane Austen’s main hype-man was her Dad. George Austen stoked the flames of her literary mind with a huge home library, and took it upon himself to shop her early novels around to publishers (who were reluctant, to say the least, to publish books written by women – boo to them!). Later, her brother Henry took over the role of Jane’s agent, with similar determination.

Although she was shamefully over-looked (being anonymous and all) and under-paid (publishers being arseholes and all) in her own time, we sure as heck recognise her brilliance now. The most recent estimate puts sales of Pride And Prejudice at twenty-million copies in the 200 years since its publication. It’s amazing to think that her assets totalled less than £800 at the time of her death, and she never lived above the era’s poverty line… But let’s not end on such a bummer note. Let’s focus instead on how much we ardently admire this amazing lady, and the enduring power of her work.