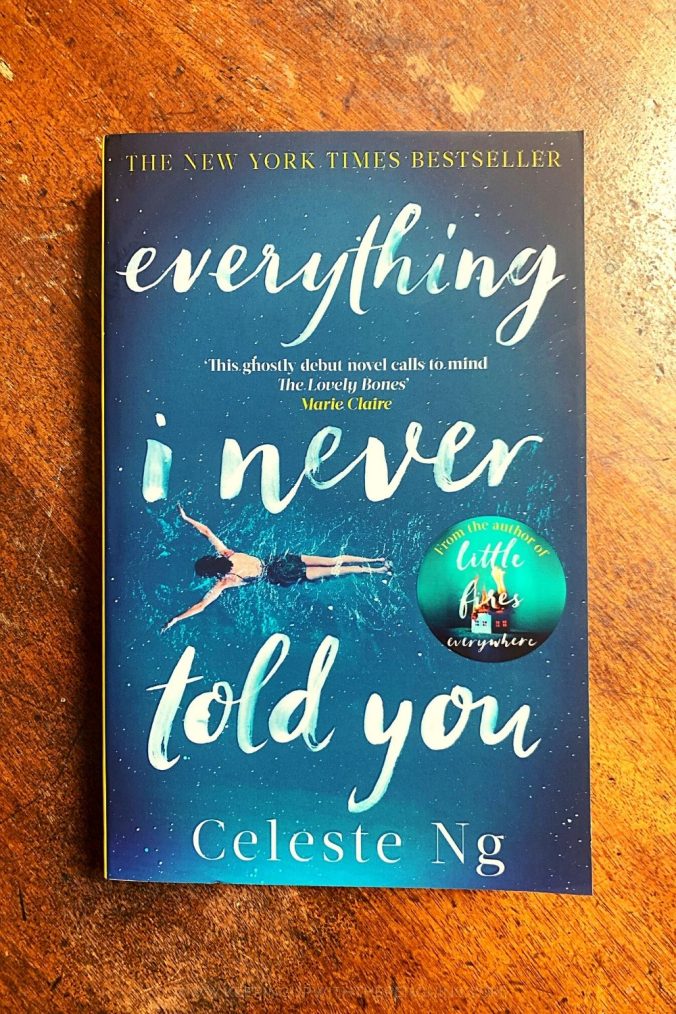 Everything I Never Told You – Celeste Ng

Like many readers, I picked up Celeste Ng’s second novel, Little Fires Everywhere, before her debut – but believe you me, I was out the door hunting down a copy of her first as soon as I turned the final page. Everything I Never Told You is Ng’s first novel, published in 2014, and while it didn’t make a splash the way that the follow-up did, it’s still an intriguing and intense read.

Everything I Never Told You begins in 1977. The Lee family appears to be average in every way – working father, stay-at-home mother, three kids and a comfortable home in Ohio. Except that their middle child, Lydia, is dead… and they don’t know it, yet.

That sounds like a spoiler, but it isn’t. It’s in the blurb, it’s in the first sentence, and Lydia’s body has been found by the end of the first chapter. So, cool your jets.

Lydia’s death forces everyone in the Lee family to reevaluate their lives, and reveals some hard home truths. As an investigation plays out in the background, they realise they didn’t know Lydia – or each other – as well as they thought. Their bright, popular, bubbly girl was in fact a ball of angst with few friends and slipping grades. It turns out, James and Marilyn Lee hadn’t done as good a job concealing their own struggles from their children as they’d thought.

Race plays a major role in this family drama. A lot of the tension stems from the fact that white regional Ohio was not a comfortable place to be for Chinese Americans in the ’70s, and mixed race families faced uphill battles on every front – internal and external. These issues have new resonance with the spike in anti-Chinese sentiment in the States (and, I’m sorry to say, other parts of the world) after the outbreak of the novel coronavirus in late 2019.

Everything I Never Told You is a propulsive read, but not an easy one, if that makes sense. It’s much darker than I remember Little Fires Everywhere being, with darker themes and content. Trigger warnings, naturally, for depression, suicide, infidelity, and racism.

But Ng’s writing shines, despite the darkness – she knows just how to drag a reader’s eyes down the page. In particular, I want to call out her pithy and apt descriptions (“a woman built like a sofa cushion”, and “a florid ham hock of a man”). She has said that she spent six years working on Everything I Never Told You, writing four different drafts. Her hard work definitely paid off.

For her efforts, Ng won the Amazon Book Of The Year award of 2014, beating out the popular favourites Stephen King and Hilary Mantel. She was widely praised, by readers and critics alike, for her domestic psycho-drama and her depiction of the damage that parents can inflict on their children.

Because ultimately, that’s what this book is about: the weight of parental hopes and dreams, even (especially) the unspoken ones. Once again, I find myself eagerly anticipating another Celeste Ng novel – luckily, I won’t have to wait for long!

My favourite Amazon reviews of Everything I Never Told You:

No One Round Here Reads Tolstoy – Mark Hodkinson