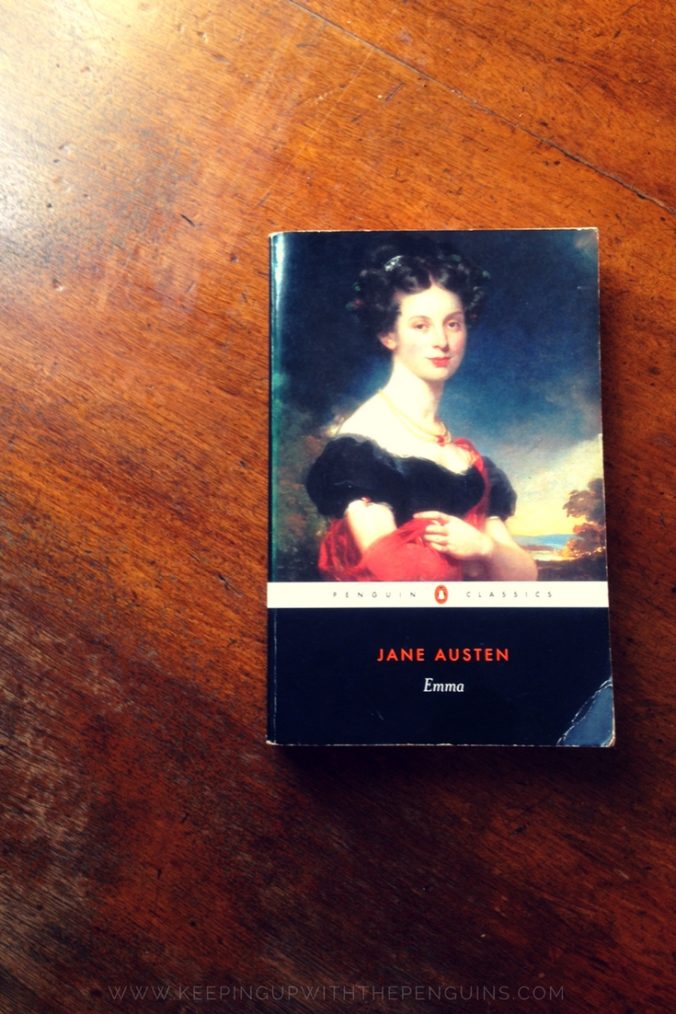 My sum total experience of Jane Austen before reading Emma was six aborted attempts to read Pride and Prejudice, and falling asleep during the Keira Knightley film adaptation. I know I’ll have to get around to reading that particular masterpiece eventually, but baby steps are the name of the game.

Emma was the last of Austen’s six novels to be completed, after the publication of Pride and Prejudice. A London publisher offered her £450 for the manuscript, and asked for the copyright for Mansfield Park and Sense and Sensibility thrown into the bargain. She told him to get stuffed, and in 1815 published two thousand copies at her own expense. She retained all of the copyright, and (more importantly) all of the bragging rights. Slay, Austen, slay!

Before she began writing Emma, Austen wrote to a friend: “I am going to take a heroine whom no one but myself will much like”. From what I can tell, later critics didn’t dislike Emma as much as they simply acknowledged that she was a flawed character (the horror!).

The book isn’t even really about her, per se. Emma is actually a satirical novel about manners, hubris, and the perils of misconstrued romance, exploring the lives of genteel women in the early 19th century and issues of marriage, gender, age, and social status. But all I knew about it before I started reading was that it was the basis of the movie Clueless.

So, the central character, Emma Woodhouse (“handsome, clever, and rich”), fancies herself to be quite the matchmaker in her small English village. She’s wealthy enough to get by without a husband of her own, but she takes great pleasure in meddling with other people’s love lives. What else was a girl to do before Tinder?

Her pet project is Harriet Smith, an unsophisticated, illegitimate seventeen-year-old girl whose only prospect for social advancement is a good matrimonial match. Now, you can look past this pretty weak and flimsy plot to read Emma as a searing class commentary on the right of the elite to dominate society… but, if that’s not your thing, you should know right now: Emma is basically The Book Where Nothing Happens.

I mean it: nothing really happens. Every scene is a visit or a party where bored rich men and women gossip about who will marry whom. Emma tries to set Harriet up with everyone, but they all fall in love with Emma (or her dowry) instead – boohoo. There’s a lot of whining about rich white-girl problems. Now and then, there’s a dramatic declaration of love or a rejected proposal to keep the wheel turning, but otherwise it’s all pretty bland. Most of the story is told through the gossip of the town of Highbury, kind of like the original Gossip Girl.

The most interesting and likeable character in Emma is the uncouth Mrs Elton. Mrs Elton has fat stacks of cash, but lacks the manners and social graces that are expected of her in “polite society”. She commits social suicide almost immediately, calling people by their first names (gasp!) and boasting about her family’s wealth (can you imagine?). Emma describes her as “self-important, presuming, familiar, ignorant, and ill-bred”, but I liked her. She was a whole lot more fun than the rest of them put together. Picture an old-timey Kath & Kim character-equivalent mixing with the upper crust: hilarious! It is Mrs Elton’s lack of social grace that reveals the hypocrisy and the ridiculousness of the gentility.

Things start to heat up a bit plot-wise towards the end (in relative terms, anyway): people get sick, peripheral characters die, there’s arguments between friends, and the very-predictable love triangle comes to a head. There’s a happy ending (i.e., everyone gets married), which pretty much makes it a 19th century beach read.

Emma isn’t a horrible book, and I didn’t hate it. Indeed, it’s quite clever and charming, in its own way. There’s some really funny bits, there’s some interesting class and gender commentary… but the pacing is positively glacial, and (as I said before) nothing happens.

In terms of this particular edition, the introduction was fine, but the footnotes were absolutely taking the piss. No kidding, there is a footnote providing the definition of “carriage”, but nothing for the word “valetudinarian” (I had to Google it, it means “a person who is unduly anxious about their health”, just so you know). I gave up on the notes a few chapters in, they just weren’t adding much to my reading experience.

My tl;dr summary of Emma would be this: if you get your jollies dissecting the idiosyncrasies of high society in early 19th century England, and don’t mind falling asleep now and then while you’re reading, Emma will make your day. If you’re chasing action and intrigue and shock-twist endings, you might want to give this one a miss.

Want to know how I got on with Pride And Prejudice? Read my full review here.

My favourite Amazon reviews of Emma:

What Do Your Bookshelves Say About You?