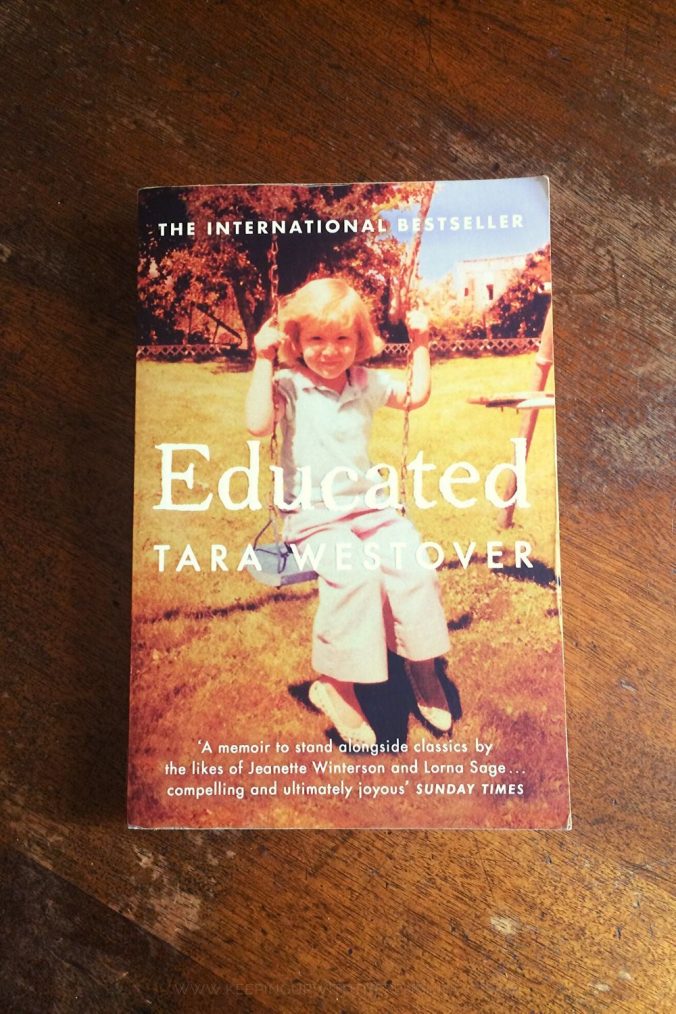 When it comes to writing memoirs, you’ve either got to have talent for storytelling or a life so fascinating that talent (or lack thereof) doesn’t matter. Luckily, Tara Westover has both. Even in the hands of a real bore, Educated – a memoir about shame, understanding, and the transformative power of education – would be an interesting read. In Westover’s voice, it’s downright enthralling.

Educated, first published in 2018, is Westover’s account of her remarkable life: growing up in a family of survivalist Mormons, leaving them to step foot in a classroom for the first time as a university student, and going on to complete a PhD at Cambridge University. The story is told in three parts, to match that chronology.

Part One begins with Westover’s birth – date unknown, sometime around the end of September, 1986 – on an isolated rural property that served as both family home and junkyard. Westover didn’t have a birth certificate for the first nine years of life. When the time came for her to get one, none of her family members could agree on their recollection of the day she was born. “I remember the day [my delayed birth certificate] came in the mail,” she says, on page 26. “It felt oddly dispossessing, being handed this first legal proof of my personhood: until that moment, it had never occurred to me that proof was required.”

Her parents were deeply suspicious of any government or organisation, be it hospitals, schools, or the tax man. Westover and her siblings grew up fearing the kind of federal intervention we’ve seen play out on the evening news, where operatives would come to take them away – and for them, the threat was a lot more tangible, and local. A 1992 siege upon the home of a like-minded Idaho family nearby resulted in three deaths; you might know it as Ruby Ridge.

Westover’s attempts to attend school or participate in any other aspect of “normal” childhood were (sometimes violently) opposed by her father. That included seeking medical attention. Educated has any number of stories of junkyard injuries that the family “treated” (homeopathically) themselves at home, and more than one serious car accident – each more stomach-turning than the last.

Despite that stumble start in life, Westover managed to “home school” herself enough to pass the required exams and gain entry to Brigham Young University. In Part Two of Educated, she details the pressures and obstacles that come from starting college at 17, having taught yourself to read with only the Bible and the Book of Mormon as reference texts.

Once Westover begins her formal education, she is reluctant – in the extreme – to tell the truth of her upbringing, her circumstances, and her needs. It’s easy, with privilege and hindsight, to shout at the page: “Just tell them! It’ll help! It’ll make things better for you!”. It takes a long time for Westover to concede that she does, in fact, need more than her upbringing gave her to survive in the world.

I’ll never forget one particularly harrowing episode where Westover finally found the courage to ask a question in class: the meaning of the word Holocaust. Her classmates were horrified, but of course, none of them knew why she asked.

I’d never learned how to talk to people who weren’t like us – people who went to school and visited the doctor. Who weren’t preparing, every day, for the End of the World.

The final section of Educated covers Westover’s opportunity to study at Cambridge, the financial assistance and mentorship she received to help her stay there – and, of course, what choosing the path of education meant for her relationship with her family, her hometown, her religion, and herself. The book learning’s not all beer and skittles, after all.

Westover writes her true history without judgement, a remarkable feat given her circumstances. She says at the end of her memoir that she’s in touch with only a few of her family members, and lives a life entirely separate from the mountain that was her first home, but she doesn’t seem to wish them ill or bear any bitterness for the life they gave her.

In the interests of a right of reply, I’ll tell you here that Westover’s parents (via their attorneys) have said that there is “only a little germ of truth” in Educated, and her brother Shawn in particular has vehemently denied the instances of abuse Westover described. Westover hasn’t given a public response to that – the book kind of speaks for itself, really, having been professionally fact-checked by the kinds of very smart and thorough people who do that kind of thing.

What Westover has lost in family, she has won in fans, hundreds of thousands of times over. Educated was an instant best-seller, and received wall-to-wall positive reviews (a frightening number of which appear as blurbs in my edition, pages and pages of them!). The book spent over two years on the New York Times Bestseller List, and has been translated into over 45 languages. As of last year, it had sold over 6 million copies worldwide.

I found Educated to be a breathtaking read, in more ways than one. The dangers and horrors of Westover’s childhood had my heart in my throat – but the moments of love and compassion shared within this bizarre family did, too. I was captivated by the way Westover was able to relate her story, with frankness and fairness that any memoir writer should envy. Naturally, I must offer any prospective readers content warnings for family trauma (and one particularly alarming incident of cruelty towards a dog, near the end), but trust me: if you can stomach it, Educated is an incredible and transformative read.

My favourite Amazon reviews of Educated: