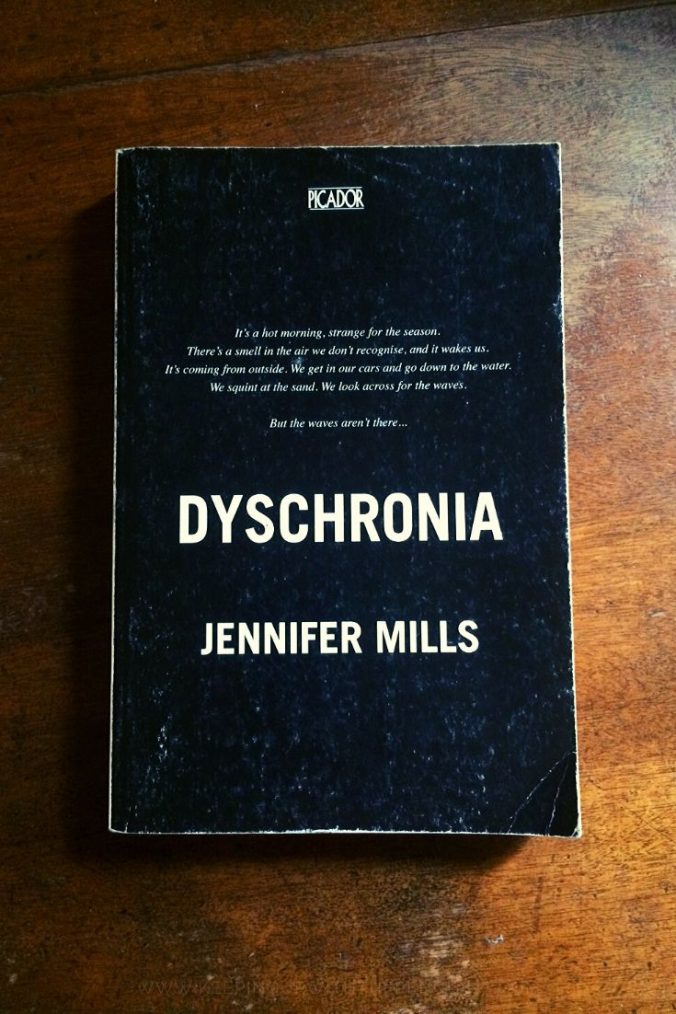 Dystopian fiction has a new face: cli-fi, or climate change fiction, is forcing us to confront our new reality. These books bring together the scary science of what we’re facing with the art of literary writing. Dyschronia by Jennifer Mills is the best example I’ve discovered so far. It was shortlisted for the Miles Franklin Literary Award in 2019, a stunning achievement for a strange and unsettling but beautifully rendered book.

Dyschronia is set on the South Australian coast in the fictional town of Clapstone. The main character, Sam, is a young girl and a teenager for most of the book, but this is not Young Adult and it’s not a coming-of-age story – definitely one for the Adult Adults. Sam is being raised by a single mother, Ivy, and she is afflicted by a mysterious illness (“dyschronia”, from which the novel draws its name). What looks from the outside to be symptoms of a migraine actually brings with it visions of a dark future. Sam can see what’s coming, and it ain’t good.

So, already we’ve got a lot at play here: visions, familial bonds, the struggles of small-town life… but what makes Dyschronia truly extraordinary is the point of view from which all this is told. Mills uses the “collective first person”, a throw-back to the days of Greek chorus storytelling. The residents of Clapstone think and act and speak as one, an interdependent entity. “We had dreams for Clapstone,” they say, “why didn’t Sam tell us?”.

For those of you who haven’t lived in a small Australian town, it’s hard for me to describe just how damn clever this technique is. There is definitely a feeling, especially when the town is under threat or facing imminent natural disaster, that the community bonds cross over into something more. You start to think, and speak, in terms of the collective. So, while Dyschronia is a contemporary surrealist sci-fi book, it’s also very much based in social realism (it seems like there’s no way those elements could merge, but in this one, they do).


Sam’s visions aren’t straightforward either. Her experience of “dyschronia” isn’t like looking into a crystal ball. Instead, she ends up straddling the present, past, and future simultaneously, and trying to piece it together isn’t easy for her, especially seeing as the visions are accompanied by crippling pain. Her eerie foresight isolates her—I mean, who wants to hang around with the girl that has to lie in a dark room and see the future every time she gets a headache? There’s some suggestion that Sam’s illness, while officially considered to be “idiopathic”, could actually have been caused by environmental contamination.

But, as anyone who would use time travel to win the lottery can attest, there are upsides to having hints as to what’s coming. After a spate of suicides (that Sam kind-of saw coming), the local asphalt plant—basically the only economic driver of Clapstone—shuts down. The remaining residents struggle to stay afloat, and Ivy’s new boyfriend, the charismatic out-of-towner Ed, tries to find a way to use Sam’s visions to “save” them all (i.e., line his own pockets, because yes, he is a confidence man). He wants to turn Clapstone into a seaside resort, with a theme park and everything, and basically bullies Sam into having visions so that she can tell him how to make it happen.

Then, one morning, Clapstone wakes up to find that the sea has retreated, like an apocalyptic tsunami in reverse. Here’s another unbelievably clever twist from Mills: she inverts our expectations of “rising” sea levels, just to keep us on our toes. The change has left a desolate landscape of soggy sand and decomposing marine life. Hardly conducive to increasing local tourism! Ed does a runner, and leaves the town with a half-built theme park, a bunch of investors waiting on returns, no foreseeable prospect of profit, and now the government bureaucracy breathing down their necks.


The townsfolk finally recognise Sam as a “real” oracle, now that they have no other choice, and end up depending on her visions to bankroll their survival. Sam feels powerless, even in that exalted position: she feels like every decision the town makes, every subsequent turns of events, is inevitable. She comes to (rightly) question whether she actually has any control over what will come to pass. Whether Sam’s visions are predictive or self-fulfilling is the central question of Dyschronia, and Mills leaves it up to you. I mean, I lean towards the latter, but other readers might feel differently—there are no “right” answers with this one.

It should be clear by this point, but just in case it isn’t, Dyschronia has a super-jumpy timeline. Normally, that would drive me nuts, BUT this is one of the very few cases where I think it’s done superbly well. It’s clear that the back-and-forth serves a purpose, serves the story. Sure, there are moments of confusion and disorientation—for Sam, and for us—but try not to double back as you read. You haven’t missed anything, I promise. All the pieces will come together before the end.

I really appreciated the way that Mills looks at the effects of climate change on “ordinary” people (the kind some might call “the quiet Australians”, ahem). Who will protect them? Who can they rely on to come to the rescue? In Dyschronia, we see the government and corporations shift the townspeople back and forth like pawns. They end up lost in the never-ending chess tournament of bureaucracy. This is a particularly terrifying book in that it all feels very plausible, even with the time-travelling and whatnot.

Honestly, there’s so much going on with this one, it’s difficult to cram it all into a single review. Dyschronia is one of those books that you could read a dozen times, and still see something different on each go-round. You’ll come for the beautiful, lyrical writing, but you’ll stay for the complexity and intricacy of the world that Mills has built. It’s Australian speculative fiction, with echoes of Erin Brokovich and The Time Traveler’s Wife, told in a classic Greek chorus style, about a future that feels all too imminent.