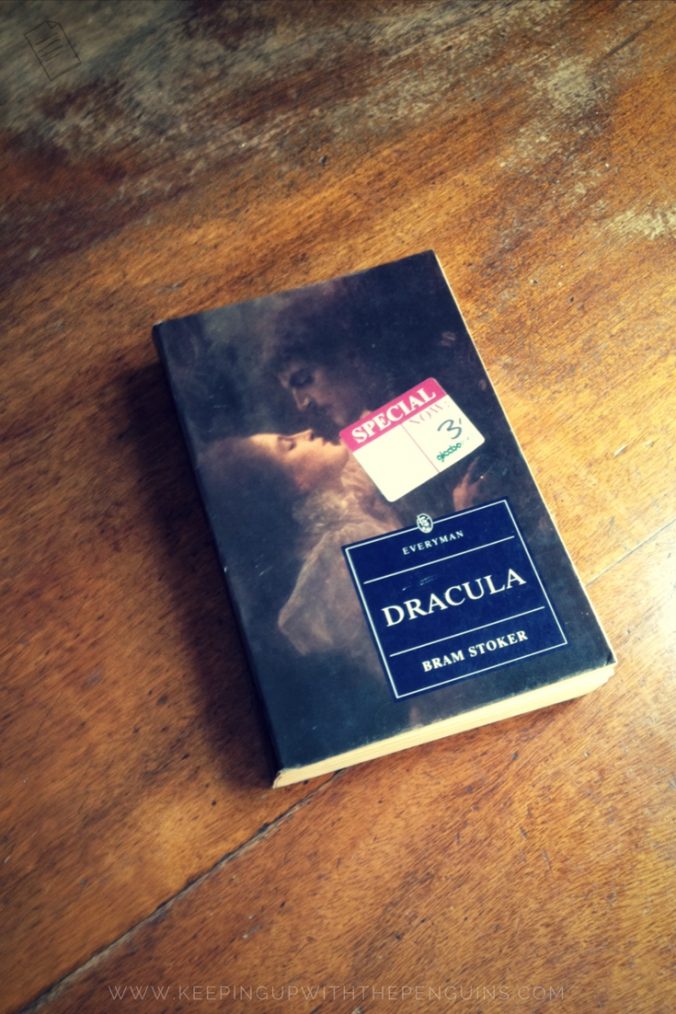 I was casually strolling past the secondhand bookstore a couple of months ago, minding my own business, when this bad boy peeked out from the bargain bin, advertising itself at the irresistibly reasonable price of $3. Normally, such circumstances would be cause for much rejoicing, except that they came the day after I had promised my husband I would purchase no more books until after our honeymoon (an ill-fated attempt at fiscal responsibility). I had some shame-faced ‘splaining to do when I came home with a brand new copy of Dracula under my arm (even if it was one of the best book bargains ever).

Think what you will, but I’ve never seen Buffy the Vampire Slayer, I’ve never read Twilight or any other semi-erotic watered-down vampire romances, and I’ve avoided basically all vampire-themed pop culture since I was a child (when I discovered, thanks to the selection of spooky books at the local library, that vampires scared the pants off me). So, I came at Bram Stoker’s Dracula with a very clean slate.

Stoker didn’t write the first vampire novel (Dracula was published in 1897, and there were at least a handful of others that appeared before that), but his work has certainly been the most enduring. At first, it garnered pretty much the same reception as Twilight has had today – the hoi polloi enjoyed it well enough, but it was ignored as second-rate nonsense by literary critics right through until the second half of the 20th century.

The shift in public opinion came with the emergence of psychoanalysis. All of a sudden, Stoker’s book could be read as an expression of pretty much any kind of “sexual deviance” you can imagine: female sexual empowerment, homoeroticism, interracial fucking, incest and/or pedophilia… pick your poison. Attention from the literary elite and popularity with the masses finally evened out with the advent of film adaptations. As of 2009, Dracula had featured as a major character in approximately 217 films (and, here’s a fun fact, that’s second only to Sherlock Holmes, who has featured in 223).

Still, Stoker barely made a dime off the original publication. He was forced to apply for literary grants towards the end of his life, and the note on the author in the front of edition has the best closing line ever:

Dracula (Note On The Author)

The story of Dracula‘s migration from Transylvania to London (in search of new blood and young dames) is told through a series of letters, diary entries, and newspaper articles – making it an epistolary novel. We start out with newly-minted solicitor Jonathan Harker starting a detailed diary of his journey to Transylvania to meet with the Count. He describes his initial days there, and the dawning realisation that he is a prisoner in the castle where his host is a literal monster who sleeps in a coffin and summons wolves to eat people.

I don’t want to cast any aspersions, but ol’ Jonno was a bit slow on the uptake (as are pretty much all of the characters, really – they should have spent less time writing in their diaries and more time watching what was going on around them).

Just as Jonno is making his exodus from Casa de Creepy, his diary entries stop, and we shift to the letters and journals of his wife and her best friend. They’ve been holidaying at the beach, and weird shit starts happening there too. There’s a massive storm, a missing dog, a shipwrecked boat with no one on board except a dead captain, and the friend sleepwalks right into the arms of an honest-to-gosh vampire. Mrs Jonno doesn’t seem to realise that all of this is weird, though. She’s too busy practicing her shorthand and wondering where the fuck her husband has got to.

At this point, Jonno and his missus both disappear from the story for a bit, and we flip back and forth between newspaper articles describing the apparent illness of the wife’s friend (must’ve been a slow news day), and a wolf that escaped from the zoo. A bunch of the friend’s ex-lovers gather to her bedside, and one of them calls in his doctor mate – Van Helsing – to see if he can sort her out. In the end, though, she dies, and Van Helsing has them cut off her head and stuff her mouth full of garlic.

It’s a bit of a bummer, but everyone seems to just keep calm and carry on. Van Helsing definitely has the hots for Mrs Jonno, he won’t shut up about how she’s “just as smart as a man” and “God must love her a whole lot”… which is probably why everyone freaks the fuck out when Dracula goes after her.

All of the Madonna-whore subtext just bubbles over at this point in the story, and – just to make sure you haven’t forgotten about those super-important Victorian gender roles – all of the MEN go about BEING MEN and devise a VERY MANLY PLAN to slay the evil vampire. This all carries on for quite a while. It gets a bit Moby Dick-esque actually: all the way down to the last 20 pages and the chase is on, but where’s the bloody pay-off?

They do finally catch the bad guy, and Mrs Jonno is saved, woohoo. I flick the final page, only to find that the editors have included a stack of explanatory notes at the end… with not a single mark in the actual text to indicate where they apply. Super helpful guys, thank you so much, I hope you treated yourself to a boozy lunch after mocking up that lay-out.

I can see why other people are really into Dracula, all the key elements are there, but… meh. Not for me. It feels like I’ve read a stack of these lately (Strange Case of Dr Jekyll and Mr Hyde, for instance) where there’s a floppity jillion interpretations of the text: Freudian, feminist, queer, post-colonial, Marxist, anthropological… by this point, I’ve run out of -ials and -ists. I’m exhausted, guys! It’d be nice to read a book that’s just about what it’s about for once. Luckily, there’s one coming up, stay tuned…

My favourite Amazon reviews of Dracula:

Do You Use Your Local Library?